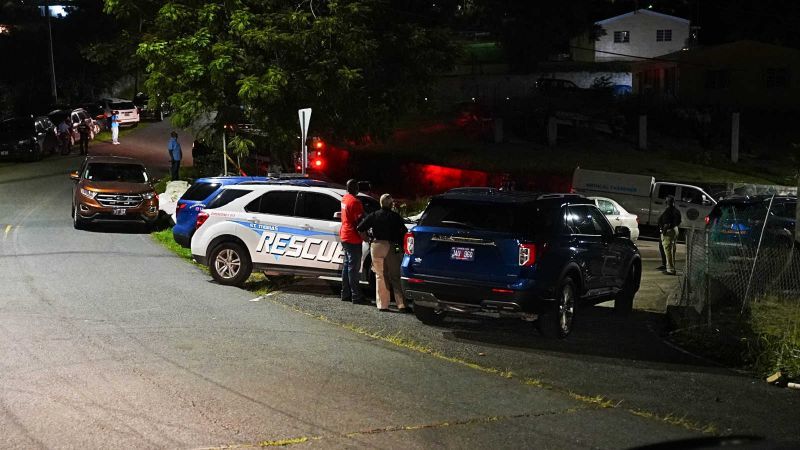 The USVI Police Department revealed during a press briefing Saturday afternoon that it had no suspects in custody relative to shootings in St. Thomas Friday that left three people dead. The department also revealed the identity of two of the three deceased victims and said weapons were not recovered from any of the crime scenes.
Even so, police leadership — outgoing V.I.P.D. Commissioner Trevor Velinor was not present — said they would tirelessly pursue the suspects until they are brought to justice.

"We have had a plague of violence recently, and I would like to assure all the members of the Virgin Islands community — especially the Virgin Islands community members that reside in the Smith Bay area, the Fortuna area and throughout St. Thomas and Water Island that this police department has taken proactive steps to ensure the safety of everyone in the community," said St. Thomas-Water Island Deputy Chief Richard Velasquez.

"We have stepped up our patrols, we have called in individuals who may have been off duty and we have called in units specialized in other investigative activities to come and assist our Criminal Investigation Bureau and our Patrol Division."

He added, "Ladies and gentlemen please understand this, the Virgin Islands Police Department... will continue to maintain the safety of our community members and more importantly we want to ensure you that no stone will be left unturned until we bring those individuals or individual to justice."

V.I.P.D. Public Information Officer Toby Derima revealed to the Consortium ahead of the press briefing that the 911 emergency call center received notification of a Fortuna/Bordeaux shooting and man down at 6:27 p.m. Friday. Officers traveled to the scene and found an unresponsive Black male with a single gunshot wound, he said. The victim was identified as 38-year-old Donald George of Fortuna/Bordeaux.

Later Friday, the 911 Emergency Call Center at 11:20 p.m. received calls from concerned residents of multiple gunshots in Smith Bay and one gunshot victim. However, upon arrival to the scene, officers met two victims, though one died on the scene while the other victim succumbed to his injuries at the Schneider Regional Medical Center, according to Mr. Derima.

The victim who died on the scene was identified by next of kin as 42-year-old Camille W. King, Jr. The identity of the second male of the Smith Bay shooting was unknown Saturday, said St. Thomas-St. John Police Chief Steven Phillip.

Assist. Police Commissioner Mario M. Brooks said the three homicides in one day was "very disturbing and we should be angry." He said the St. Thomas-St. John District had gone 100 days without a homicide prior to Friday's incidents. "If we can accomplish this in one district, we can do it in both district," Mr. Brooks stated. "As a matter of fact we can double those days from 100 to 200 and so on. As a community we can control our own story."

The assistant commissioner called on the community to provide information to police that could lead to the apprehension of criminals. "Those of you who know these trigger pullers, stop protecting them," he said. "Turn them in, report them, let us get them off the streets. Because they have no fear of being caught, they continue because they're confident that no one will say anything."

The St. Thomas shootings carried the territory's total for 2021 to twenty-five, with nineteen on St. Croix, five on St. Thomas and one on St. John. A week before the St. Thomas incidents, police found the unresponsive body of a man at the Altona Lagoon on St. Croix with multiple gunshot wounds. He was identified by next of kin as 38-year-old Nicholas A. Miller.
#the Virgin Islands