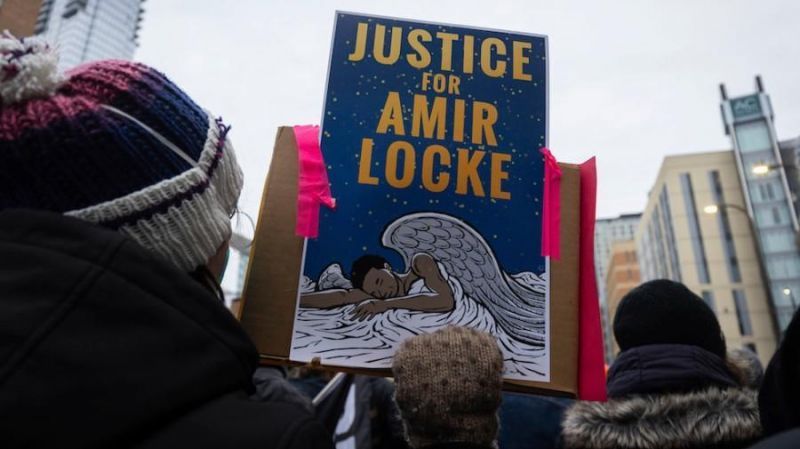 No charges will be filed against the police officer who fatally shot 22-year-old Amir Locke during an early morning no-knock warrant raid at a Minneapolis apartment in February.
Hennepin County Attorney Michael Freeman and Minnesota Attorney General Keith Ellison said in a Wednesday news release that there was “insufficient admissible evidence” to criminally charge Minneapolis Police Department (MPD) officer Mark Hanneman, who shot and killed Locke, or any other officer involved in the shooting.

Prosecutors said they could not prove beyond a reasonable doubt that Hanneman violated the state’s use-of-deadly-force statute, as they noted Locke had aimed a weapon in the direction of “at least one officer” before he was shot. They also said the officers were conducting a raid related to a homicide and suspects were known to possess firearms.

“Amir Locke’s life mattered. He was a young man with plans to move to Dallas, where he would be closer to his mom and – he hoped – build a career as a hip-hop artist, following in the musical footsteps of his father,” Freeman and Ellison wrote in the press release.

“After a thorough review of all available evidence, however, there is insufficient admissible evidence to file criminal charges in this case,” they continued.

In early February, the MPD’s SWAT team served a no-knock warrant at the Bolero Flats apartment in downtown Minneapolis for a suspect in a homicide. Locke was not a suspect on the warrant.

Body-worn camera footage shows officers breaking into the apartment in the early morning hours. The disturbance awakened Locke, who had been sleeping on the couch.

When Locke saw the police, a still image of the footage showed the young man with a gun, which police said he pointed at officers. He was shot multiple times.

The shooting of Locke in the city of Minneapolis — where George Floyd and Daunte Wright were also killed by police in the past two years — led to protests and renewed calls to end the use of no-knock warrants.

On Tuesday, Mayor Jacob Frey announced a new policy prohibiting the use of no-knock warrants by the MPD and requiring officers to repeatedly knock and announce their presence before entering a location.

“We accomplished what we set out to do,” said Frey in a statement. “This policy is among the most forward-looking and extensive in the nation and will help keep both our residents and officers safe.”

Prosecutors on Wednesday said their examination of whether to file criminal charges did not include an evaluation of the decision to seek a no-knock warrant.