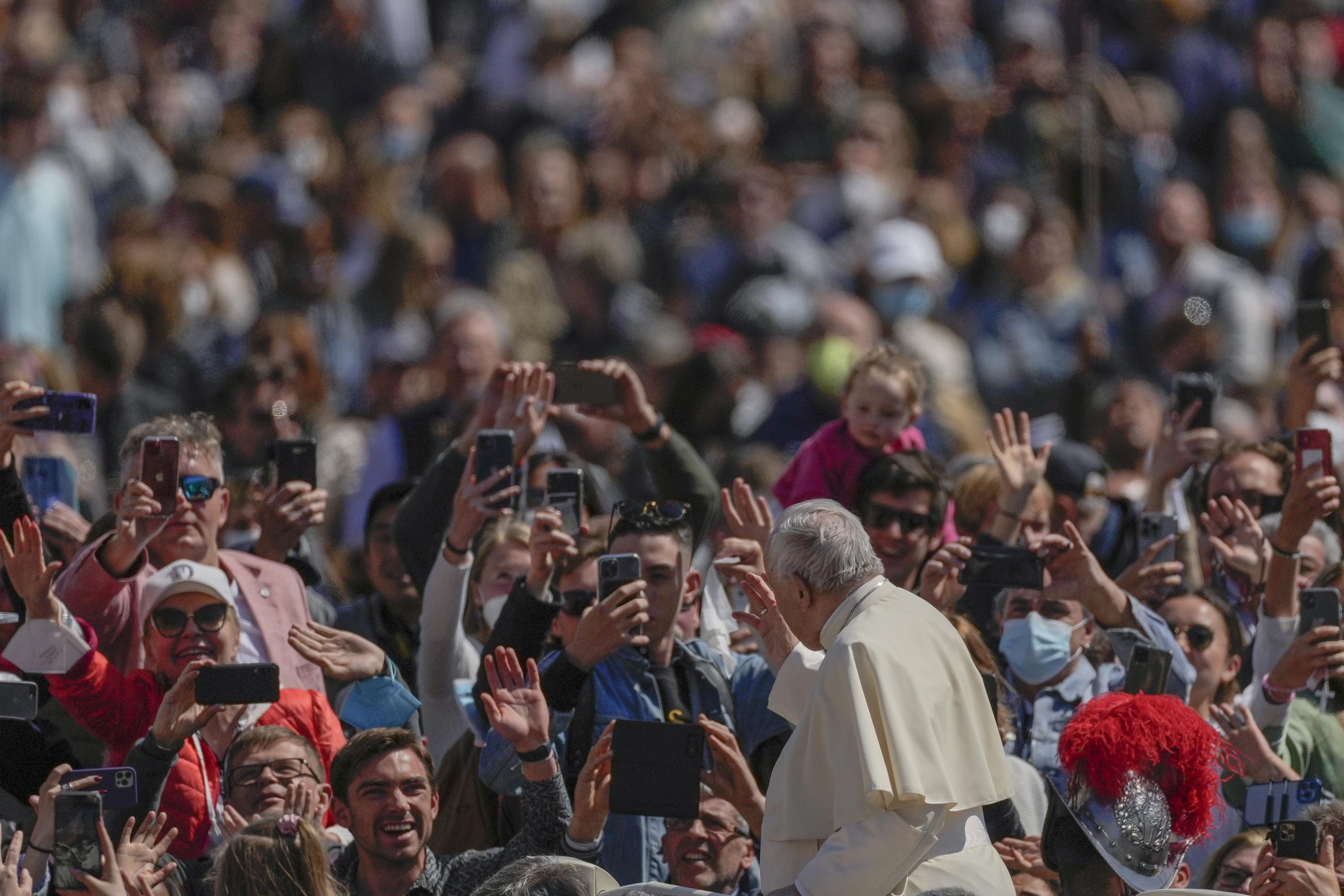 On what is supposed to be Christianity’s most joyful day, Pope Francis made an anguished Easter Sunday plea for peace in the “senseless” war in Ukraine and in other armed conflicts raging in the world, and voiced worry about the risk of nuclear warfare.
“May there be peace for war-torn Ukraine, so sorely tried by the violence and destruction of this cruel and senseless war into which it was dragged,” Francis said, speaking from the central balcony of St. Peter’s Square.

The pontiff had just finished celebrating Easter Mass in the square packed by faithful for the holiday for the first time since the pandemic began in early 2020. Applause erupted from many of the crowd, estimated by the Vatican to number 100,000 in the square and on a nearby avenue, when he mentioned Ukraine.

“Please, please, let us not get used to war,″ Francis pleaded, after denouncing ”the flexing of muscles while people are suffering.” Yet again, the pontiff didn’t cite Russian President Vladimir Putin for the decision to launch the invasion and attacks against Ukraine on Feb. 24.

People’s hearts are filled with “fear and anguish, as so many of our brothers and sisters have had to lock themselves away in order to be safe from bombing,” the pontiff said.

“Let us all commit ourselves to imploring peace, from our balconies and in our streets,″ Francis said. ”May the leaders of nations hear people’s plea for peace.”

In a clear reference to the threat of nuclear warfare, Francis quoted from a noted declaration of 1955: “‘Shall we put an end to the human race, or shall mankind renounce war?’”

He was quoting from a manifesto written by philosopher Bertrand Russell and physicist Albert Einstein. The manifesto’s text, sounding a grim warning against the consequences of nuclear warfare, was issued a few months after Einstein died.

Meanwhile, in Britain, the leader of the Anglican church, Archbishop of Canterbury Justin Welby, called for Russia to declare a cease-fire and withdraw from Ukraine.

Noting that in the Eastern Orthodox church followed by many in Russia and Ukraine Sunday marks the start of Holy Week — with Easter coming on April 24 — Welby exhorted Russia to withdraw from Ukraine and commit to talks.

Francis also drew attention to other wars in the speech known by its Latin name “Urbi et Orbi” — to the city and to the world.

“May the conflict in Europe also make us more concerned about other situations of conflict, suffering and sorrow, situations that affect all too many areas of our world, situations that we cannot overlook and do not want to forget,″ Francis said.

Two days after Palestinians and Israeli police clashed in Jerusalem, Francis prayed that “Israelis, Palestinians and all the inhabitants of the Holy City, together with pilgrims, experience the beauty of peace, of living in brotherhood and of accessing Holy Places” in reciprocal respect.

He called for peace and reconciliation for the peoples of Lebanon, Syria, Iraq and Libya.

Francis spoke plaintively about Yemen, “which suffers from a conflict forgotten by all, with continuous victims.” He expressed hope that a recent truce would restore hope to that country’s people.

He also prayed that God grant “reconciliation for Myanmar, where a dramatic scenario of hatred and violence persists,” and for Afghanistan, which is gripped by a humanitarian crisis, including food shortages.

Francis denounced the exploitation of the African continent and “terrorist attacks — particularly in the Sahel region,” as well as the humanitarian crisis in Ethiopia and violence in Congo.

In Latin America, many have seen their plight worsen during the coronavirus pandemic, aggravating social problems stemming from corruption, violence and drug trafficking, the pontiff said.

But Francis found hope in the “open doors of all those families and communities that are welcoming migrants and refugees throughout Europe,″ referring to the some 10 million people who have either fled Ukraine or are internally displaced by the war.

At the Polish border station of Medyka, a paramedic from Warsaw helped set out a traditional Easter breakfast with ham, cheese and Easter cakes for some of the latest refugees from Ukraine, the majority of whom have streamed into neighboring Poland.

“They lost their homes. They are seeking refuge in our country,” said volunteer Agnieszka Kuszaj. She hoped that the meal would help them “forget for a moment about all the terrible things” that have happened.

Maria Dontsova, 31, who is from Kharviv, the heavily bombed city in eastern Ukraine said: “I wish all families peace who are suffering in Ukraine at this great holiday Easter.” Speaking in English, she expressed hope that war will end “as soon as possible, and people stop suffering, and we can prevent the war (from) spreading to Europe”

Earlier, the pontiff, who has a knee ligament problem, limped badly as he made his way to an altar set up in front of St. Peter’s Basilica. After Easter morning Mass, Francis boarded the white popemobile for a whirl through the square among the cheering ranks of the crowd.

In Spain, believers and secular enthusiasts flocked back in large numbers to Holy Week processions this week for the first time since the start of the pandemic after most health restrictions were lifted.
#Pope Francis  #Afghanistan  #Coronavirus