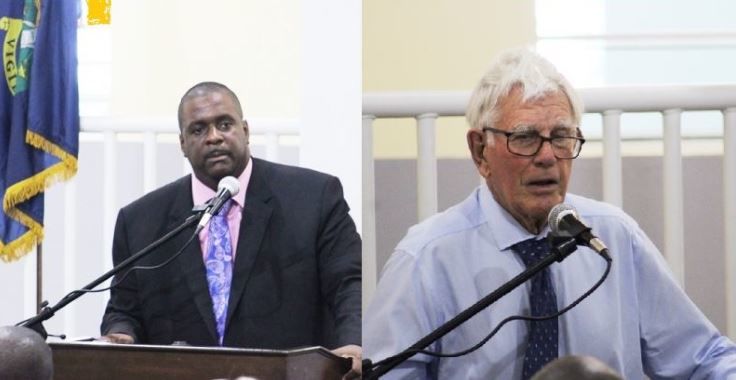 Mr Haycraft passed away in the early hours of today, May 29, 2021, according to his daughter Julie Haycraft Wills.

Premier Fahie, in a Facebook post, said he is "indeed deeply saddened" to learn of the passing of Mr Peter Haycraft who he said became a household name in the Virgin Islands with the introduction of Riteway Food Markets and Cash and Carry.

The Premier recalled that Mr Haycraft migrated to the Virgin Islands in 1959 to run a ferry service between Tortola and St Thomas and that he was one of the original organisers of the BVI Spring Regatta – now recognised today as one of the Caribbean’s leading sailing events. He recalled too that Mr Haycraft served as the Commodore of the Royal BVI Yacht Club on 13 occasions.

“Following the 2017 hurricanes, Mr Haycraft contributed substantial funds to rebuild Enis Adams Primary School into a modern educational facility, where his wife Mrs Penny Haycraft has worked as a teacher. We were able to celebrate the completion and handing over of this project with him.” 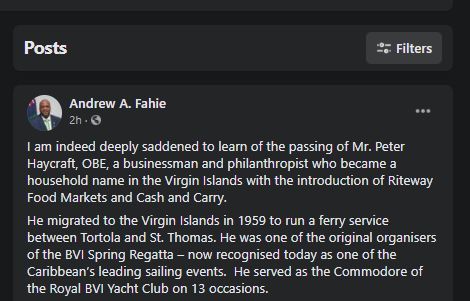 Premier Andrew A. Fahie, in a Facebook post today, May 29, 2021, said he is indeed deeply saddened to learn of the passing of Mr Peter Haycraft who he said became a household name in the Virgin Islands with the introduction of Riteway Food Markets and Cash and Carry.

Unwavering commitment to development of VI

Premier Fahie added that Mr Haycraft has indeed made contributions to many worthy causes in the Territory, adding that his passion for business development can be seen in Island Shipping and Tropical Shipping.

“On behalf of the Government and people of the Virgin Islands and my family, I express our condolences to his family, his wife Penny, his daughters Julie and Susan and his son Chris. May God continue to be with them during this difficult time.

“We thank Mr Haycraft for his unwavering commitment to the development of the Virgin Islands.

“May his legacy and memories continue to be with us all,” Premier Fahie said.