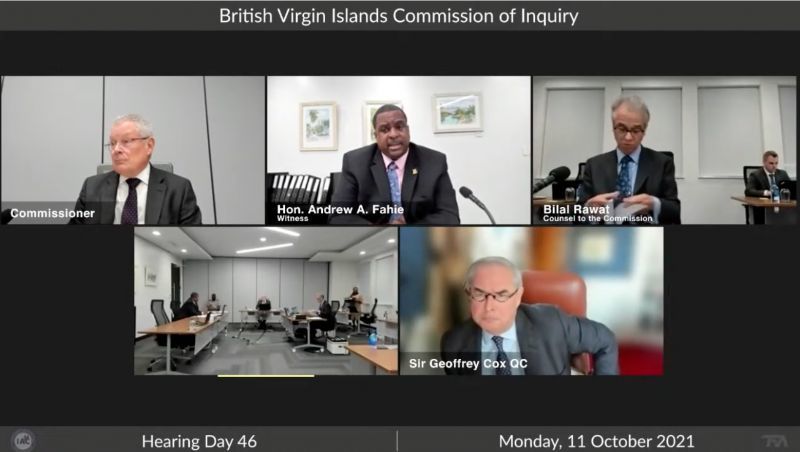 Premier wary about being grilled on incomplete & unpublished AG report

Virgin Islands Premier and Minister of Finance, Hon Andrew A. Fahie has raised serious concerns about the United Kingdom-sponsored Commission of Inquiry (CoI) and its use of an alleged unpublished Auditor General's report that may not have followed due process and was never made public, at least 'to the best of his knowledge'.

During the hearing of Day 46 of the CoI streamed live on October 11, 2021, Premier Fahie staged a verbal rebuttal against the CoI pressuring him to answer questions on a report by Auditor General (AG) Sonia M. Webster on the Virgin Islands Neighbourhood Partnership Project, a report that was never officially released, according to the Premier.

Premier raised concerns about the report

The Premier expressed the concern that the report may be incomplete, given it had no supporting evidence and may not have followed due process since it was never made public and, ahead of the CoI, was only made preview to him through several media leaks.

“I am going to be asked as your base, your foundation for this today, of an Auditor General’s report that was never made public since 2008,” Premier Fahie said.

CoI Commissioner Sir Gary R. Hickinbottom; however, stated that the CoI has made the report public; however, Premier Fahie did not bite the bait.

The Premier indicated that as is customary with an AG report, the subject document was lacking draft notes, names of persons interviewed, and a response from the Ministry.

Draft or final report? Commissioner could not say

Hon Fahie highlighted that there was uncertainty on whether the report was finalised or whether it was still in its draft stage.

The Premier said if it was a final report, then it should be accompanied by a response from the Ministry in the final report to know that due process would have been allowed.

“This report, as far as all records in government that I can have access to, I cannot recall it ever being public,” he said.

Hon Fahie revealed that he has never seen the report before the arrival of the CoI and said that persons accused in the report may not have received an opportunity to defend themselves.

Premier Fahie said the uncertainty of the report being used as a foundation for the CoI questioning at that particular hearing also puts witnesses in a very peculiar position when giving evidence.

Despite his concerns, the commission said he still considered the AG's report as evidence and asked the premier to do his best to answer the questions regarding the report.

Premier Fahie said he found it difficult to understand why he is being asked to comment on a report that he cannot be told whether it is complete or still in the draft stage.