Hon Wheatley, while being interviewed live on WTJX-TV, said his delegation included Deputy Premier and Minister for Communications and Works Hon Kye M. Rymer (R5) and Minister for Natural Resources and Labour Hon Melvin M. Turnbull (R2) and their spouses.

The swearing-in of Governor Bryan and Lt Governor Roach was done at Emancipation Garden on St Thomas. 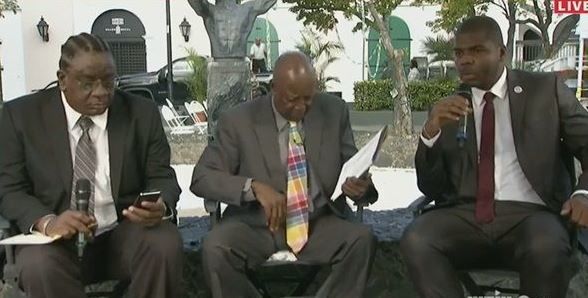 Premier and Minister of Finance Dr the Honourable Natalio D. Wheatley (R7), right, while being interviewed live on WTJX-TV at the swearing-in of USVI Governor Albert A. Bryan Jr today, January 2, 2023.


Governor Bryan, after his swearing-in, told the people there that in the epic words of Buju Banton, “it’s not an easy road”.

He thanked his Lt Governor Tregenza A. Roach, who he described as the best Lieutenant Governor in the world’.

Among other things, Governor Bryan said the COVID-19 times were especially very challenging times for everyone and may have caused him to grow more grey hairs.

He said his government was, nevertheless, proud of its many accomplishments, including being able to stabilise the territory’s finances and put more money in the pockets of the people.

Governor Bryan also said victory should never be, and for him will never be, about winning elections but about uplifting the people.

The 35th Legislature of the US Virgin Islands (USVI) will be sworn in next week Monday, January 9, 2022, at Emancipation Gardens.
#COVID-19  #Covid