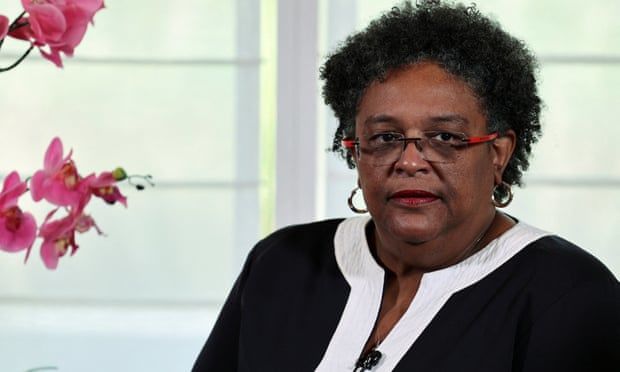 The prime minister of Barbados, which became the world’s newest republic after removing the Queen as its head of state last year, has described King Charles III as a “man ahead of his time” because of his environmental views and commitment to young people, and noted his recent recognition of the atrocities of slavery.

Speaking to the BBC World Service programme The Newsroom on Saturday, Mia Mottley also paid tribute to the Queen, who congratulated the Caribbean island on a “momentous” day when it became a republic in November last year.

“Very few others have surpassed what she was able to achieve,” said the prime minister. “The stability which she brought to the passage of the United Kingdom from that of an empire to one of the leading developed countries of the world reflects her ability to recognise that change was happening.”

Mottley referred to King Charles as both “a friend of Barbados” and “a man ahead of his time” because of his early championing of environmental, architectural and social causes.

“What has stood out for me is his commitment to the environment, to biodiversity, to urban renewal [and] to architectural integrity,” said the prime minister.

“But above all else, to creating pathways for young people, particularly those who may be at risk and who may not be seen, heard or felt by others in their communities or their families.”

Mottley, who has been in office since 2018, said Charles had clearly recommitted to “the bonds of friendship” between the UK and Barbados when he visited the island to witness the transition.

Charles used the visit to address the UK’s colonial actions and legacy, condemning the “appalling atrocity of slavery” that “forever stains our history”. 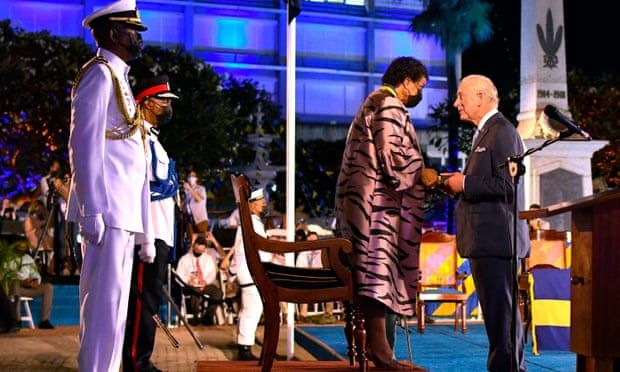 Charles receives the Order of Freedom of Barbados at the republic declaration ceremony.

He returned to the issue at the Commonwealth heads of government meeting in Rwanda in June this year, stressing the importance of acknowledging “the wrongs which have shaped our past”.

Charles said he and his wife, Camilla, had been struck on a recent trip to Canada by how indigenous and non-indigenous people in the country were now “reflecting honestly and openly on one of the darkest aspects of history”.

There were, he added, lessons to be learned for the Commonwealth.

“For while we strive together for peace, prosperity and democracy, I want to acknowledge that the roots of our contemporary association run deep into the most painful period of our history,” he said.

“I cannot describe the depths of my personal sorrow at the suffering of so many, as I continue to deepen my own understanding of slavery’s enduring impact.”