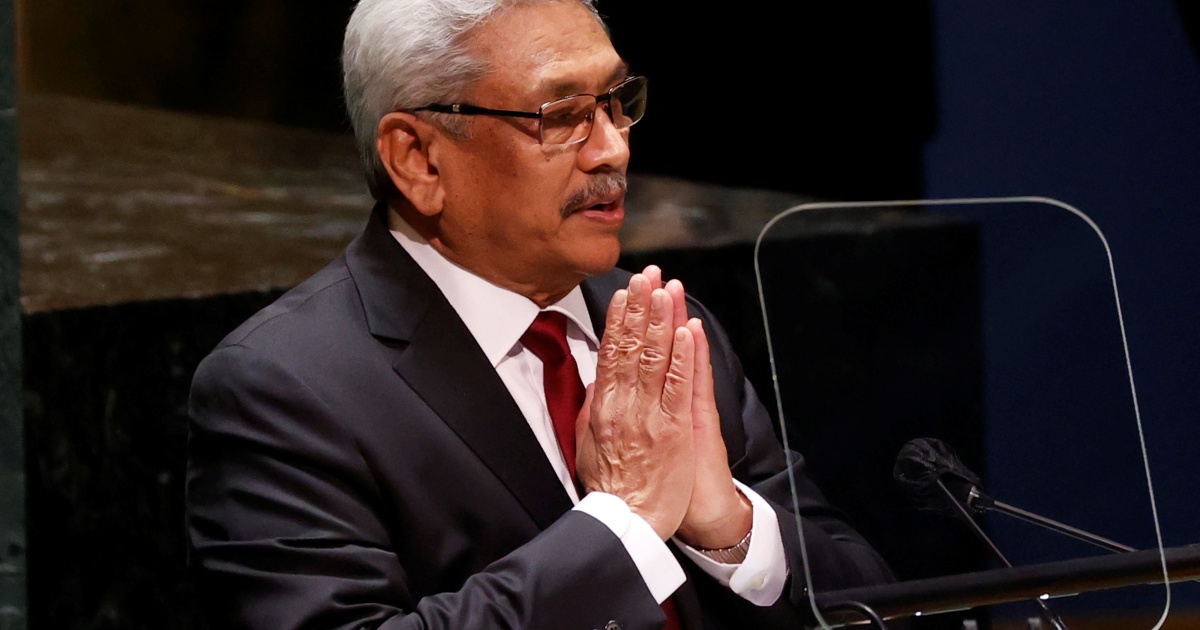 The International Truth and Justice Project says Gotabaya Rajapaksa committed grave breaches of the Geneva Conventions during the civil war.

A rights group documenting alleged abuses in Sri Lanka has filed a criminal complaint with Singapore’s attorney general, seeking the arrest of former President Gotabaya Rajapaksa for his role in the island nation’s decades-long civil war.

In its 63-page complaint filed on Saturday, the International Truth and Justice Project (ITJP) said Rajapaksa committed grave breaches of the Geneva Conventions during the last days of a 25-year-long civil war when he was the country’s chief defence official.

Sri Lanka ended the civil war between separatist rebels from the ethnic Tamil minority and government forces in 2009. Rights groups accused both sides of abuses during the war.

The South Africa-based ITJP argued that based on universal jurisdiction, the alleged abuses were subject to prosecution in Singapore where the 73-year-old former leader fled after months of unrest over his country’s worst economic crisis in decades.

Rajapaksa submitted his resignation from Singapore, a day after fleeing on July 13, when anti-government protesters stormed the offices and official residences of the president and the prime minister.

“We believe he has a case to answer. The legal complaint argues that Gotabaya Rajapaksa committed grave breaches of the Geneva Conventions and violations of international humanitarian law and international criminal law during the civil war in Sri Lanka which include murder, execution, torture and inhuman treatment, rape, and other forms of sexual violence, deprivation of liberty, severe bodily and mental harm, and starvation,” she said.

“Gotabaya in September 2008 ordered the immediate withdrawal of the United Nations and relief agencies from the war zone in order to ensure that there would be no witnesses to the carnage that was unleashed on [Tamil] civilians by the Sri Lankan army. Our submission to the attorney general calls for the arrest, investigation and indictment of Gotabaya Rajapaksa. That is the basis of our case.”

The ITJP assisted in two civil lawsuits against Rajapaksa, proceedings for one of which were served in a California parking lot in 2019. Rajapaksa was a US citizen at the time.

Both cases were withdrawn after Rajapaksa was granted diplomatic immunity upon becoming president later that year.

Rajapaksa could not be reached for comment through Sri Lanka’s High Commission in Singapore. He has previously strenuously denied allegations he was responsible for rights abuses during the war.

A spokesperson for Singapore’s attorney general did not respond to a request for comment. The country’s foreign ministry has said Rajapaksa entered the Southeast Asian city-state on a private visit and had not sought or been granted asylum.

Shubhankar Dam, a professor at the University of Portsmouth School of Law in Britain who has taught in Singapore, said while its courts were able to try alleged war crimes, genocide, and torture, it has repeatedly stated that such jurisdiction should only be invoked as the last resort.

“While neutrality is not officially enshrined in Singapore’s foreign policy, it has long cultivated a form of even-handedness,” Dam said.

“Any decision to prosecute a former foreign head of state has to be balanced against its foreign policy objectives.”