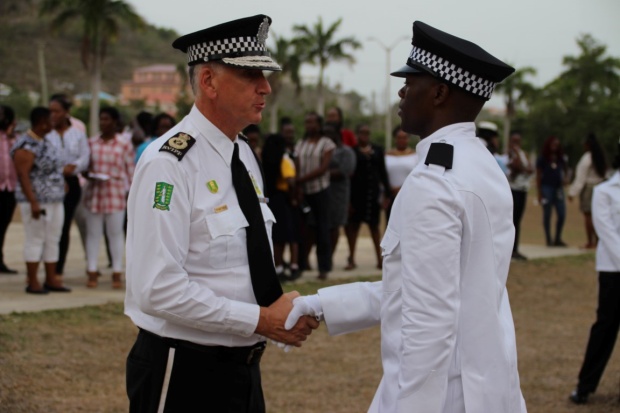 RVIPF sees 9 local recruits; presently 24% of force are virgin islanders, “the aim is not to have an all local force but for the force to represent the BVI’s diverse society.”

In response to a question posed by the media, Commissioner Matthews said, “We have been allowed to recruit again this year, even at a time when the economy is shrinking we are hoping to bring in twelve new recruits this year and I can tell the good people that are here today, that the good news on that front is that as it sits on paper, of course we have to do their background checks but nine of those twelve are BVI Islanders, born and bred.”

In an invited comment by our agency Commissioner Matthews further stated, “We have always had born and bred BVI Islanders working within the Royal Virgin Islands Police Force.

We have about twenty-four percent at the moment, that is roughly the make-up and of course I am a big fan of localism because I think you have a vested interest in protecting your own country and your own territory and your own home. But I also have to recognize that the BVI is a very diverse place to live and is made up of numerous populations.

Policing is supposed to reflect the community that it serves, so I could never sign up to a hundred percent BVI Islander force. It’s about finding that balance but certainly over the last two years or so we have been recruiting, we have been actively trying to target BVI Islanders in particular and local people simply because we want to address the balance better than it has been in the past and the good news is that we are seeing and we have seen born ad breed BVI Islanders moving through the ranks into of the force into some of the more senior positions and that’s good because they have an investment in the territory.”

Premier Fahie in an invited comment in response to the nine local recruits said, “Well I thank God that it is happening, it is very important because as well build this county to be what I could consider one of the greatest nations to be built in the years to come.

We have to build it on our people. Where we are lacking in expertise in certain areas we welcome to have persons to come in but we also have to use that expertise when it comes to training our people and we also have to use our education system to build on any area where we are lacking. But at the end of the day we have to build it with our people and when I say so I mean persons who have come here and made it their home.

So when I say our people those are also included in it and that is good news. We have made sure that the funding is available for the recruitment of officers both in Her Majesty’s Customs and Immigration and in the police force, we have spent millions of dollars in law enforcement and we continue to do so.”
#John J. Rankin  #Andrew A. Fahie  #Fahie  #the Virgin Islands