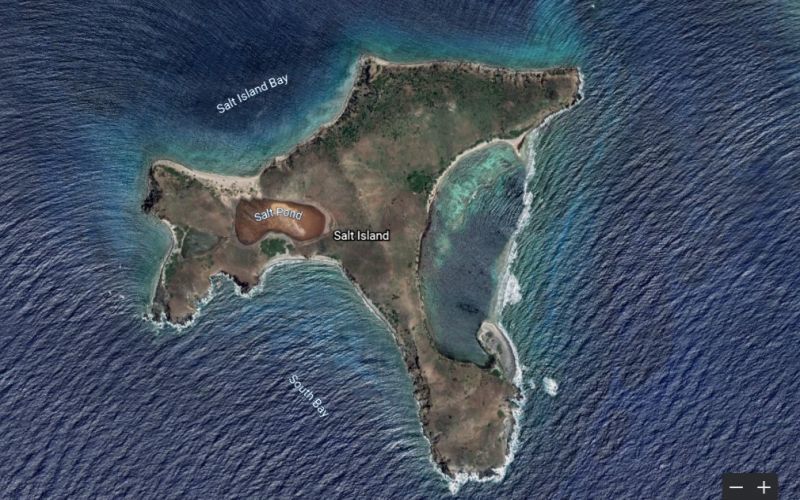 Salt Island is my ancestral homeland. Navel strings buried on Salt Island, my paternal grandfather, mother, father, several siblings, and other close family members claim Salt Island as the land of their birth. Nonetheless, Salt Island and generations of Salt Islanders (Cay/Key people) were a forgotten island and people.

Regrettably, Salt Island and its people suffered the usual fate of a small island in an island chain---NEGLECT. As such, Salt Islanders' descendants need the same fair and equal treatment enjoyed by sister communities regarding land distribution, i.e., Nibbs estate in Sea Cow Bay, Nottingham Estate in Long Look, and Anegada.

Salt Island, which derived its name from its salt ponds (two ponds comprising approximately 12 acres), is a tiny 0.3 acre mostly hilly terrain island in the Virgin Islands (British) archipelago. It is part of the Southern Cays, including Ginger Island, Cooper Island, Peter Island, and Norman Island. Lying at 18.3709°N, and 64.5274°W, located approximately 4.7 miles southeast of Road Town (Capital of Tortola, and VI), is sandwiched between Cooper Island to its east and Peter Island and Deadman's Chest ('Detchist' to Salt Islanders) to its west with its highest elevation being approximately 374 feet (114 meters).

Salt Island and its people have a storied, rich history and legacy. Nevertheless, the Salt Island story in the print and electronic media and elsewhere primarily refers to its iconic salt ponds and the sinking of the RMS Rhone, a UK Royal Mail Ship. Before the widespread availability of marine refrigeration, ships' demand for Salt Island salt was in huge demand for seasoning and preserving fish and meat; refrigeration availability contributed to the decline in demand. Further, on October 29, 1867, a hurricane (San Narcisco, Category 3) struck and wrecked the RMS Rhone, with only 23 of the 146 crew and passengers surviving the wreck.

Some of the bodies drifted up on Salt Island shore. Salt Islanders buried them in a mass grave at the western end of the island; when the island was inhabited, Salt Islanders maintained the gravesite; It is one of four burial sites. Moreover, it is perhaps an urban legend but the word on the street over the years was that Queen Victoria decreed that because of Salt Islanders' care and compassion for the deceased, they and their descendants should occupy Salt Island for their use, quiet, and enjoyment in perpetuity. The Wreck of the Rhone featured in the 1977 movie The Deep is now a popular dive site, and also the surrounding area is a national park. Nevertheless, the salt ponds and Wreck of the Rhone notwithstanding, the primary focus must be on the people and their industriousness, hardy lifestyle, culture, history, and the legacy of the forgotten and neglected people. As such, the Salt Island people's history, heritage, culture, and legacy must be highlighted, protected, promoted, and preserved. The culture of Salt Island should be a project on the Department of Culture bucket list.

Adam Leonard aka 'Tardum', my paternal great grandfather and supposedly the son of an African slave from Ghana/West Africa, was the father of the 'Salt Island' nation. Tardum acquired the name Tardum due to his extremely dark complexion. The five major family branches, i.e., Abbott, Durante, Smith, Thomas, and Leonard, are closely related to Tardum. At its peak, some 100 people called Salt Island home sweet home; the majority of the people resided in the "Settlement," which is a small slit of land located between the main salt pond and Salt Island Bay, the principal seaport. However, currently, there are no permanent residents on Salt Island. Some contributing factors to the population decline include a) aging of the population, b) natural disasters, i.e., gales/hurricanes, c) lack of support services, d) lack of employment opportunities, e) quest for a higher quality of life, and standard of living, f) emigration to pursue employment opportunity and g) families relocating to Tortola to keep the family unit together/intact and to provide educational opportunities for their children.

Moreover, Herman Thomas, Norwell Durante, and Henry Leonard aka 'Chicken' were the last three holdouts and brave souls to reside on the island permanently. Leonard was the last brave soul to live alone on the island; he relocated to Tortola in 2008.

Living on Salt Island was a simple, basic, enduring yet idyllic life with limited opportunities to earn a living. Salt Islanders became a close family with little to no external assistance and banded together, sharing limited resources to survive. It was a village with each one helping each one. To eke out a living, the islanders/villagers a) fish, b) pick/harvest salt, c) burn coal, d) reared small livestock stock, and e) work ground (subsistence agriculture). Further, the per capita income of Salt Island was a meagre few hundred dollars a year, but as a community, they didn't have much but shared and made the best and most of what they had.

Moreover, Salt Island was a forgotten and neglected island. Its people were stigmatised and tagged with the non-endearing term "Key People" (sometimes worst). Some were ashamed of and hid their connection to the "Key" (now, it is becoming a badge of honour to be connected to the Key; I'm a proud and unapologetic 'Key Boi') and received little to no government assistance. Nonetheless, the people persevered and survived.

From a high of 100 people, the population declined to zero. As such, descendants should lead the effort to repopulate Salt Island. Further, to facilitate the repopulation effort, the government must be an active and key player. It must invest in a) transportation, b) roads, c) electricity, d) water, e) wastewater/sewage, f) telecommunications, g) dock(s), and recreation and community services facilities. Moreover, Salt Island is currently in the Fourth (4th) electoral District (probably needs to be aligned with the 8th District). Nonetheless, since there are no permanent voters on Salt Island, its issues/needs are not a top priority for elected officials, i.e., the district representative or at large representatives. However, the Salt Island diaspora resides in all nine (9) electoral districts and they must exert their influence in dialogue with elected officials, potential candidates, and, more importantly, at the polls.

Salt Island is currently uninhabited. Consequently, with it being uninhabited, there is a serious potential risk in the upcoming years. For example, a new governing entity(s) can repurpose its use, and descendants could be out in the cold wondering what happened. As such, it is vital and critical that a strong, fair, equitable, structured, workable, and reasonable plan of action be developed and executed that puts Salt Island descendants on equal footing with its other sister communities around the territory regarding land distribution. Salt Island land had little to no value; now, it is highly valuable and prime real estate, and there is considerable interest in and demand for a piece of the Rock.

However, Salt Island is a tiny island of 0.3 square miles (190 ac), 12 acres occupied by two salt ponds, and 2 acres dedicated to burial sites. The remainder is available for decided use, including distribution among descendants. Nonetheless, the bottom line is that every man jack may not get a piece of the Rock individually. Consequently, any devised plan must provide the most benefits to the most people. Descendants must be involved in the decision-making.

Moreover, Frederick Douglass: If there is no struggle, there is no progress. And if Salt Island descendants want to progress in resolving the land distribution issue, they must unite and collectively fight for it. It will require descendants' intense and persistent effort to activate, agitate, and advocate to make things happen. They must follow up and follow through on pending action(s). Further, they must work collectively, collaboratively, and cooperatively with the government to devise a balanced, sensible, fair, and reasonable plan of action with milestones. Everyone will not get all the desired outcomes; it will take fairmindedness and compromise to make things happen. Family working together with a common goal can move mountains.

PS: Wallace Leonard aka 'Bonds' thoughtful insights on the future of Salt Island motivated my penning these few rambling lines.