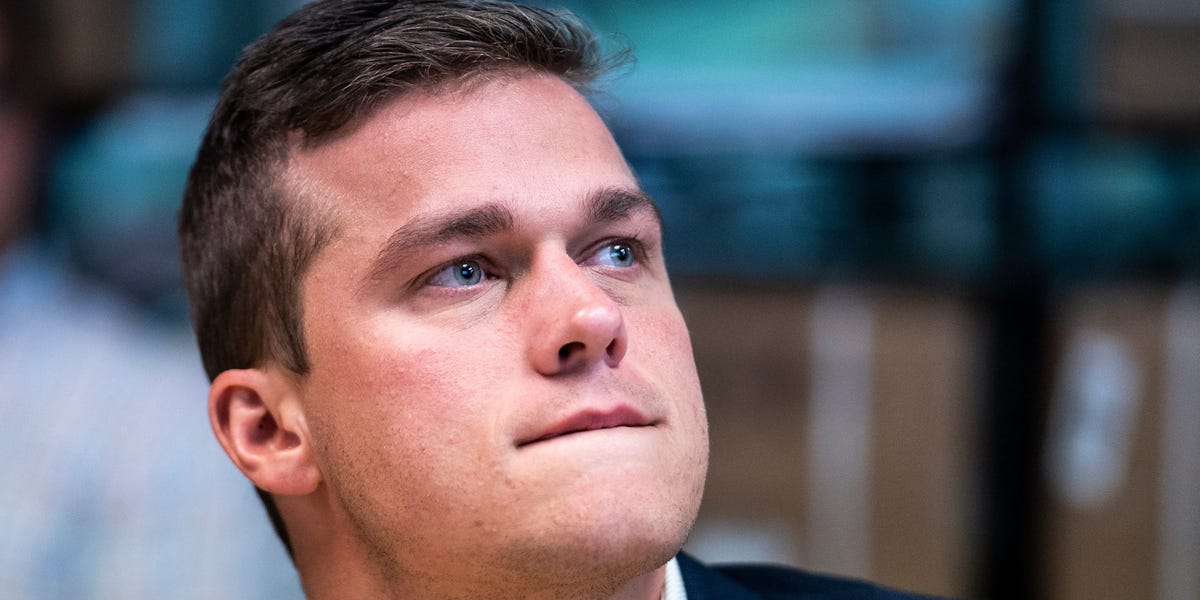 Scandal-plagued Republican Rep. Madison Cawthorn just violated a federal conflict-of-interest law for the third time this year, according to an Insider review of congressional financial disclosures.
Cawthorn's latest personal financial disclosure, mandated by federal law, shows he sold an amount of "Let's Go Brandon" coin valued between $15,001 and $50,000 in January. He waited until earlier this month to report the trade, in violation of the federal Stop Trading on Congressional Knowledge Act of 2012.

The law, in part, requires members of Congress to report financial trades made within 45 days, or risk facing a penalty — the typical fine is just $200.

Aides for Cawthorn did not respond to Insider's request for comment.

Cawthorn first violated the STOCK Act in May, as he was months late disclosing hundreds of thousands of dollars worth of purchases and sales of cryptocurrency ethereum and Let's Go Brandon coin.

Then, in June, he was again late in disclosing two-dozen more cryptocurrency trades.

Regarding his investments in Let's Go Brandon coin, a name designed to insult President Joe Biden, the House Ethics Committee fined Cawthorn more than $15,000 in December after investigating his ties to the cryptocurrency. The committee found that Cawthorn purchased the Let's Go Brandon coin on terms more favorable than available to the general public, a violation of House rules by accepting a gift.

The value of all Let's Go Brandon coins in circulation was more than $570 million at the end of December 2021, but its market cap dropped to $0 — literally worthless — by the end of January 2022.

Cawthorn is among 77 members of the 117th Congress who violated the disclosure requirements of the STOCK Act, as documented by Insider as part of its "Conflicted Congress" investigative project. "Conflicted Congress" revealed numerous conflicts of interest in Congress, including by top congressional aides — Insider found that 182 senior-level congressional staffers had also violated the STOCK Act.

Cawthorn will not be returning for the 118th Congress — earlier this year, he lost in the Republican primary to Rep.-elect Chuck Edwards amid a series of scandals and opposition from his own party.

"I just told him he's lost my trust, he's gonna have to earn it back," McCarthy told reporters, according to Axios. "And I laid out to him everything that I find is unbecoming."

In April 2022, police cited Cawthorn for carrying a loaded handgun inside of the Charlotte Douglas International Airport — it was the second time he was caught trying to bring a firearm onto a plane during his time in office.
#Joe Biden