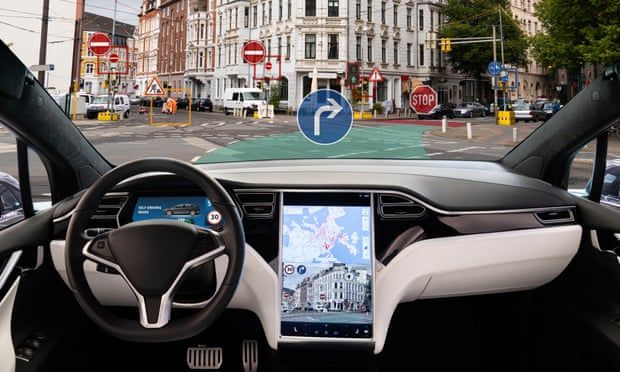 Proposed interim measures include making insurance companies liable for accidents in self-driving vehicles
Users of self-driving cars will be able to watch films on the motorway under planned changes to the Highway Code, although it will remain illegal to use mobile phones.

The update, proposed by the Department for Transport (DfT), will allow those in the driver’s seat to use a car’s built-in screens to watch movies and TV programmes.

The new rules also state that insurance companies will be financially liable, rather than individual motorists, for accidents in self-driving cars.

However, those behind the wheel must be ready to resume control of the vehicle when they are prompted – such as when they approach motorway exits. These measures were described as an interim measure by the government to support the early deployment of self-driving vehicles.

Although there are no vehicles currently approved for self-driving on roads in the UK, the first could be approved later this year. The introduction of the technology is likely to begin with vehicles travelling at slow speeds on motorways, such as in congested traffic.

In April 2021, the DfT said it would allow hands-free driving in vehicles with lane-keeping technology on congested motorways. Existing technology, including cruise control and automatic stop/start, is classified as being “assistive”, meaning that users must remain fully in control.

Trudy Harrison, a transport minister, said the updates were the result of a public consultation, and would be a “major milestone in our safe introduction of self-driving vehicles”, which would “revolutionise the way we travel”.

She added: “This exciting technology is developing at pace right here in Great Britain and we’re ensuring we have strong foundations in place for drivers when it takes to our roads.

“In doing so, we can help improve travel for all while boosting economic growth across the nation and securing Britain’s place as a global science superpower.”

Steve Gooding, the director of the pro-motoring thinktank RAC Foundation, said: “The Highway Code has been updated a number of times in recent years to reflect the rapidly changing transport world we live in, and these latest additions will help us all understand what we must and must not do as we move forward to an environment where cars drive themselves.

“The final part of the jigsaw is to ensure these amendments are widely communicated to, ​and understood by, vehicle owners. Vehicle manufacturers and sellers will have a vital role to play in ensuring their customers fully appreciate the capabilities of the cars they buy and the rules that govern them.”

Earlier this year, the Law Commission of England and Wales and the Scots Law commission published a joint report, which recommended the introduction of a new Automated Vehicles Act.

The proposals for the act would be that when a car is authorised to be “self-driving”, and those features are in use, the user would no longer be responsible for how the car drives, but rather the company which obtained the authorisation would. Therefore, the user would be unable to be prosecuted for offences that come directly from the driving, and so would be immune to offences that include dangerous driving.

The UK, Scottish and Welsh governments are deciding whether to accept the report’s recommendations and bring them into legislation, with the governments expecting to have a full regulatory framework in place to support the widespread deployment of driverless vehicle technology by 2025.