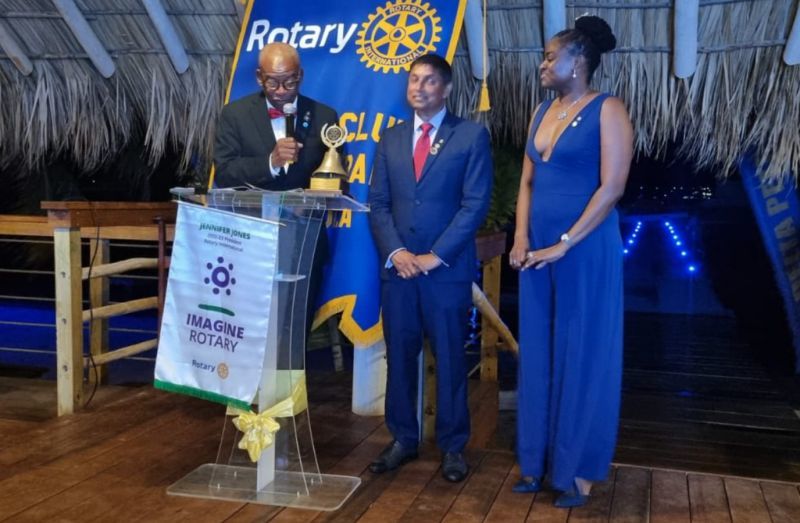 The vibrant Rotary Club of Central Tortola is taking the lead among the four Rotary Clubs in the territory to push food security for the people of the Virgin Islands (VI). This was revealed by the newly installed president of the Club, Mr Shan Mohamed.

Mr Mohamed was pinned President on Saturday, July 23, 2022, at an installation dinner held at Loose Mongoose on Trellis Bay, Beef Island when the baton was passed on from their first president, Ms Nelcia St Jean.

Mr Mohamed, who has served as the President of the Rotary Club of Road Town, outlined that the Club has in train a number of new and return projects and among them is a strong push to encourage kitchen gardening.

“I recall many, many years ago I was at the airport in Antigua and I met the then Chief Minister and Past President Hon Ralph T. O’Neal [OBE] and, among the things we chatted about, he said to me that in the past everybody had a kitchen garden in the British Virgin Islands and he didn’t understand why that practice seems to be dying. I think it is only fitting, considering all the things that are happening around the world, that we can lead this charge.”

The new President, who also touts himself as a farmer, said he is looking forward to partnering with the Department of Agriculture and providing seeds and seedlings for families.

The strategy, according to Mr Mohamed, “Is to encourage persons to plant small areas, not trying to do this on a too large scale because those of you who would recall during the COVID-19 lockdown, everybody became farmers [and] as I expected, that practice died not too long after.”

Club gets thumbs up from Gov Rankin

Governor John J, Rankin, CMG, in delivering the feature address, complimented the young club on what he described as an excellent first year.

“A club which I know prides itself for being an action club, getting out and about helping the community in so many practical ways.”

Governor Rankin underscored the club's work on impacting the environment, such as mangrove restorations, beach clean-ups, and palm tree planting.

The Governor also extended personal congratulations to Mr Mohamed on his appointment as President and wished him a successful and rewarding year at the helm.