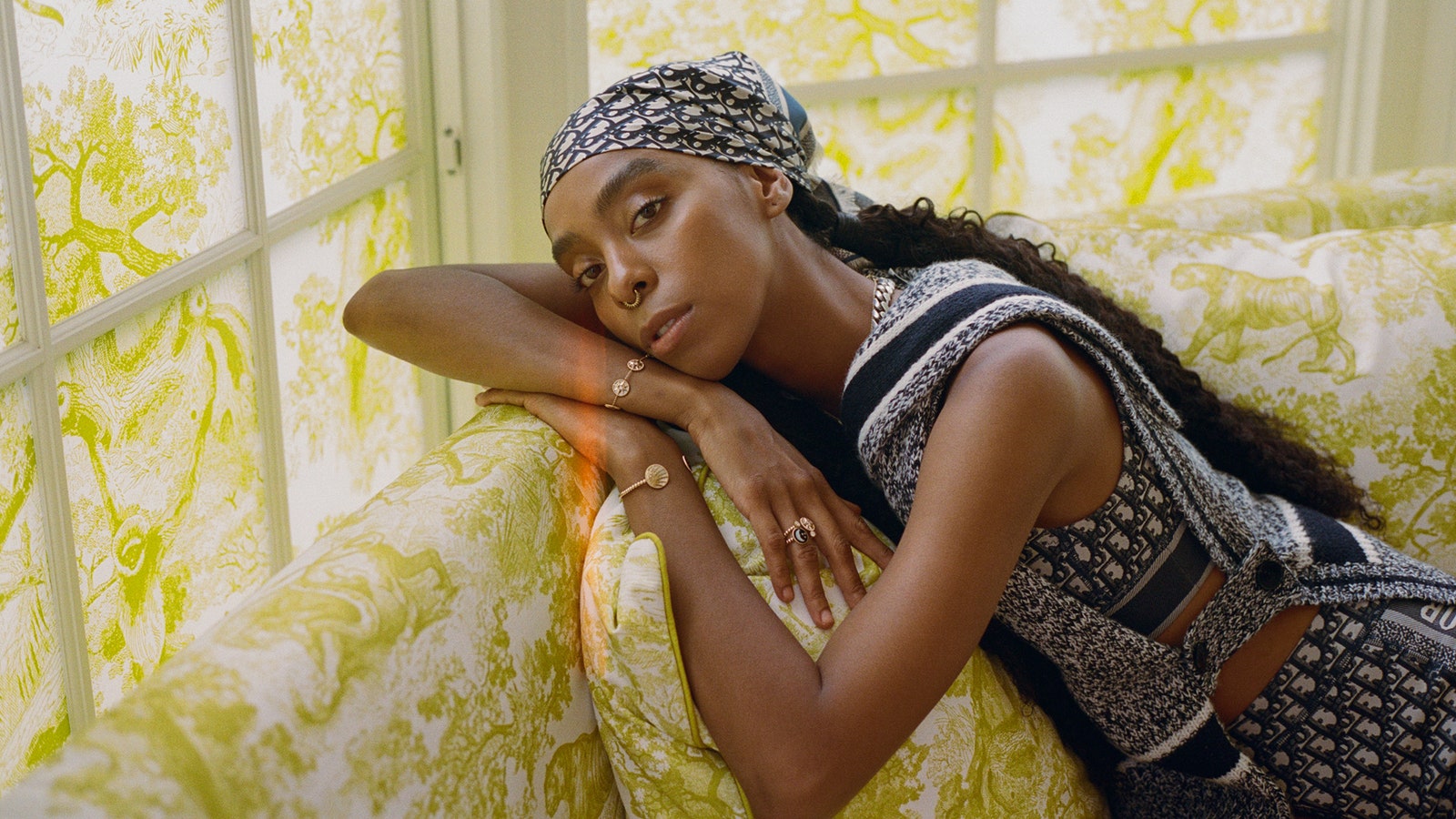 Skater, Stuntwoman, and Dior Muse Briana King Should Be Your New Obsession

The stylish athlete is challenging stereotypes within her sport.

Briana King isn’t here for stereotypes. The 27-year-old skateboarder from Los Angeles is a one-of-a-kind talent. King is a multifaceted modern athlete, as at ease when she’s cruising across the screen in the film Skate Kitchen, teaching girls how to olie, or modeling for brands like Dior. Perhaps that’s why she finds the old assumptions about her sport so comical. “[People think] that we’re all hooligans,” King says. “I’ll never forget the day somebody said, ‘you’re so well behaved for a skater’ I just had to laugh at that comment.”

Growing up in California, the birthplace of skate culture, King was surrounded by fellow skaters but didn’t begin learning until she was 12. “All my neighbors skated, and I would watch them every day from my kitchen window wishing I could join them,” she says. Once she got her first taste of skateboarding, King developed a passion for the sport and its unmistakable aesthetic. “What first appealed to me was the style," says King. “My mom is a stylist and I've always been into clothes. The skater boys had brand new clothes all the time and even their ripped up clothes looked cool so that was the first thing that attracted me.”

In 2018 King began to post skate tutorials on social media and her website. “I always ended up deleting all my videos because at one point i only wanted the best ones to be out there,” she says. “Now I keep everything up and show [my] progress so others can feel more comfortable sharing online.” King's clips were popular but there’s only so much you can learn from watching, only practice can take a skater to the next level but women often have it harder. King recalls experiencing sexism while she was honing her skills and the impact it had on her. “When I finally got my skateboard as a kid I thought ‘this is fun’ I want to skate with the boys, but they expected so much of me all the time and that was discouraging,” she says. “I had grown men being mean to me, [it's] not just boys. I ended up stopping until I found my group of girls.”

Those experiences led King to found Display Only in 2018, The project that facilitates local skate meetups for girls and LGBTQIA individuals to promote real-world interactions. A safe space where newcomers can learn, practice, or simply hang out, it encourages participation, not perfection. “Teaching is my biggest passion,” says King. “I’ve [been able to] plan a stop in every city where I’ve wanted to teach and have some of my favorite brands backing it. To this day, I still can’t believe that I get to do it.”

King’s immersion in the fashion world was also a surprise. Despite being approached by modeling agents multiple times, she was reluctant to enter the industry. More than that, her mother didn’t want her to fall prey to the dangers many new models face. “Growing up in the city, my sister and I were always scouted but my mom was against it,” King explains. “She made me terrified to be a model, but I ended up doing it anyway." Contacted by scouts on her MySpace back in 2010 King moved to Australia where she found success in front of the camera. Eventually even Mom came around to the idea. “Now she's my biggest fan,” says King. Though she enjoys posing the most valuable thing modeling has given King is a support system. “When I sit down and think about my modeling career, the first thoughts that pop up are about the amazing people I have met on set and the relationships I’ve kept," she says.

One of those relationships has been with Dior. The iconic French house has become a part of King's fashion repertoire adding a touch of savoir-faire to her sporty personal style. “Majority of my clothes are from my skateboard sponsors, so my style is always on skater mode with a bit of glitzy,” says King. “I always dress up my skate fits with jewelry, and I have a bad habit of always skating in my designer pants, that I should probably take better care of, but they make me feel so good when I skate that I forget how much they cost till they’re covered in too many holes.”

This weekend King dropped in to Dior’s Montecito pop-up at Rosewood Miramar Beach to immerse herself in their latest wares and have a little fun trying on some of her favorite pieces. “I’m an accessories girl,” she says. “They’re the easiest to keep [looking] nice while skateboarding.” A fan of statement sunglasses, layered scarves, and Dior’s D-connect sandals, she’s been busy plotting out her seasonal wardrobe. “I’ve already daydreamed how I’d wear these pieces on the beach,” says King. “I could wear the visors and fringed scarf every day this summer, and I need that check-covered anorak to throw on when the sun sets.”

Currently working with Pullias Center for Higher Education at USC’s Rossier School of Education and USC’s Annenberg School for Communication and Journalism as they conduct a landmark study of skateboarding’s demographics, King is excited for the opportunity to bring the sport she loves to even more people. “I will forever be working on creating a better environment for our community with a focus on the girl, gays, and theys,” says King. 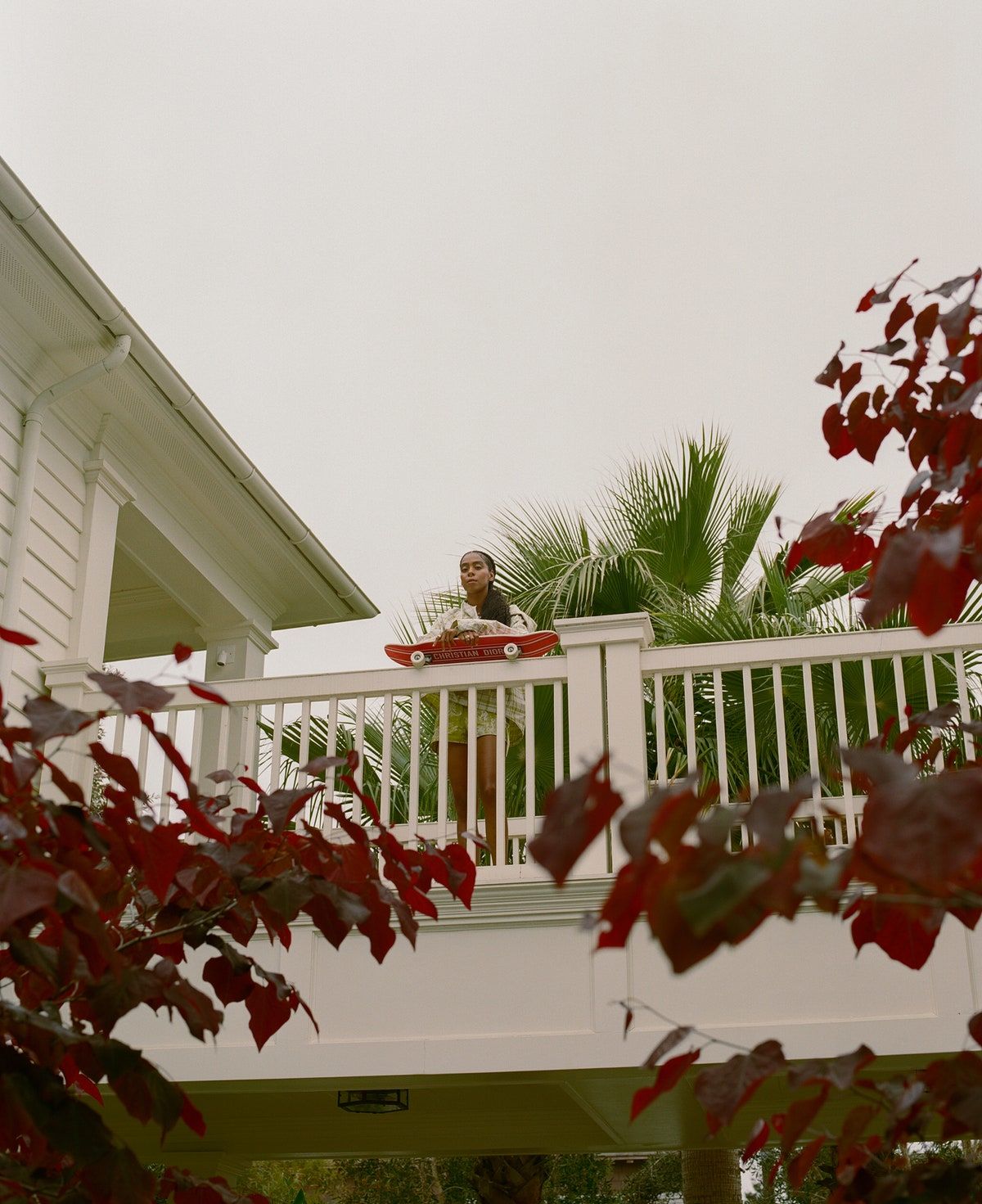 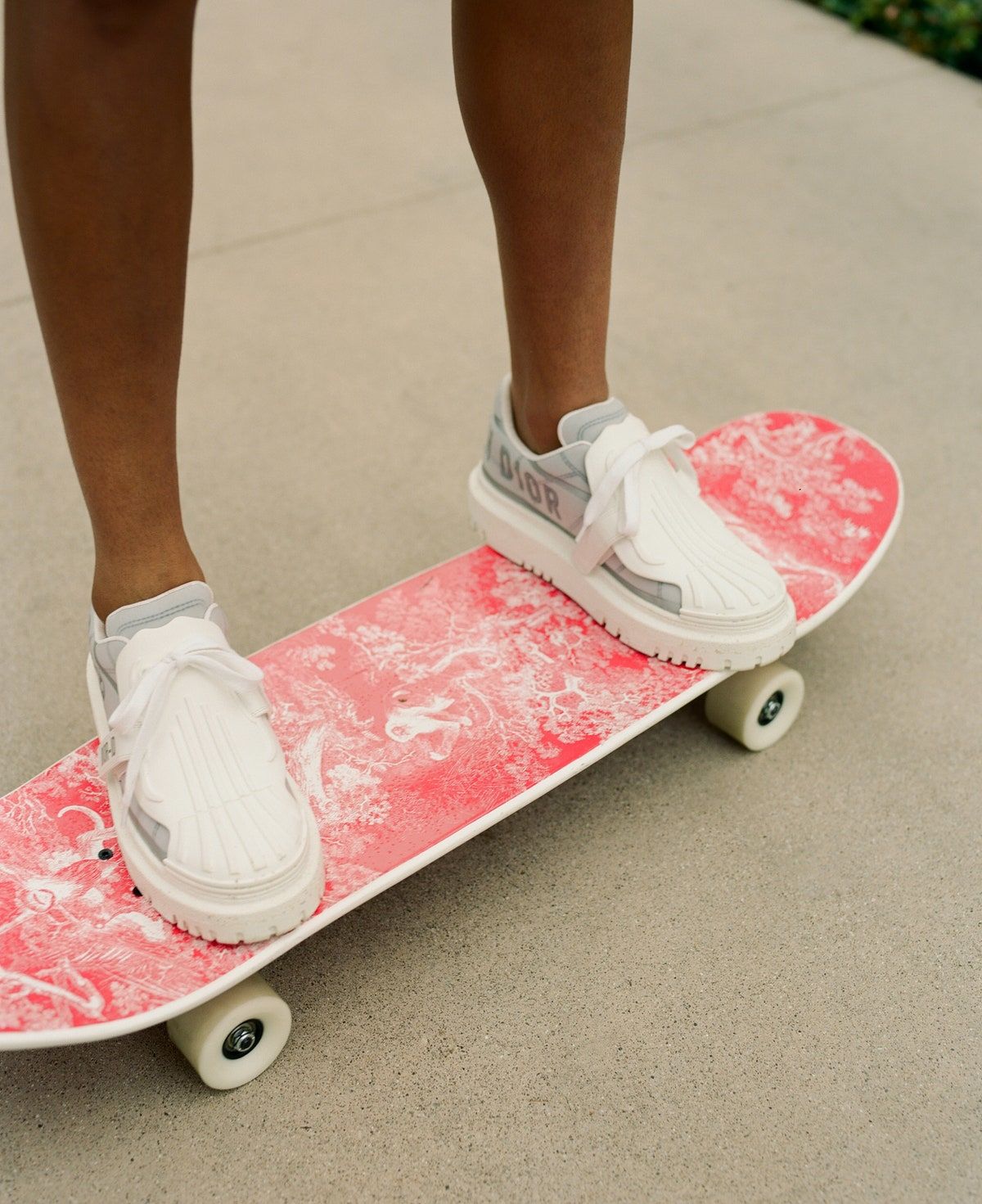 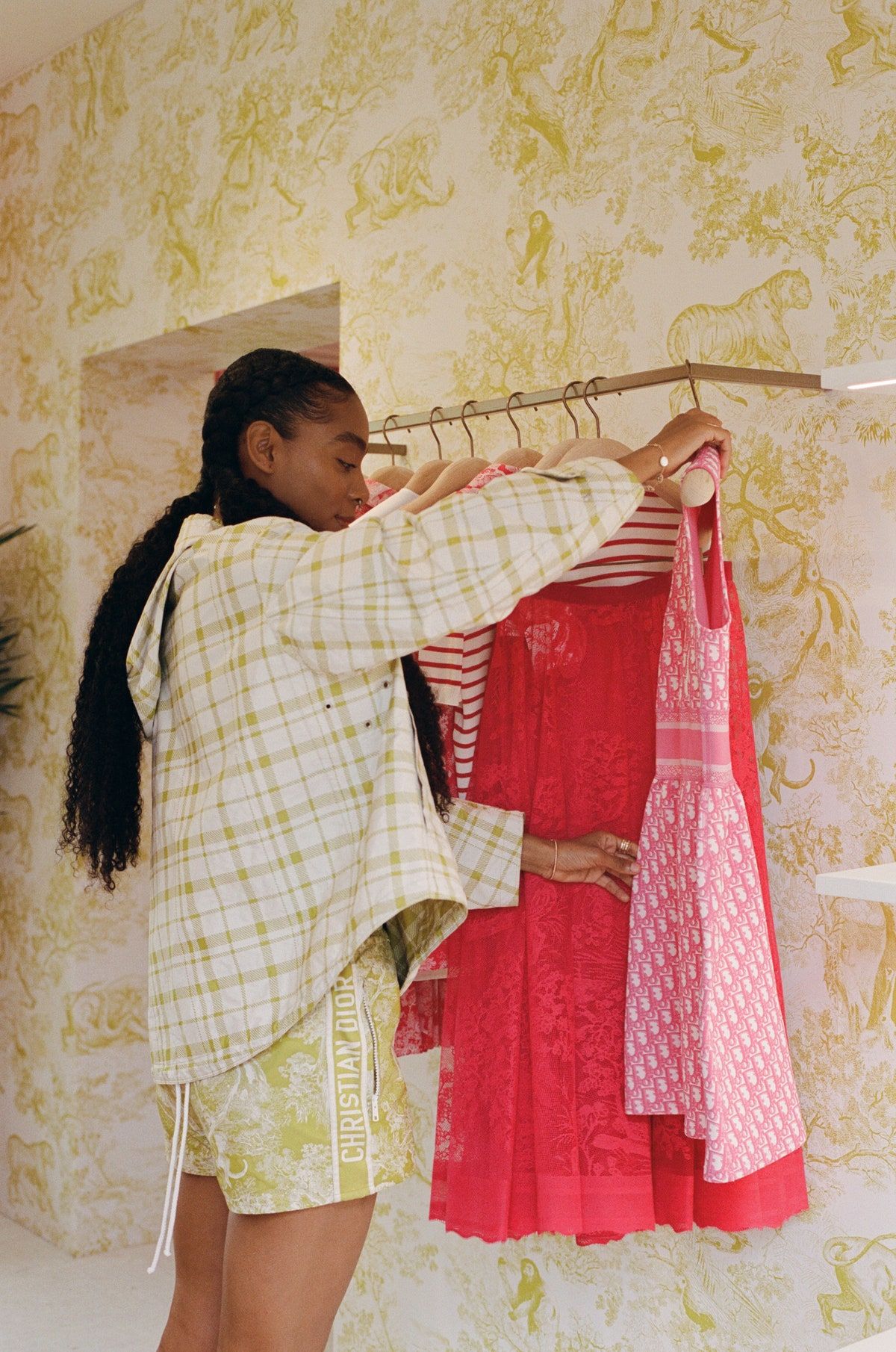 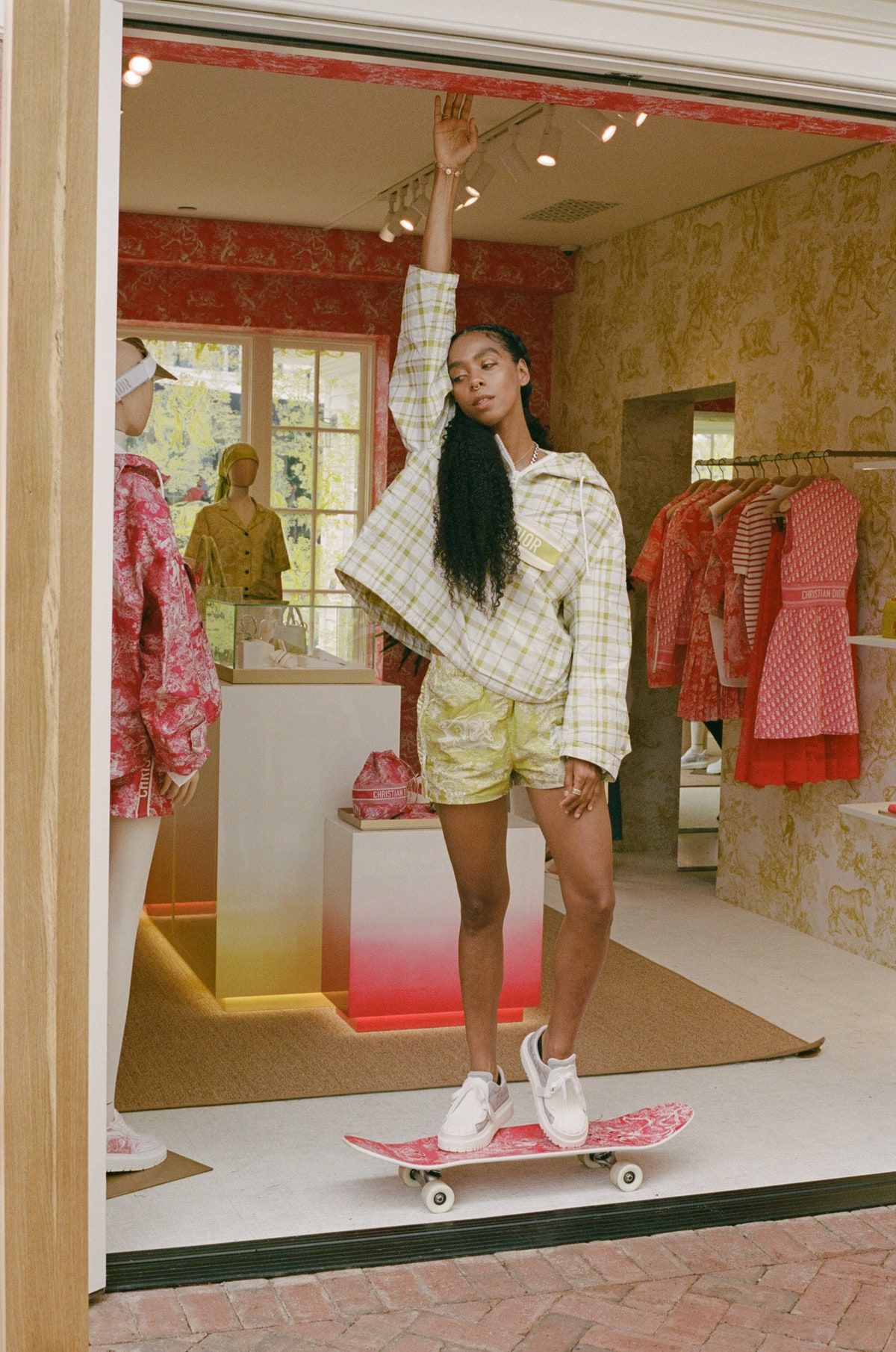 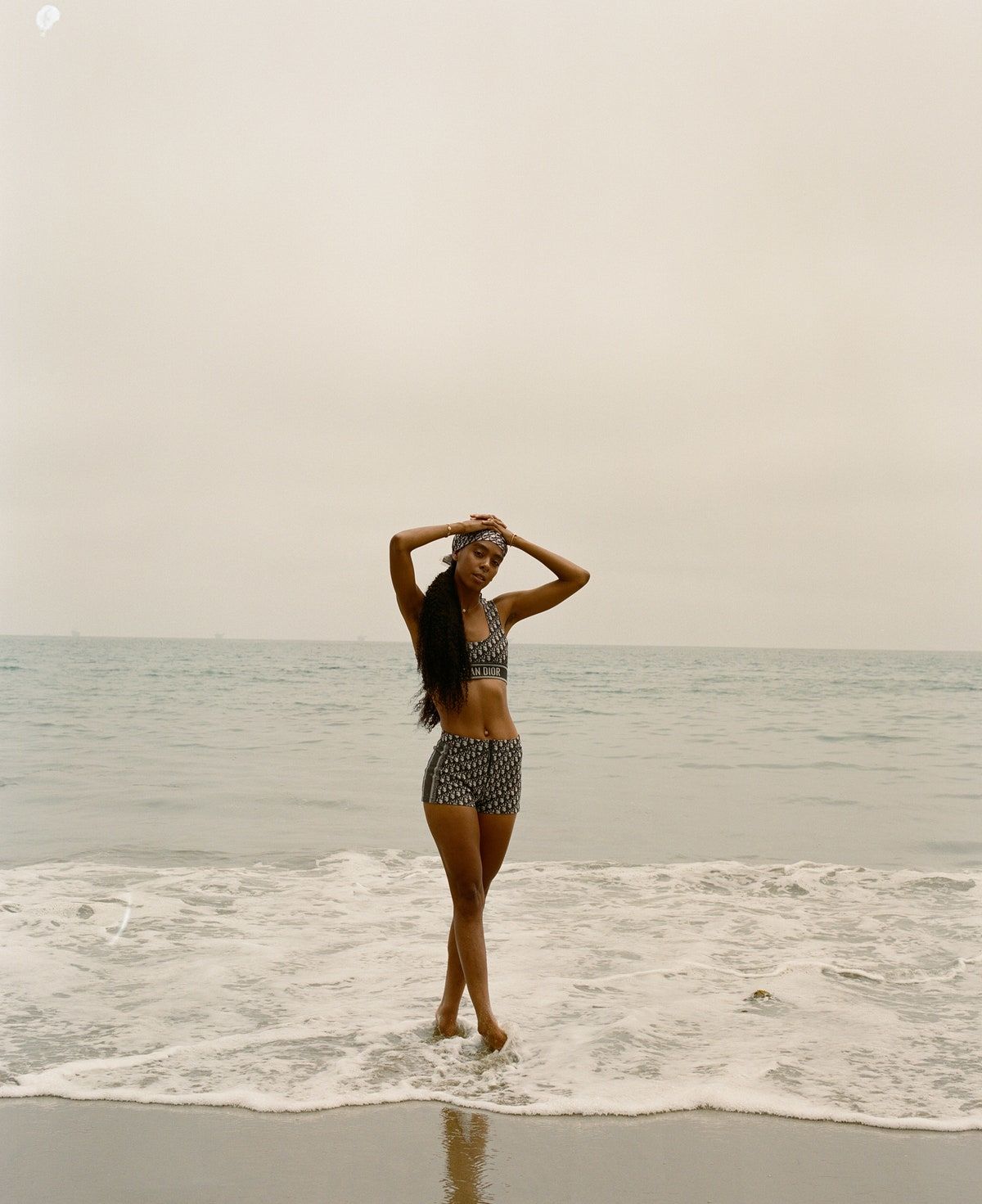 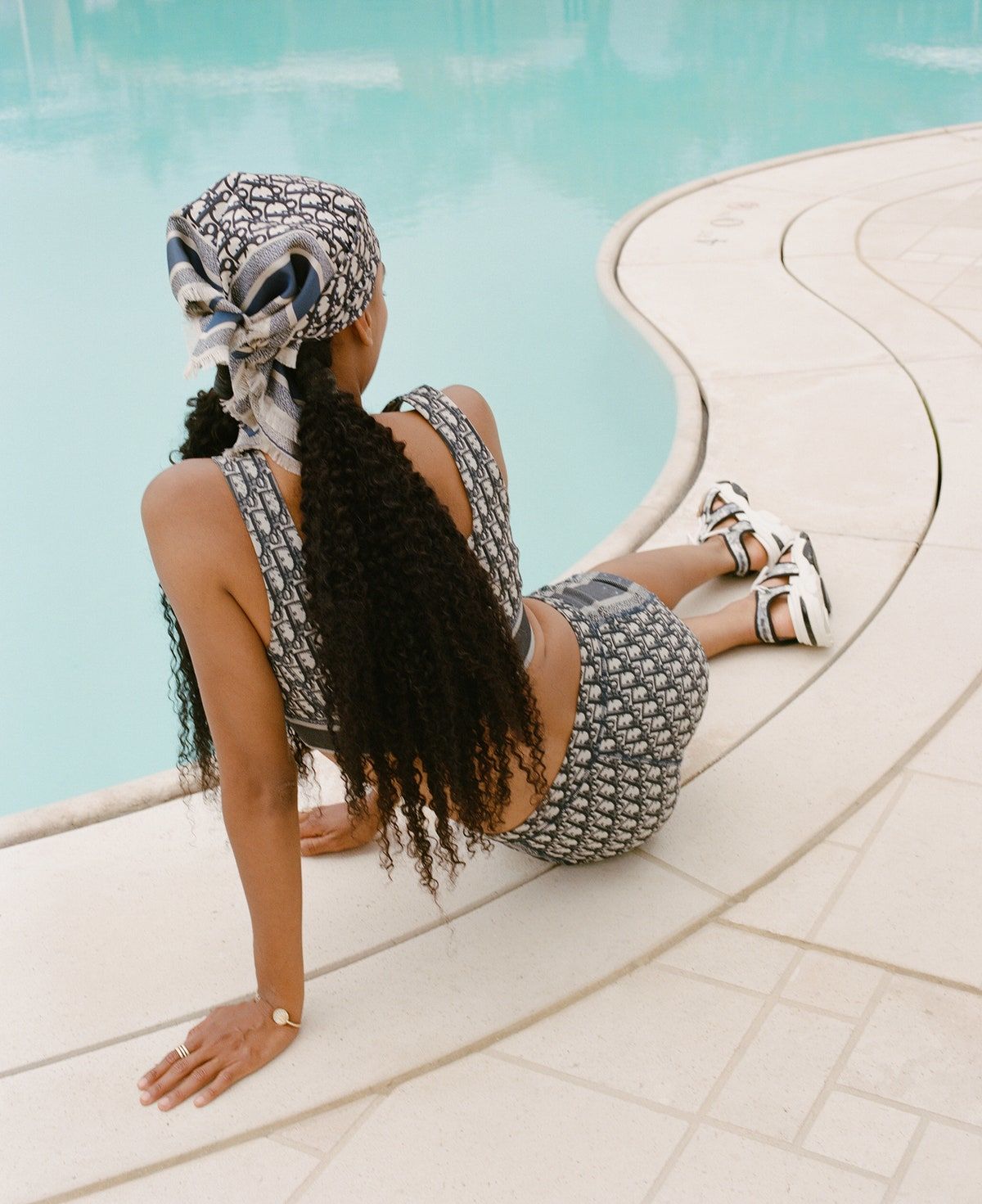 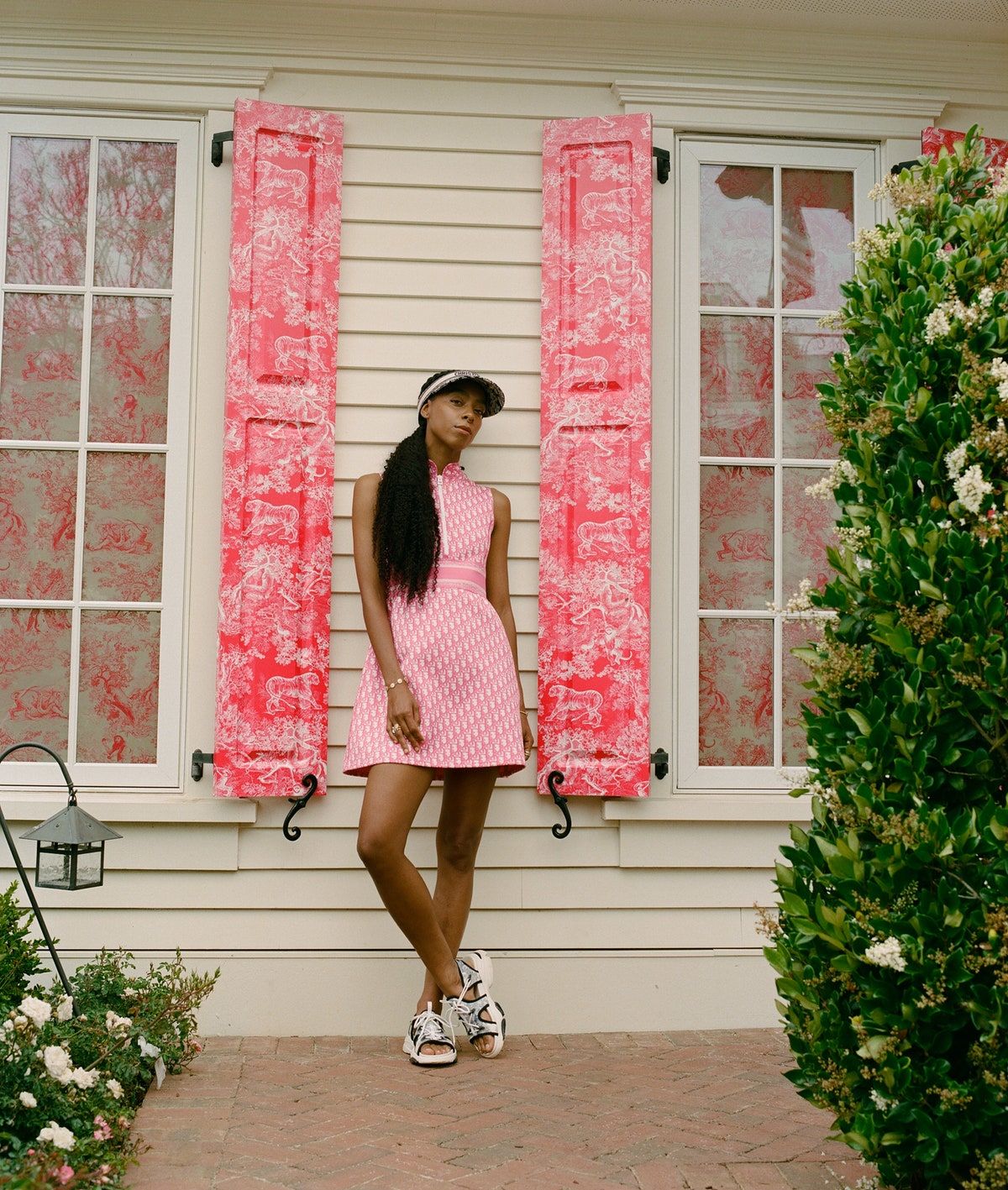 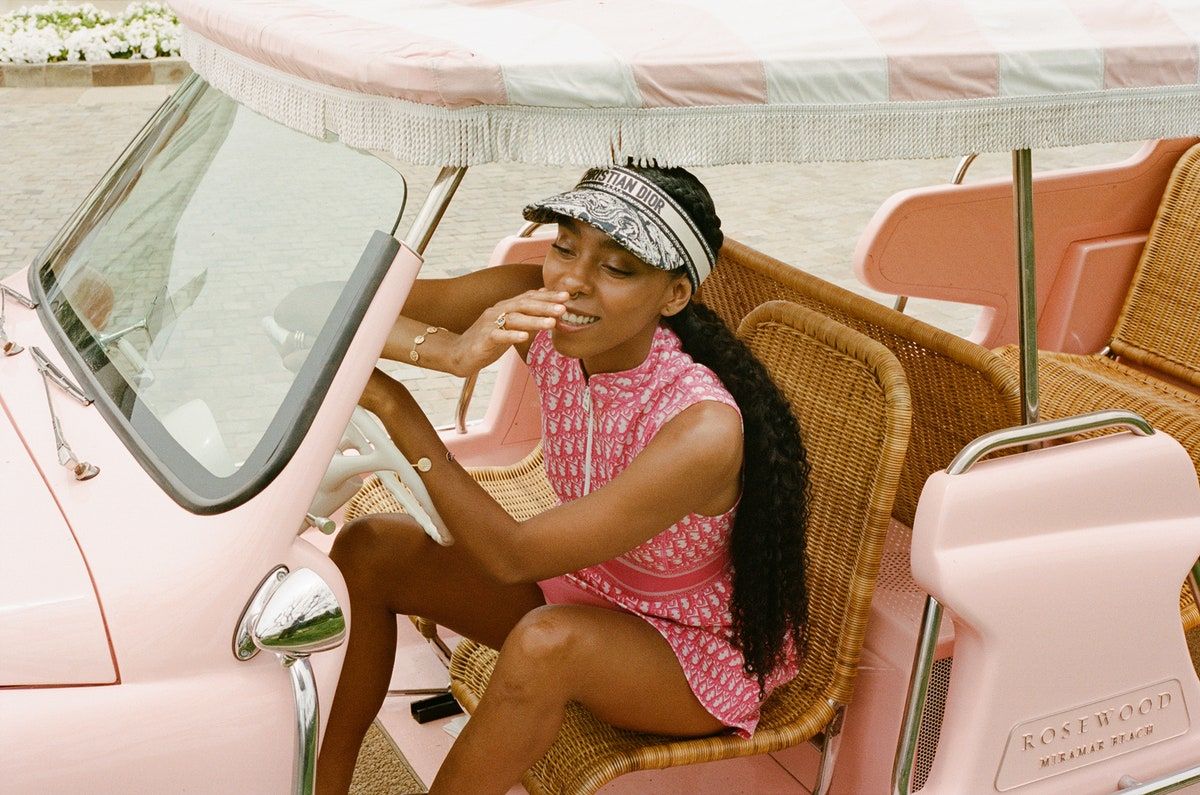 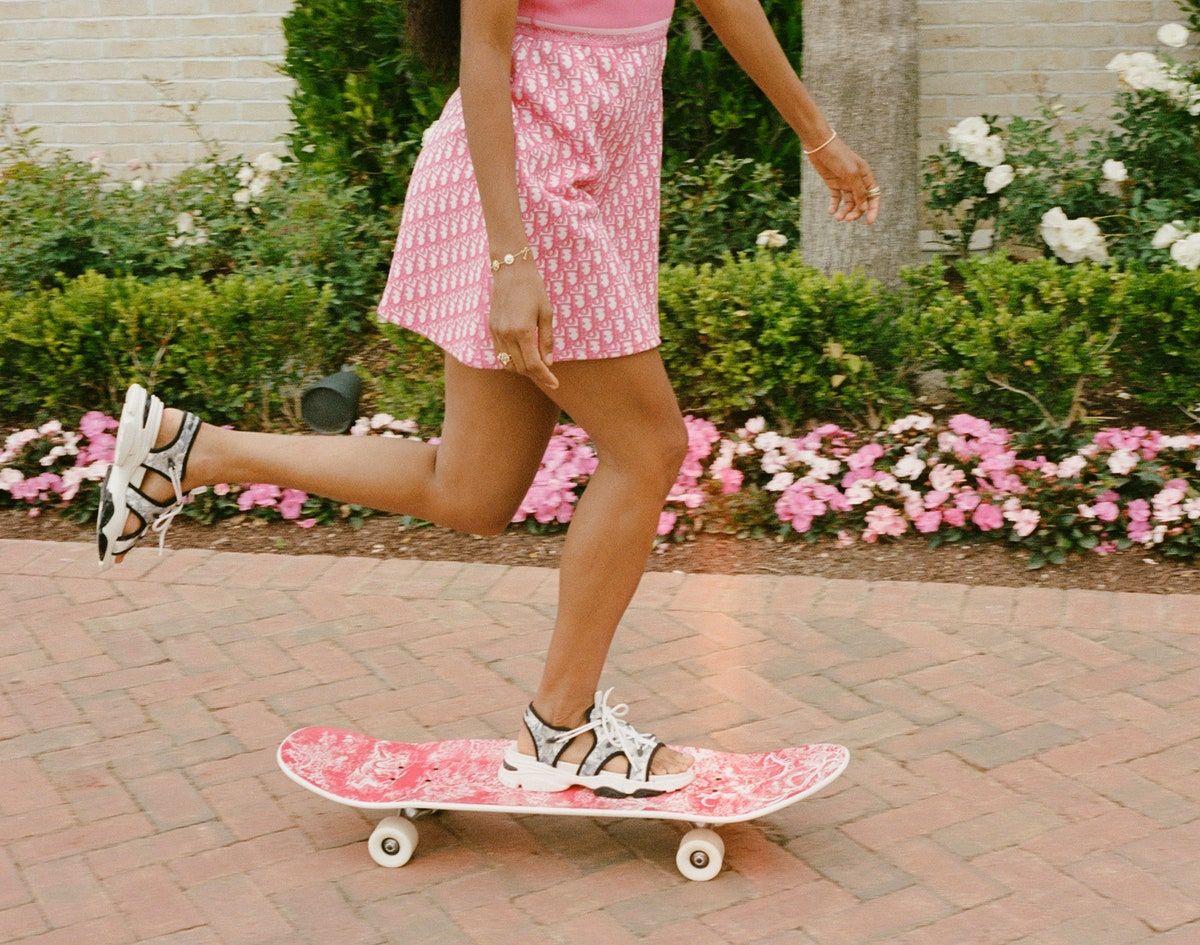