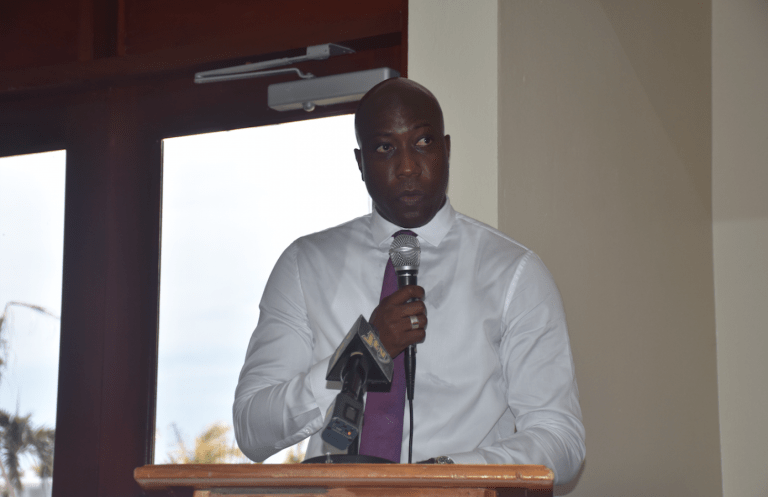 Statement by Myron Walwyn on being charged with Breach of Trust

Earlier today I was arrested and charged for breach of trust by a public official in relation to the Elmore Stoutt High School Wall Project. While I have privately and publicly professed my commitment to good governance, I have also backed up this fact with my willingness to cooperate with an investigation that has spanned five years and counting.
According to former Commissioner of Police Michael Matthews, the investigation was completed in early 2020 and its findings were sent to the DPP’s Office, to decide whether the evidence warranted a pursuance of prosecution. Though this matter was publicly discussed by the Commissioner on talk shows and various medias during its process, to date, no update has been given to the public about their findings following its conclusion.

The wall around the Elmore Stoutt High School was built at that time due to repeated and documented concerns of the school Principal and senior staff about the safety and security of students and teachers. The evidence showed that the previous wire mesh fence was being breached almost on a daily basis which allowed non-students, drugs and offensive weapons to find their way on the school compound. Given the grave danger posed, the Ministry of Education acted upon the request and started the process.

The Ministry recommended that the project be done by Petty Contracts and a draft Cabinet paper was sent to the Ministry of Finance to that effect. The final Cabinet paper was approved by the Ministry of Finance and the paper was brought to Cabinet by the Minister for Finance. The Cabinet decided to have the project done by petty contracts, different contractors (works orders) and suppliers rather than just petty contracts as originally sought by the Ministry of Education. It is important to understand that Cabinet is comprised of not only Ministers but by an Attorney General and the Governor who though not voting members, are expected to raise any concerns about process. No objection whatsoever was raised by either at the time. Consequently, the Ministry of Education was bound by this Cabinet decision and acted accordingly.

As I have indicated in previous comments on the subject, I will never say that there were no procedural issues with this project. I also do not think that one could find any previously done government project that was faultlessly managed. As such, we all agree that we must continue to work on improving the way we manage all government projects. However, I do not believe that any of those procedural issues warranted or met the criteria of Breach of Trust to justify such a charge for anyone who was involved in the management of the project during its normal course.

If the intentions are truly to help the BVI to be better able to manage its affairs, I am not convinced that labelling its hardworking citizens as corrupt without concrete evidence and damaging their reputations, livelihoods and sense of decency is a productive approach. I repudiate any such label being placed on me. This is a charge that I will vigorously defend as it does not enjoy the benefit of the facts. In my humble opinion it is manifestly unjust.

Even considering my scepticism regarding the application of the law in this matter; I do, however, have the utmost confidence in our judicial system, one that I have had the privilege to be associated with for the past 16 years as an attorney, to render a fair and just decision on this matter. I am grateful for the opportunity to clear my name on this matter that has been nothing but a political football and quite frankly a witch hunt for the past seven years. I cannot recall any project, following this same procedure and even for much larger sums, having this level of attention and sustained focus.

Thankfully, some of you have had the opportunity to tune in to the live COI interviews of persons who were involved in the project at the Ministry of Education and could see for yourselves why I have raised these concerns regarding the credibility of the Audit Report and this charge. As a citizen and someone who was made a subject of the Commission of Inquiry, I am very concerned that the UK Parliament, prior to the release of the report, indemnified the Commissioner and his staff from civil suits in relation to what they have written in the report. This essential absolves them of them of any liability or responsibility for its contents however this very report is being used as the basis for investigating and bringing charges against local citizens. It cannot be right that a report which has the potential to ruin the careers, reputations, quality of life and living for individuals and cause a great deal of embarrassment to be allowed to hide behind an act of parliament and escape the scrutiny of the courts.

This action is not consistent with the tenants of accountability and transparency which the very report claims that it seeks to promote. In 2010, rather than staying on the sidelines and complaining about the state of affairs in our country, I made the decision to ostensibly leave my private businesses and offer myself as a candidate for election. You the people supported me and I had the privilege of serving you for almost eight years.

Though stepping away from my businesses was a sacrifice for both myself and my family, It was truly an honour to have served you. I worked extremely hard every day and I took my responsibilities seriously and though you may not have agreed with my every decision, there is no question that my heart was always in the right place. I worked tirelessly to improve the education system for our young people and hardworking educators as well as for the general advancement of our territory. The outcome of that work can easily be seen in the direction our territory had for youth development, education, sports and culture.

I represented you well both locally and internationally to the best of my ability, I made myself accessible to you and I did my utmost to assist anyone who sought my assistance irrespective of your political affiliation or other circumstances. Above all, I served you honestly. To now have this vexatious charge levied against me is extremely damming and troubling to me. Those of you who know me well would know and understand how hurt I am feeling at this point, especially after selflessly sacrificing so much for my country.

Notwithstanding, I will continue to make my voice heard on issues that affect my conscience in our community as I have done over the years including since demitting office. In fact, my concerns about the current direction that our country is taking have reignited the fire that made me offer myself to you in the 2011 election. I will, of course, keep you posted on this and any related development.
#Commission of Inquiry  #CoI