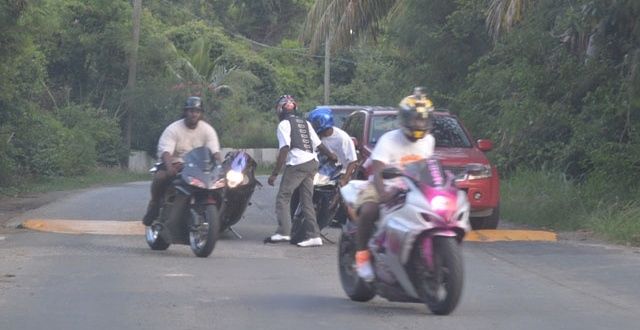 The government will soon be putting tough measures in place to regulate bikes.
Premier and Finance Minister Hon. Andrew Fahie who recently made this promise, also rejected claims that allowing bigger bikes into the Territory will worsen the situation.

He explained that government intends to have a system in place where each bike/scooter coming into the Territory must have a serial number and is registered with the Department of Motor Vehicles (DMV).

“Why weren’t bikes brought in with whatever serial numbers, and whatever they have, ensure a dealer brings them and once the dealer sells it we have to know who that bike was sold to so that it is accountable and registered in DMV,” he said.

Premier Fahie added, “and you could trace where these bikes are going no matter the size, no matter the CC. People say bringing in bigger CC they will go wild, no I don’t agree with that.”

He said the seller of the bike will be responsible to ensuring that there is a silencer on the bike.

“If we make sure that we properly regulate these bikes and make sure that we can account for when the bike that comes, who it is sold to, make sure whoever sells it knows that they have to have the silencer etc. on it and it has to be registered through DMV as part of the sale like a car," he explained.

The Premier said this should have been done years ago, “this would have been dealt with from long ago, and that is where we will have to go with it. But that takes a lot of gumption to function as a government to do it, and we are going to make sure that we do that and a lot more in this country.”

He said it is unfortunate that the issue was allowed to get out of control.

“And I asked that over and over, several years. Why did we allow bikes and we were not in government when it happened, to come in but we are here and I am not casting blame…I have been saying all the time if a car comes in, it has a VIN number and a serial number and with the serial number it is either a dealer or someone brings it in and it's registered.”

Last month, Hon. Kye Rymer, Minister for Transportation, Works and Utilities said that the government will be moving to amend the current Road Traffic Act to clamp down on loud exhaust mufflers and loud music.

“…The nuisances of loudness of the scooters, vehicles with the music, the exhaust--we are putting those things in the amendments where we will have increased fines. We will also be looking to equip the police officers with testers so they can test the decibels that would be now mandated by law and fines would be attached to that,” he said.

The Fifth District Representative said that residents have been asking what the government is doing about the noise nuisance of both the exhaust mufflers on scooters and loud music emanating from vehicles.

He said that public discussions will take place before the amendments are taken to the House of Assembly.
#Fahie