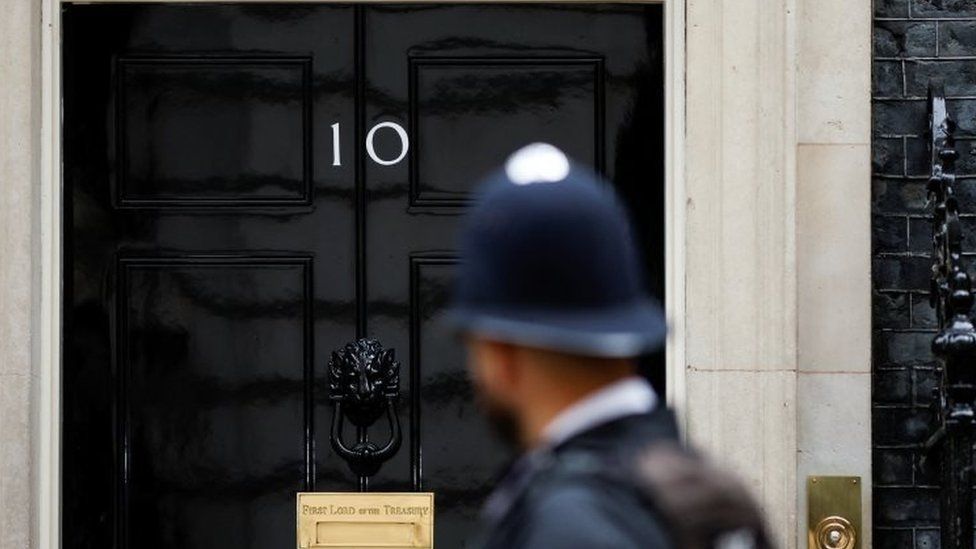 Sue Gray investigated 16 events among which the police found multiple breaches of Covid rules during the pandemic.

Her report criticises the culture and leadership in Downing Street.

It includes photos of gatherings and the names of some of those who attended.

Here we look at some of the key details in the 48-page report.

For each event, Ms Gray summarises the Covid regulations that applied at the time, and describes what happened and who attended. Here's what she wrote about some of the gatherings:

* People were there for separate meetings in the No 10 garden where alcohol was drunk; the prime minister brought cheese and wine from his flat for an outdoor meeting lasting between 40 minutes and an hour

* It was planned in advance by officials; an email sent to staff by the PM's principal private secretary Martin Reynolds read: "Please join us from 6pm and bring your own booze"

* Concerns were expressed about whether it was appropriate

19 June 2020: A gathering in the Cabinet Room for the PM's birthday

* A number of people gathered in the Cabinet Room for a pre-planned event with food, alcohol and soft drinks

* Cleo Watson, a No 10 special adviser, said she had been asked to organise it

* The prime minister and the chancellor had no advance knowledge of the event, which lasted about 30 minutes

13 November 2020: A gathering in Downing Street to mark the departure of a special adviser

* Staff gathered in the press office area of No 10 to mark the departure of Lee Cain, the PM's communications chief

* The prime minister attended on his way to his Downing Street flat, gave a speech and had a drink

* After 6pm, a meeting was held in the PM's flat to discuss the handling of Mr Cain's departure and that of former No 10 adviser Dominic Cummings; the PM joined it at about 8pm

16 April 2021: Two gatherings in Downing Street to mark the departures of No 10 officials

* Two separate leaving events took place in No 10, one for director of communications James Slack and one for another official

* Alcohol was consumed and speeches were made at both events, and the two groups eventually came together in the Downing Street garden

* Some people damaged a child's swing/slide in the garden

* Staff members stayed until the early hours, the last leaving at 4.20am

What photographs have been included?

In total, nine photographs from inside Downing Street appear in the report. They show:

* Mr Johnson, Mr Sunak and Cabinet Secretary Simon Case gathered in the Cabinet Room for a birthday party thrown in the PM's honour in June 2020 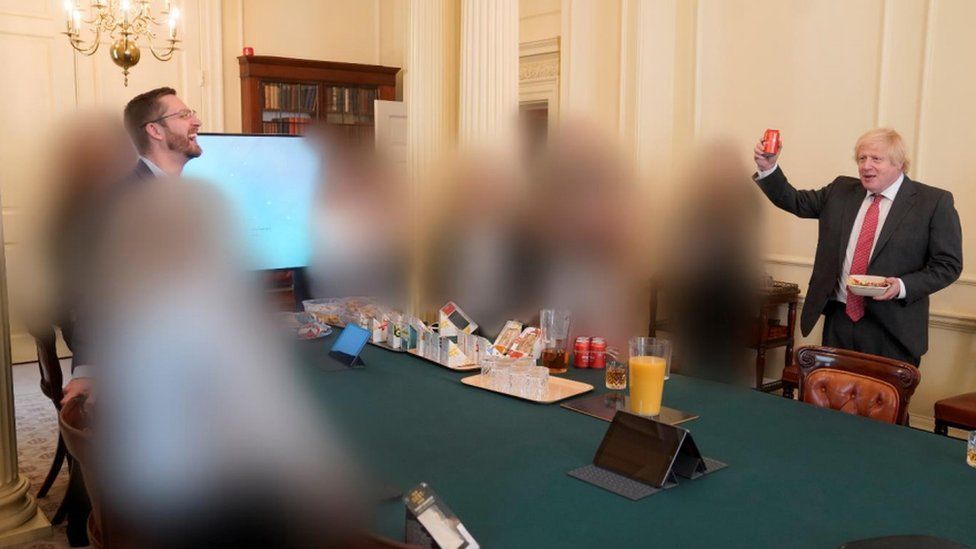 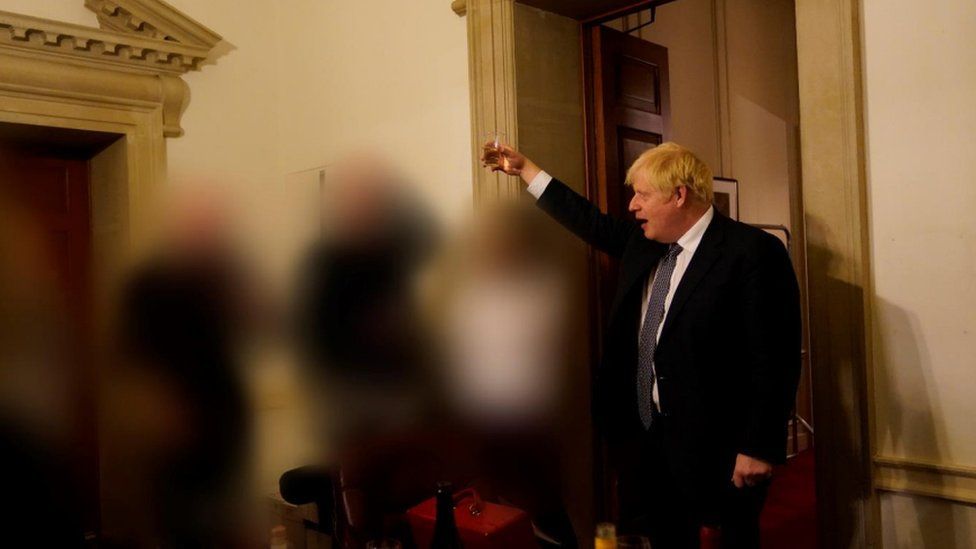 What are her criticisms and feedback?

Ms Gray's critique focuses on the context at the time of the parties, and her conclusions as to how they were allowed to happen at the heart of government during the pandemic.

* The pandemic "had a seismic impact on every aspect of life in the country", and restrictions were put in place to control the spread of the virus and keep the most vulnerable safe

* But those challenges "applied to key and frontline workers across the country who were working under equally, if not more, demanding conditions"

* The report highlights the personal sacrifices everyone made, including those not able to see "loved ones in their last moments or care for vulnerable family and friends"

* Regardless of "initial intent", many of the events investigated were not "in line with Covid guidance at the time"

* Some attitudes and behaviours were "inconsistent" with that guidance

* It is clear there were breaches of the Covid regulations and guidance, given the Met Police fined 83 people

* "The senior leadership at the centre, both political and official, must bear responsibility for this culture"; the public have "a right to expect the very highest standards of behaviour" in Downing Street and "clearly what happened fell well short of this"

* There were "multiple examples of a lack of respect and poor treatment of security and cleaning staff", which was "unacceptable"

* Ms Gray says disciplinary action "is for others to consider"; her report does not amount to a "disciplinary investigation"

* She says it is important to acknowledge that those in the most junior positions attended gatherings at which their seniors were present, or indeed organised them

Who has been named?

No one was identified in Ms Gray's initial report, which was released as the Met began investigating the events.

With the police force's investigation now concluded, Ms Gray has named some senior officials and ministers in her final report. They include:

* Helen MacNamara, a former ethics chief at the Cabinet Office

Which gatherings were investigated? 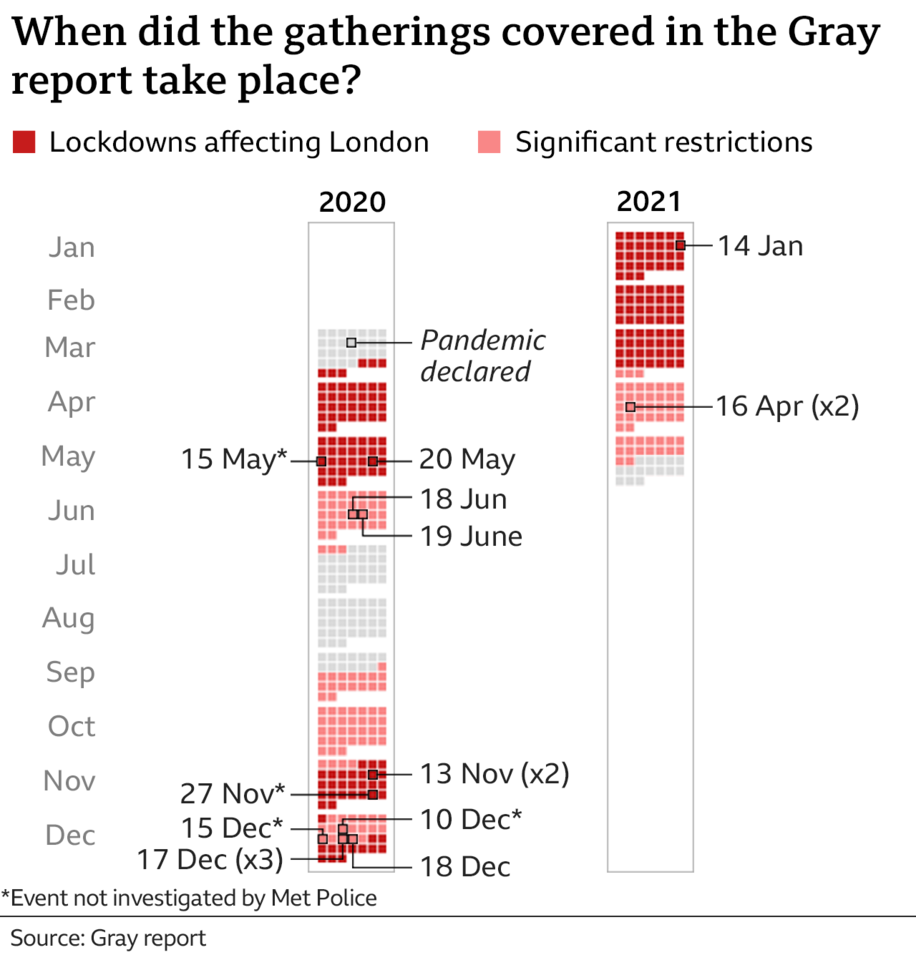 * The 16 events took place over a dozen dates between May 2020 and April 2021, when Covid restrictions were in force

* They were held in 10 Downing Street or the Cabinet Office, apart from one in the Department for Education

* Of these events, 12 were investigated by the Metropolitan Police, who issued 126 fines to 83 people, including the prime minister

* Mr Johnson, his wife Carrie Johnson and Chancellor Rishi Sunak were all fined for attending a birthday party for the PM in the Cabinet Room on 19 June 2020

* Other events investigated by Ms Gray included the infamous bring-your-own-booze party in the Downing Street garden, attended by the PM on 20 May 2020

* She also looked into a leaving do for Mr Johnson's communications chief Lee Cain and a gathering in the No 10 flat, both on 13 November 2020

* The last events on the list were two parties held by Downing Street staff at No 10, the night before Prince Philip's funeral on 16 April 2021