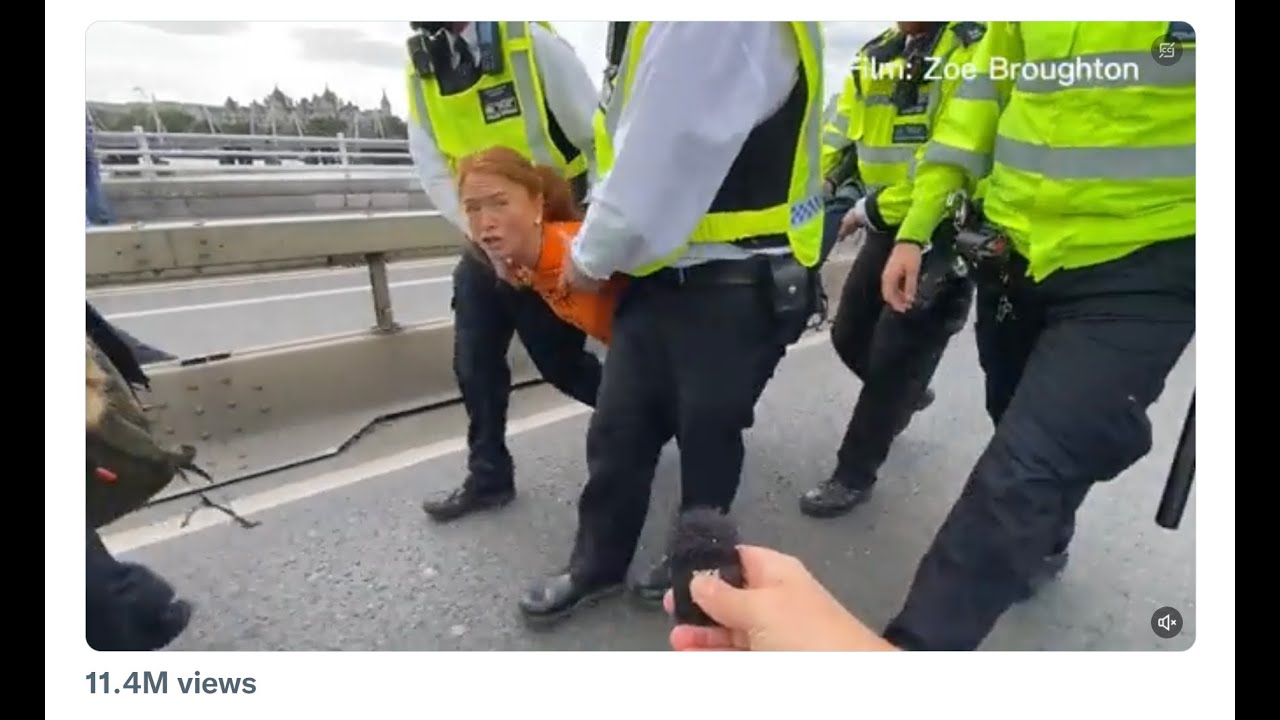 A climate change activist whose arrest has been viewed more than 11 million times said she was taking action for her six-year-old son. Her video demonstrate how to do a stunning media interview while being carried away by anti-democracy police.
Lora Johnson, 38, who lives in Southwold, Suffolk, was filmed being carried away by police from Waterloo Bridge in London on Sunday.

"I was there as a mother trying to stand up for the future for my child," Ms Johnson told the BBC.

The government said it was fully committed to reaching net zero by 2050.

Ms Johnson was protesting against the government's policy to award new oil and gas extraction licences.

"I hope it will show people that the only way we can effect change is by standing together," she said.

"The main objective of our protests is to draw media attention. And to stop a new oil licensing."

She said protesters were not asking people to give up their cars, but for the government to make a quicker transition to renewables.

The UK has opened a new licensing round for companies to explore for oil and gas in the North Sea.

Nearly 900 locations are being offered for exploration, with as many as 100 licences due to be awarded.

The decision is at odds with studies by international climate research groups such as Global Energy Monitor, which says fossil fuel projects should be closed down, not expanded.

Ms Johnson, who works for a hotel, was part of a Just Stop Oil demonstration with about 200 others and was attempting to glue her hands to the bridge over the Thames when she was taken away by four police officers.

In the video of her arrest, which has been retweeted by more than 50,000 people, including the comedian and actor Ricky Gervais, she is heard saying: "I'm doing this for my son. The government's inaction on climate change is a death sentence to us all.

"The United Nations has said we should have no new oil. Liz Truss wants to open 130 new oil licences, that's a death sentence to this planet."
Ms Johnson told the BBC she understood others felt that accessing further sources of fossil fuels might bring energy prices down.

"We've looked at movements in the past, like civil rights movements and the suffragettes movement and how they got what they wanted and they were disruptive.
"It's only when we look back now that we kind of herald them as these sort of saviours."

A government spokesman said 40% of power was now coming from cleaner and cheaper renewable sources, but it had to continue to explore carbon-producing energy at the same time.

He added that with "Russia weaponising energy across Europe, we must make sure we do so in a way that protects energy security by boosting homegrown energy supply and reducing our dependence on foreign imports.

"But we will also continue to drive forward our commitments on nuclear and renewables like offshore wind."

Met Police made 29 arrests on 2 October as Waterloo Bridge was closed to traffic for a time.

Ms Johnson, who began protesting against climate change in 2019, said she had received many supportive messages since her arrest on suspicion of obstructing the highway.

She was given police bail and is due to answer it at Hammersmith Police Station on 28 October.
#Johnson