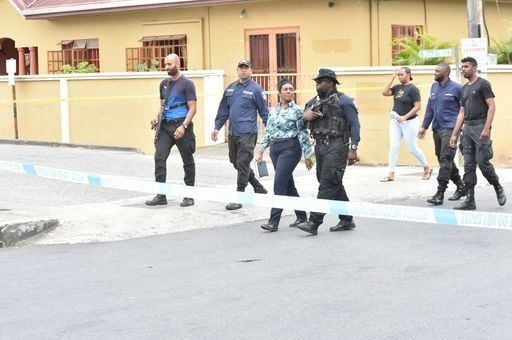 Two Morvant men were killed by police in Barataria yesterday, as they conducted a sting operation to apprehend suspects they believed were using social media sites to lure unsuspecting victims to locations and robbing them.
The men, whose identities remained unknown up to late yesterday, were killed around noon, while a third man who was with them was held and remained in police custody last night.

The midday shootout occurred between Tenth Street and Eleventh Street, along Tenth Avenue, Barataria—and sent employees of nearby businesses, as well as the busy gas station at the Maritime intersection, scampering for cover.

As residents locked their doors and the gas station operator rolled down their metal shutters, the plainclothes officers were quickly able to secure the scene and reportedly retrieved two illegal firearms on the suspects.

The sting operation was carried out following more than 20 reports of robberies within the last three months, where all the victims reportedly made transactions online via Facebook Marketplace.

One officer explained that the majority of incidents centred around advertisements for vehicle sales which saw the suspects posing as sellers. However, when the intended buyers arrived at specific venues to purchase the vehicle, the suspects would then attempt to rob them.

In yesterday’s incident, two officers pretended to be interested in purchasing a car valued at $25,000.

The entire transaction, which was set up via Marketplace, saw the suspects instructing the “buyers” to come to Eleventh Street and Tenth Avenue, Barataria to meet at noon.

The three suspects reportedly parked their white B13 car at the corner of Tenth Street and Tenth Avenue, following which two suspects got out and walked the block to meet the potential buyers.

It is alleged that as the two suspects were talking to the officers about the purchase, the suspects attempted to rob the undercover officers, who returned fire, killing both.

It is believed that as the driver heard the shootout, he got out of the idling car and walked towards Eleventh Street, where he too shot at the officers, who returned fire, injuring him. He was later taken to the Barataria Health Centre by officers.

Praising the efforts of the North Eastern Division (NED) officers yesterday, one business owner said, “I am glad…they out here distressing hard-working people.”

One elderly woman who lives close by added, “I was scared when the shooting start, it was so close. I didn’t know it was the police…I thought it was these bandits.”
#Facebook