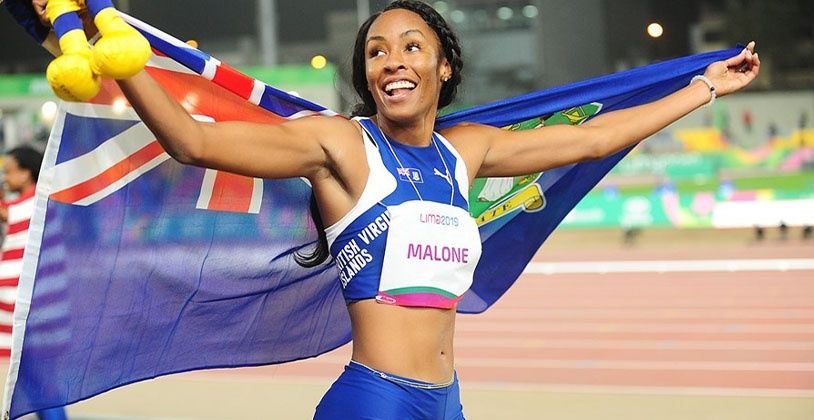 Long Jump athlete Chantel Malone has responded to the many negative comments of her receiving a $12,000.00 cheque from the Government of the Virgin Islands for making it to the finals at the recent Tokyo Olympic games.
In a Facebook post today, September 30, Malone said the money will actually only cover her coaching fees, and expressed concerns over the 'tear down' mentality in the BVI.

"That 12k y’all talking about covers my coaching fees and then it’s back at ZERO. Not to mention the medical bill that I’m too afraid to open Kyron McMaster 🥴. So yes, although I acknowledge everything that’s going on. My HARD WORK and SACRIFICES made WILL NOT be discredited. What my teammates and I do IS NOT for fun or leisure! It’s our JOB," she lamented.

Malone added, "this mentality that we have to tear people down is beyond me! I AM so that others know THEY CAN."

She said several persons have encouraged her to respond directly to the many posts.

"A lot of people have been messaging me about commenting on certain posts. “Don’t mind them” or “who we beefing with” ( from my riders lol🤦🏾‍♀️👀). I said I wasn’t going to give it any energy but at this point I’ll say this. I do acknowledge that a lot has been going on in the BVI and I stand 100% if not more with making sure kids are supported and given all the tools and education needed to be successful in life," she said.

The athlete added, "my problem lies with people who think I received “free money” and “She’s a Malone”. Well here’s the thing I’m a Skelton too and guess what; I STILL HAVE TO WORK EVERYDAY FOR EVERYTHING I HAVE ACCOMPLISHED while having financial struggles to accomplish my dream and in turn make my country proud."

Malone said the BVI has a lot of talented persons who are indeed of support.

"We have so much talent (outside of business) in the BVI. From designers, athletes, artists, musicians, etc. and unfortunately a lot of the talent dies or stays hidden because of the IGNORANCE and lack of support! But if it’s someone from overseas “big ups to them right?” When you have current athletes and upcoming athletes talking about switching allegiance or quitting it’s because of stuff like this."

Malone said, "Change the narrative! Problems within the community can be solved without finding fault in someone else’s success/ achievements."

Malone arrived in the territory on Tuesday, September 28, at the T. B. Lettsome International Airport to a welcome reception where the monetary gift was presented to her. The cheque was handed over by Acting Premier and Sports Minister Hon. Natalio Sowande Wheatley.
#the Virgin Islands  #Facebook