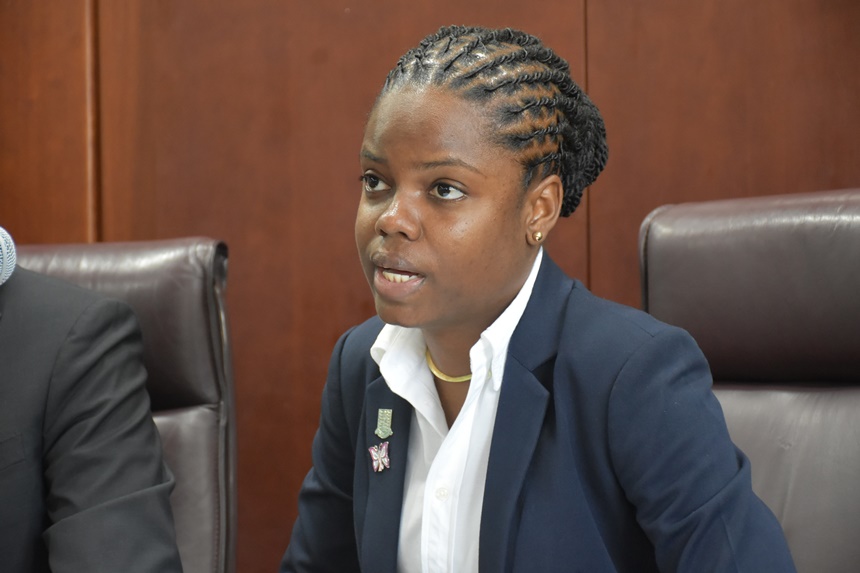 The Opposition is lying about involvement in HOA insurance plan

Stating there is evidence to support her claim, junior government minister Sharie de Castro has said the members of Her Majesty’s Loyal Opposition are being dishonest about their involvement in the now-controversial group insurance plan being sought for House of Assembly (HOA) members.

The government recently released a Request For Proposal (RFP) for any licensed Virgin Islands insurance company to offer the plan. However, the Opposition said in a statement on Monday that they are concerned about the RFP since “there being no consensus by all members of HOA to issue such notice”.

Responding this morning, de Castro said the Opposition is lying and is only denying “their agreeable involvement in this process” because of the public backlash that has happened since news of the insurance plan surfaced.

Opposition legislator and Second District Representative Melvin ‘Mitch’ Turnbull is head of the committee appointed to explore the feasibility of the initiative. And according to de Castro, Turnbull and Opposition Leader Marlon Penn have been actively involved in the process from the start.

“All preliminary meetings with local insurance providers were conducted by the Member for the Second District, who then reported to the Committee, following which presentations were made to the Committee by local insurance providers. Subsequently, the Ministry of Finance advised that a formal procurement process should be engaged. Consequently, all negotiations regarding the Request for Proposal (RFP) for supplemental health coverage was handled by the Member for the Second District, in conjunction with the Ministry of Finance,” said de Castro who also sits on the aforesaid committee.

She continued: “Once negotiations regarding the RFP with representatives from the Ministry of Finance were concluded, the said representatives then met with the Members in an Informal Meeting of the HoA on April 27th, 2021 to report on the proposed agreement reached. To my recollection, it should also be noted that during the informal meeting, all elected members except one, who was absent, had the opportunity to participate in related discussions and we all unanimously agreed that the RFP should go forward as proposed.”

The junior minister then went on record to say “all members agreed with the proposal”.

This is contradictory to recent statements from Turnbull who said in a letter to HOA Speaker Julian Willock that he (Turnbull) has always been against the insurance plan in its current state and that, “before anything goes public” he would have to write a report based on his findings as an experienced professional in the insurance field.

De Castro said that statement from Turnbull is not true.

“It should be noted, that in actuality, at no point did the member express reservations regarding the publication of the tender document. In fact, the said member met with the Ministry of Finance to make additional recommendations to the tender document after the document was presented to members and prior to it being made public. Most importantly, the member was copied on and in some instances addressed directly in electronic correspondences at every stage during the process. As such, for the Member to assert that the document was finalized without his involvement and subsequently made public is grossly and maliciously mendacious,” de Castro said.

She then accused Opposition Leader Penn of “publicly amplifying the false pronouncements” in his press statement released on Monday, June 7.

She said: “The Leader of the Opposition, in this instance, is being disingenuous, as he too was copied on correspondence regarding the RFP and could have indicated his opposition at any point during the process.”

“The press release (from Penn) also referenced a Terms of Reference (ToR) requiring the lead Member of the Steering Group to “provide a report to the HoA informing Members on whether a proposal to procure private health insurance was ready for tender, along with recommendations on how to proceed.” However, I can state unequivocally that there is no such requirement in any ToR. As such, this attempt to alter the facts can only be seen as a deliberate move by the Members of the Opposition to deny their agreeable involvement in this process and thereby deceive the public into believing that they had unheard concerns on the subject, all in an effort to score cheap political points,” de Castro added.

Process should be halted

She concluded by stating she believes the process should be “halted so that due consideration could be given to the concerns of the people”.

The first-term legislator said she would also support a decision for the matter to be “referred back to the HoA for a collective decision on the way forward”.

The controversial insurance plan seeks to circumvent the National Health Insurance scheme and offer legislators coverage for cosmetic surgery (in the event of an accident), alcoholism and substance abuse rehabilitation, among other things.