‘The time for change is now’: demonstrators around the world demand action on climate crisis

Up to 100,000, including Kahnawake Mohawk delegates, brave Glasgow rain as 22 arrested after scientists blockade bridge

People on almost every continent were gathering for marches and rallies on Saturday to mark a Global Day for Climate Justice, halfway through the Glasgow climate change summit.

Activists in the Philippines, eight hours ahead of the UK, had already finished their rally as protesters gathered in Scotland. There were also rallies in South Korea, Indonesia, the Netherlands and France. The Belgian arm of Extinction Rebellion occupied a street in Brussels.

The Scottish morning saw heavy rain, but the early mood was one of cheerful acceptance. “What do you expect protesting in Glasgow?” asked Lucy Bell, who works for the Vegan Kind, an online vegan supermarket based in Rutherglen. “There are so many people here from different backgrounds. It’s easy to get discouraged by the negotiations going on behind closed doors but I’m feeling optimistic this morning despite the rain.” 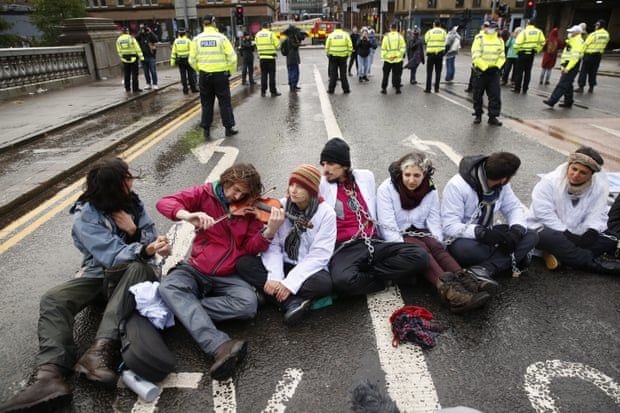 In Glasgow city centre, direct action group Scientist Rebellion blocked the King George V bridge, one of the main routes to the south side, at about 11.30am. More than 20 scientists, from students to a retired professor, all wearing lab coats stood chained together by the neck. The coalition of activist academics believes non-violent civil disobedience is the only remaining option to draw attention to the extremity of the climate crisis.

“There have been 25 previous Cops with no measurable impact on GHG [greenhouse gas] emissions,” said Tim Hewlett, co-founder and one of those on the bridge. “In fact, about half of the GHG emissions have been released since COP1 in 1995. So we’re not here to speak truth to power – they already know – but to the powerless, and to raise their voices in turn.” Hewlett added that the lab coats they were wearing were at least offering some protection from the rain. The bridge was blocked until just before 4pm, and the group said that 21 people had been arrested.

Later on Saturday, Gary Ritchie, Police Scotland assistant chief constable, said: “Glasgow has today hosted a public protest the size and scale of which was beyond anything many of us … can ever remember.”

The day had “passed largely without incident”, he said, but “a group of people was contained by officers after their conduct deteriorated, pyrotechnic devices were used and they brought the procession to a halt”. One person was arrested after the march. This is in addition to the 21 arrests already noted on the bridge.

The march got under way at about midday, and was headed by a small group of First Nation people from Kahnawake Mohawk territory located in Quebec, Canada.

“It’s so evident that indigenous people hold the answers – they have to start listening and start thinking seven generations ahead, not just the immediate need,” said Karahkwintha, 23.

Cop delegates were also scattered among the huge crowds. Tracy Sonny, 37, a Cop negotiator from Botswana focused on climate adaptation and capacity building, was at the march to show solidarity and call for more unity. “We need to see more political will and a change in mindset … we’re already feeling the impact of climate change; we need to respond now, people are drowning.”

Despite the dreich weather, the atmosphere was electric as each bloc made itself heard with live music and chants such as “system change not climate change” and “world leaders at Cop26 … your inaction makes us sick.” 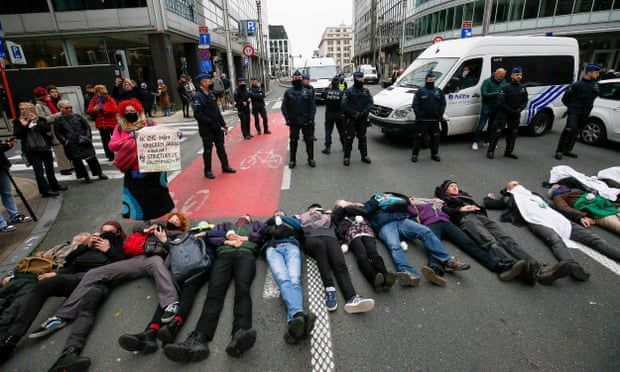 Members of the climate action group Extinction Rebellion during a protest at Rue de la Loi in Brussels.

Grainne McGinn, 22, a wheelchair user from Glasgow, attended Friday’s youth protest and Saturday’s with a sign that read “sustainability requires accessibility”. “Climate change is so important but youth voices, especially disabled youth voices, are not being heard. We’ve seen in the news how inaccessible Cop has been for delegates. That’s the day-to-day experience for all disabled people and it’s so important that our voices are heard in the conversation on climate change. I’m here to represent.”

Vegan activists fought strong gales to make their point with four giant inflatable animals tethered on ropes above their heads or strapped to the ground. Each symbolised a different problem with the livestock industry: a cow for methane, a chicken for Covid and health, a fish for microplastics, and a pig for obesity. “The cow in the room is being ignored at this Cop,” said Carl Le Blanc of Climate Healers. “Animal agriculture has been taken off the agenda and put on the menu.” 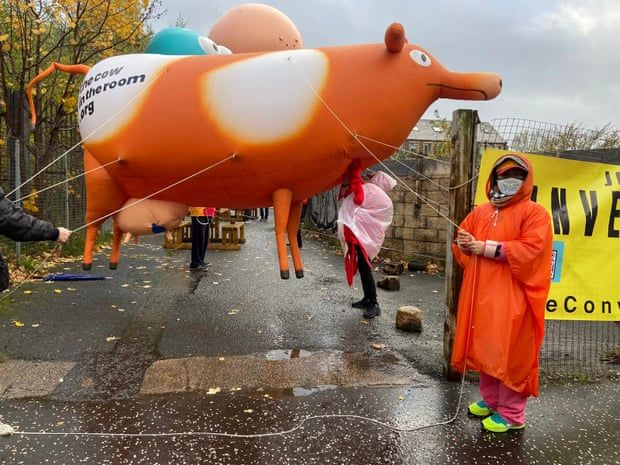 ‘The cow in the room is being ignored at this Cop,’ said Carl Le Blanc of Climate Healers, heading off to join the Glasgow march during Cop26.

Roisin Greaney, 28, a postgrad student from Dublin said: “I’m here today because, I would say a small group of people but in this case it’s a very large group of people, wants to put a sustained pressure on the people inside the blue zone.

“I’ve seen it in the past, I’ve seen small groups of people come together and scare governments, scare companies, and make them do things. So I think this kind of direct action works, and it’s amazing to see people from so many different organisations and parts of society.”

By the afternoon the rain clouds had parted and the sky had begun to brighten as crowds of marchers spilled across the expanse of Glasgow Green, still singing, chanting and playing music.

The mood was “celebratory, positive and punchy” said Mary Martin from Coatbridge, who had marched from Kelvingrove. “Walking the walk,” she laughed as she shivered against a strong gust of wind. As for the progress of the climate talks, “I’m holding my breath.” The lack of inclusivity at the negotiations concerns her, the opposite of her experience on this march where she notes the rapport between different groups.

In London thousands of protesters, including trade unionists, refugee rights groups, students and environmentalists, marched from the Bank of England to Trafalgar Square. 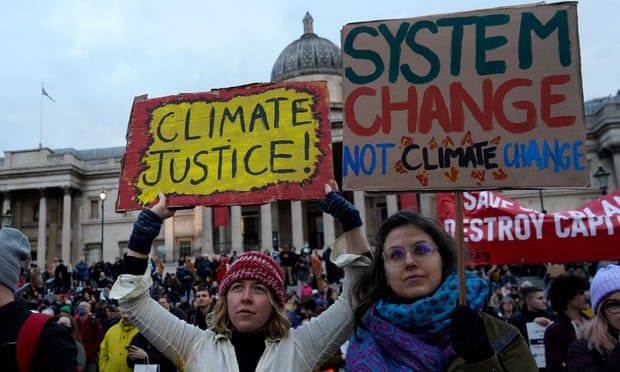 Protesters gather in Trafalgar Square having marched from the City of London.

Demonstrators repeatedly expressed exasperation that politicians were failing to tackle the climate emergency with the required urgency. “We don’t have time,” said Paula Somrisa, 41, from Oxford. “It’s great to make statements about ambitions and what is going to happen in the future but we really need action now.”

Dawn Fuller, 56, said: “We have had enough of hearing them talk – now we absolutely have to see some real action.” She said her two grown-up children were increasingly anxious about the escalating climate emergency. “We have seen so much greenwashing at Cop26 … But it has to stop – it is our children’s future at stake.”

Many protesters called for urgent reform of the economic system and linked the climate crisis to global inequality and structural racism.

Rebecca Hotchkin, 23, who is studying medicine in London, said global health inequalities were being exacerbated by the climate crisis. “Health justice and climate justice are linked. Governments must start addressing the underlying causes to the various crises we face.”

In Glasgow organisers estimated that more than 100,000 people were in attendance, but police were reluctant to put a figure on the crowd. In London they said about 10,000 were marchers, although organisers put the figure closer to 20,000. Worldwide there were more than 300 protests, with more than 100 in the UK alone.

Nicola Sturgeon told reporters on Friday that she had confidence that the Glasgow climate march would be policed “appropriately”, adding that Iain Livingstone, Police Scotland’s chief constable, had spoken to the force’s independent advisory group after the concerns were raised in an open letter.