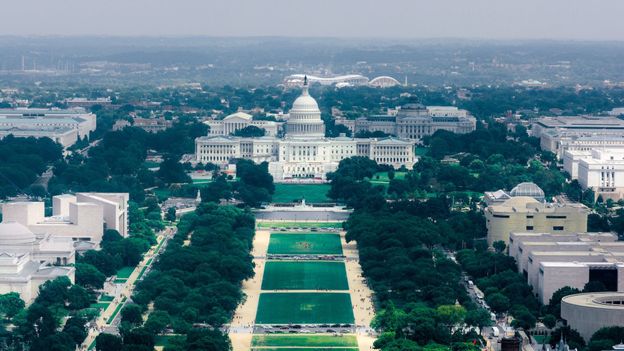 The true story behind the US' first federal monuments

The most famous African American in colonial America is largely forgotten today, but his longest-lasting contributions are hidden in plain sight in Washington DC.

"Are you sitting down? I have news for you." Gwen Marable's cousin from the US state of Ohio called her at home in Maryland about 27 years ago. "We are descended from the sister of Benjamin Banneker, Jemima."

The Banneker family, which numbers over 5,000 known descendants today, only learned about this astonishing connection to their ground-breaking but little-known ancestor through the wonders of DNA testing. As such, no personal stories about him, no artifacts, were handed down through the generations.

"Remember, he was born one year apart from George Washington," said Marable, who went on to help launch and serve as president of the Benjamin Banneker Historical Park and Museum in Baltimore County, Maryland. "People were not writing about black people at that time."

What we do know is that this self-taught, free African American tobacco planter was, among other things, a mathematician, scientist and astronomer who helped establish the boundaries of Washington DC. To this day, nearly all 40 of those boundary stones – which mark the original 10-mile-by-10-mile diamond shape of the US capital city – remain in plain sight. They are the oldest set of federally placed monuments in the United States.

In 1790, the brand-new president George Washington was authorised to delineate the site of the new capital city along the Potomac River. It was swampland overgrown with forests, vines and weeds, sparsely settled with tobacco farms. He needed a survey team to establish its boundaries. 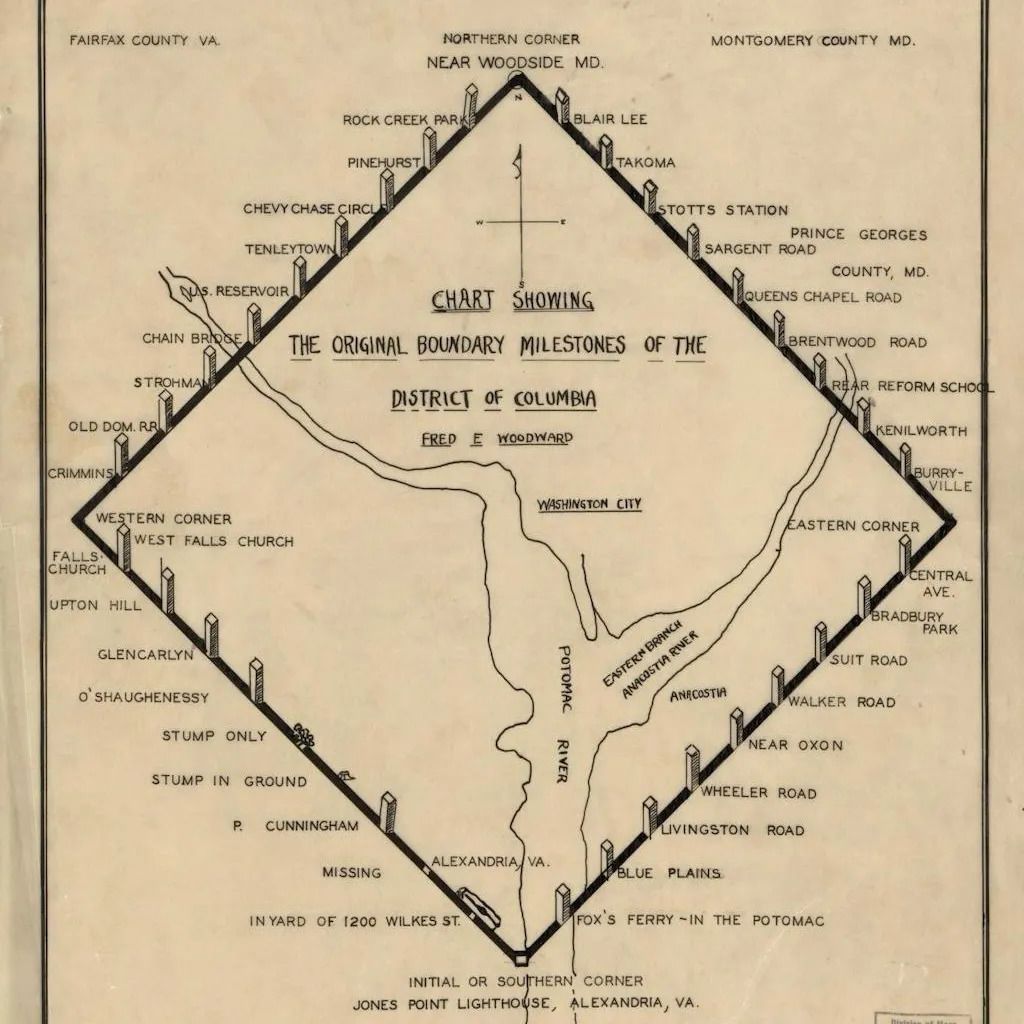 The boundary stones mark the original 10-mile-by-10-mile diamond shape of the US capital city
Enter the foremost surveyor at the time, Andrew Ellicott, who had made a name for himself charting 11 states (and making the first topographical study of the Niagara River and Niagara Falls). But he needed an assistant who could read the stars, to make the placement of the markers as accurate as possible.

His cousin recommended a neighbour friend, Benjamin Banneker, but according to historian Silvio Bedini (who wrote what is considered the definitive biography of Banneker), Ellicott had some concerns. "Andrew Ellicott questioned the potential competence of a black man without schooling or scientific training," Bedini explained in a 1991 article for the magazine of the DC History Center. "The prospect of relying upon an untrained amateur astronomer for the precise astronomical data upon which his survey would be based was not a cheerful one."

But with no other prospects, the two set to work.

Lying on his back for six nights, 61-year-old Banneker recorded the precise times of the stars' transits. With these calculations, the first stone marker was installed at Jones Point (on the Potomac River just south of modern-day Old Town Alexandria, Virginia) on April 15, 1791, amid great fanfare. 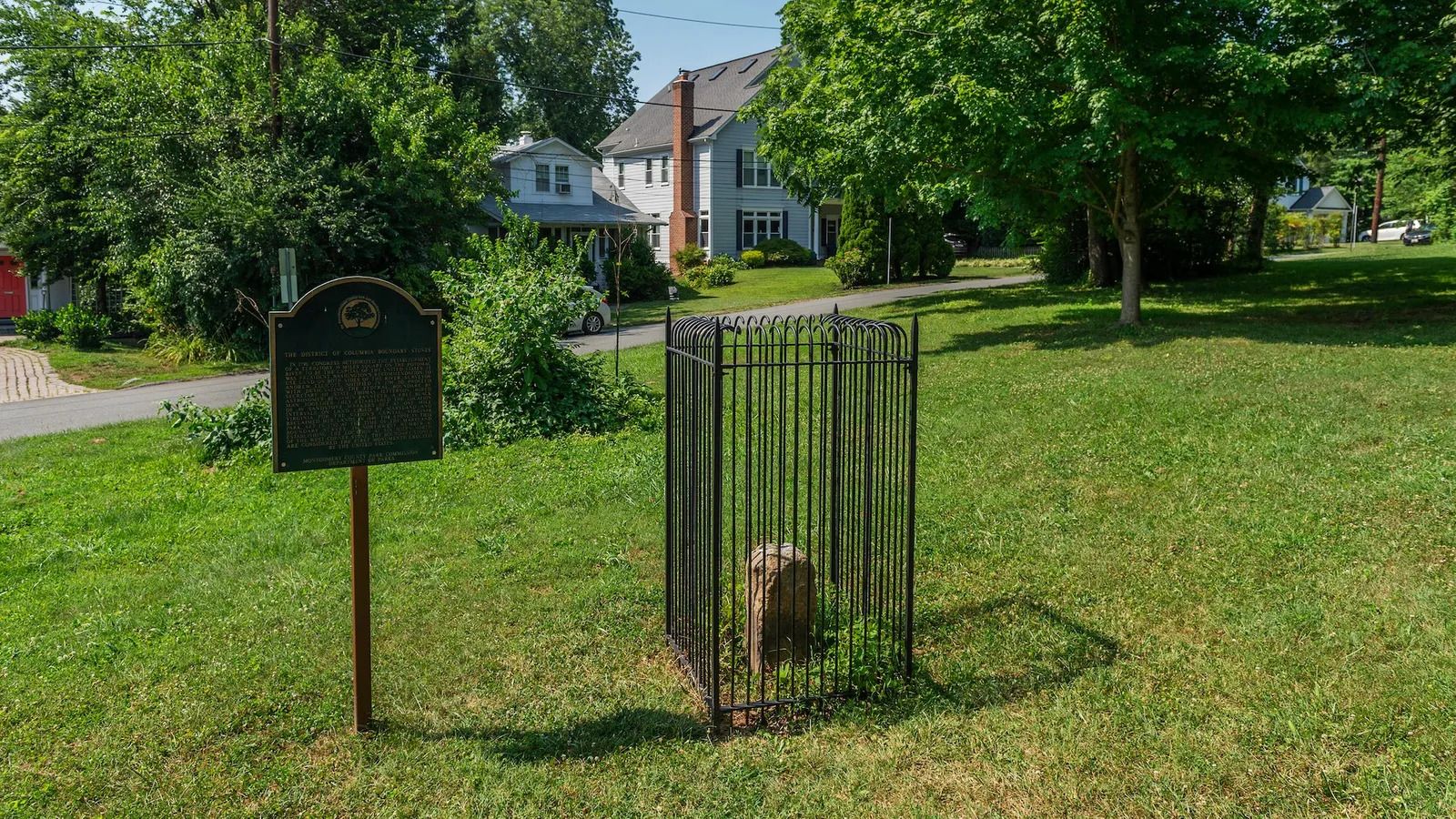 Many of the boundary stones are on people's property, and several are in parks

Today, that marker is visible through a window in the seawall of the 19th-Century Jones Point Lighthouse. One foot square and three feet high, it – like all of the markers – was made from the same sandstone from Virginia's Aquia Creek that was used to construct the White House, US Capitol and Supreme Court Building.

From there, the other markers were placed one mile apart. Each is numbered according to its quadrant and location, starting at the south cornerstone at Jones Point (SW1, for example, is Southwest 1, located in DC's south-west quadrant).

Each of the four sides of each marker bears the inscription of either "Virginia" or "Maryland", depending on its border state; the words "Jurisdiction of the United States" and a mile number; the year "1791" or "1792" depending on when the stone was added; and the magnetic compass variance at that place. They reside inside ornate black cages that the Daughters of the American Revolution organisation installed in the early 20th Century. Thirty-six original stones remain in place, in various states of deterioration (sandstone was not the best material, it turns out), while three are replicas and one is a plaque.

Most Washingtonians have no idea what these stones are, even though they pass by them every day. But some people make a pilgrimage to visit them, providing a fascinating exploration of DC's varied neighbourhoods. Many are on people's property, and several are in parks. You'll find them in the middle of a roadway median, in a cemetery and at the base of a water tower. (Note that land seized by the Federal government in 1790 was returned to Virginia in 1846, so the stones don't reflect DC's modern, reduced border.) 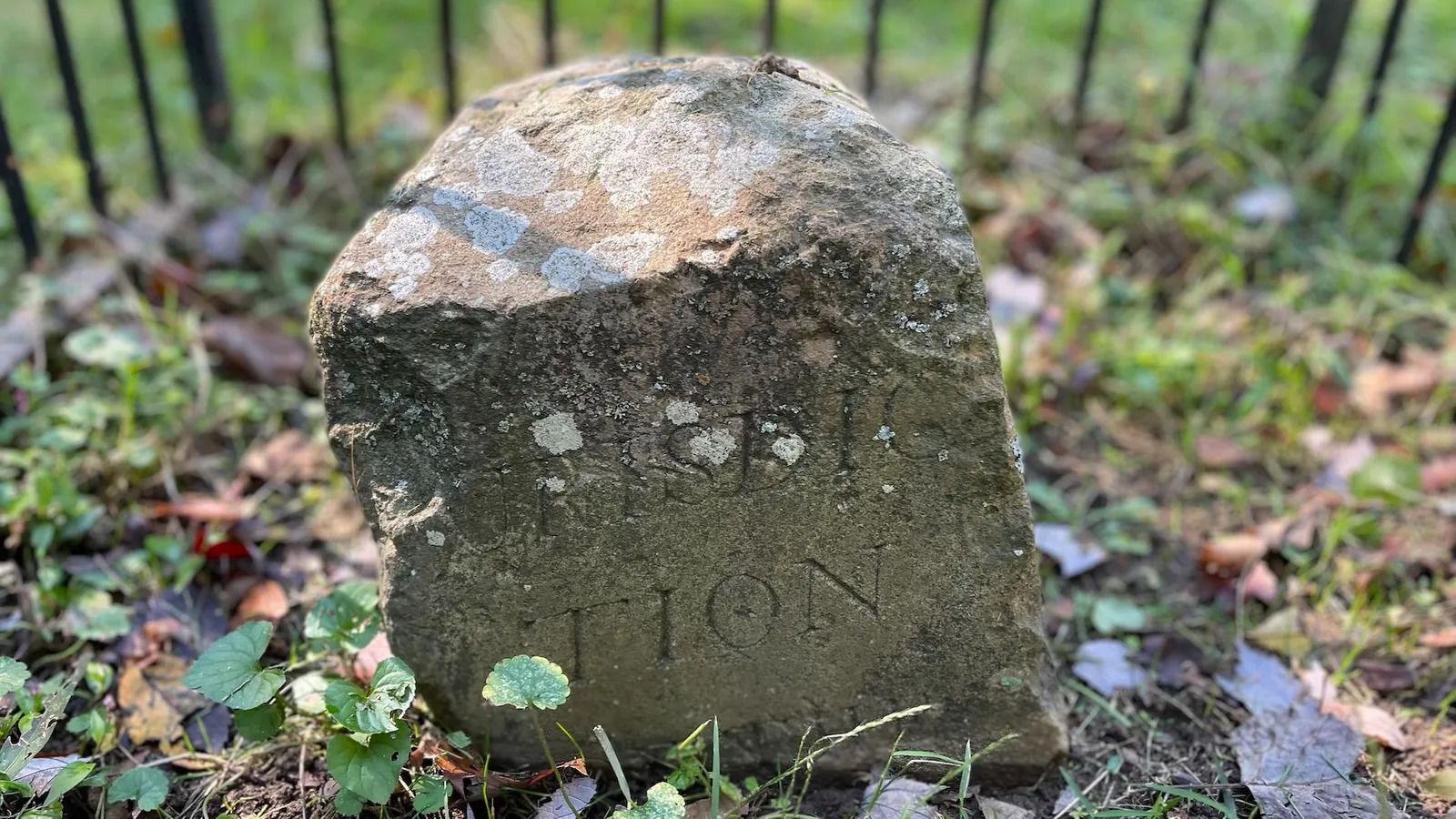 Each marker bears an inscription including "Jurisdiction of the United States" and "1791" or "1792", depending on the year it was added

NW4 and NW5 are also pristine. "But they're behind the US Army Corps of Engineers' property line," Powers said. "You have to call to gain access."

The most difficult one to reach is SE9. "You have to park on the highway and use GPS coordinates as you make your way through the woods, down by the Potomac River," he explained. "There's no path."

It's not known if Banneker attended the Jones Point event in 1791 celebrating the south cornerstone, since his name is not noted in newspaper accounts. Chances are, he was a spectator.

Regardless, a few months later, he wrote a letter to Secretary of State Thomas Jefferson about his work on the boundary stones. "Jefferson had been saying publicly that he didn't believe black people and enslaved people were of the same standards as white people in terms of brains and physical abilities," said historian Jane Levey, interim editor of the DC History Center's Washington History magazine. "Banneker basically goes on about how he needs to change public opinion about black people's abilities." 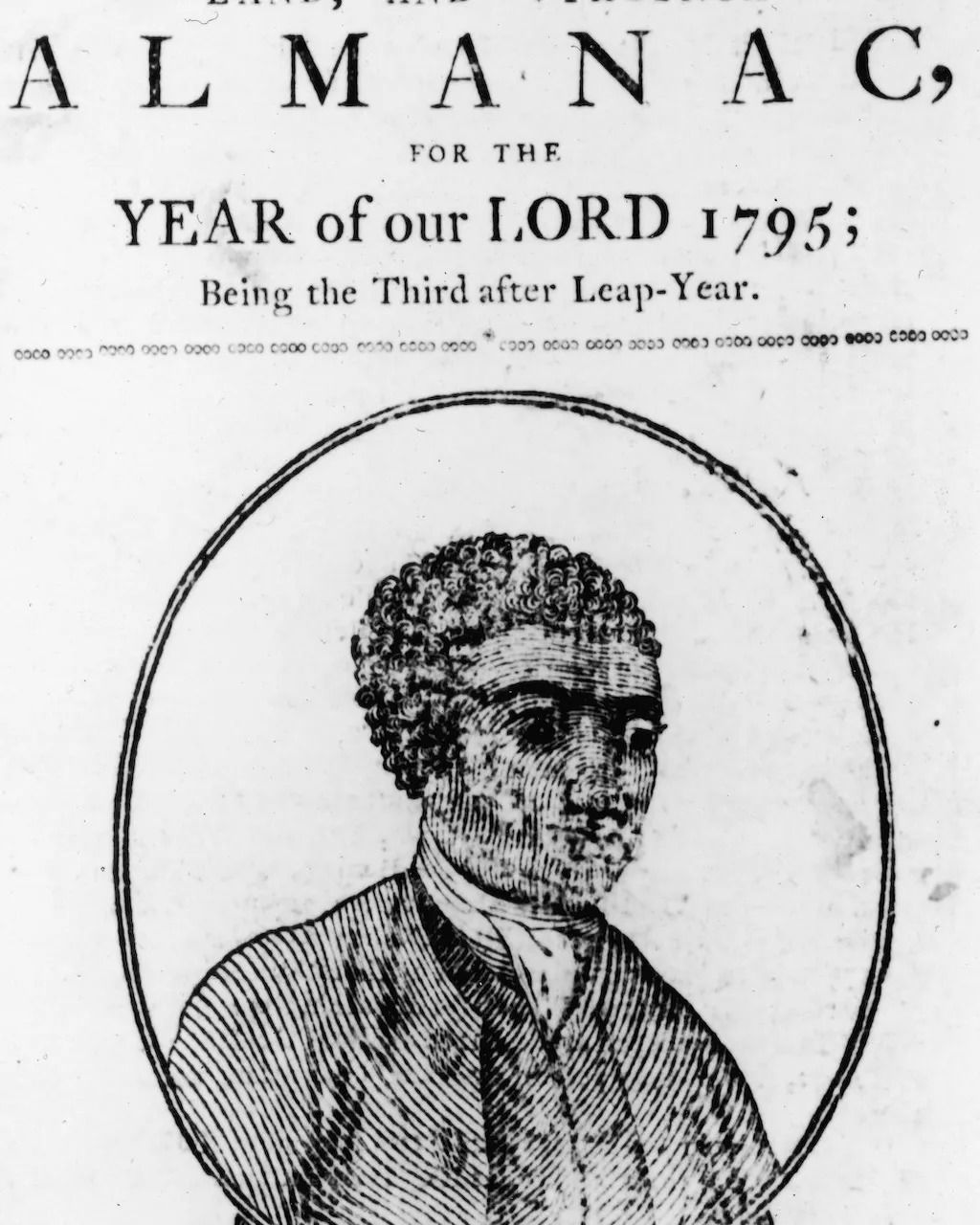 Banneker was a mathematician, scientist and astronomer who also published six farmers' almanacs

"He writes to Jefferson saying he freely and clearly acknowledges he's of the African race," said Audrey Davis, director of the Alexandria Black History Museum. "He had a pride in his race and of his colour. He was a mathematical genius, a clockmaker, and he was interested in riddles." He also published six farmers' almanacs, using scientific methods. "He was a renaissance man."

Jefferson replied: "Nobody wishes more than I do to see such proofs as you exhibit, that nature has given to our black brethren, talents equal to those of the other colours of men, and that the appearance of a want of them is owing merely to the degraded condition of their existence both in Africa and America."

Whether the exchange altered Jefferson's stance on his views of African Americans and slavery, Banneker was the only black man to challenge the future president's suspicion of inequality during his lifetime.

Banneker died not long after, at the age of 74 in 1806. He never married and had no children. Even though personal connections were lost until the recent shock to Banneker family descendants delivered by DNA testing, his scientific contributions to the US are remarkable and steadfast.

But it's the crumbling boundary stones still gracing the Capital City that provide a daily reminder of Banneker's contributions to anyone paying attention as they walk by.