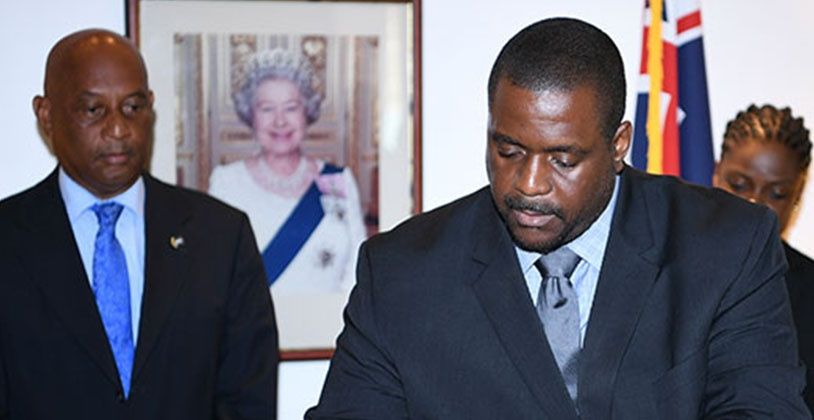 Premier and Minister for Finance Hon. Andrew Fahie told the ongoing Commission of Inquiry (CoI) that he fronted the Fast-track Regularization Programme in 2019 because Minister for Immigration, Hon. Vincent Wheatley was a newbie to the political sphere.

Premier Fahie was asked by Counsel to the CoI Mr. Bilal Rawat to explain why he was the face of the initiative during his appearance today, Monday, October 11, when he had previously mentioned not interfering with other ministries.

“This is a very touchy subject in our country. There are persons who are strongly against persons from other Caribbean islands getting status in this country, period, and there are those in terms of indigenous, who see it as something that should be done," the Premier said.

He added, "it is a very, very, very, volatile political topic, and when we got into office, given the backlog that we were told again and therefore it became a question “what do we do?”

Premier Fahie pointed out that his administration was young and fearful of the pressure the programme would attract.

“I am in a government where none of my members was ever in government before, and when we discussed this as a government and decided we wanted to move forward with it, there was a sense of fear among some of them to go and be the one to talk on this. But, I told them that I would go ahead, I would announce it, I am the head of the country, I am the Premier, and I feel strongly about the matter, and I would announce it, but it belongs to the ministry of Natural Resources, Labour and Immigration," he told the CoI.

He said it would have been too much “political pressure for a newcomer to have announced the programme.

"I wasn’t going to put a young politician to announce something as heavy as this; this is a heavy topic. For you coming in, it may not seem so, Commissioner, but this is a heavy topic, and there are persons up to now who will meet me and tell me, 'we will not reelect you again because you give status away.’

He also said he sleeps well, knowing he did the right thing.

I had No Part In The Process

In the meantime, Premier Fahie was also quizzed about the processes involved in the execution of the programme by Counsel Rawat; however, Premier replied that he was not aware of it.

“I don’t know what they are; what I told them is whatever needs to be done under this fast-track programme, fast-track it, let that be done. Those that dealt with it would have to answer that; all I did was to ensure that when it came to Cabinet, we did our part, I did not get involved,” he replied.

Mr. Rawat asked him if it wasn’t his proposal that the Immigration Board not get involved, Premier Fahie said, “the whole policy was done under Immigration under the Ministry of Natural Resources and Labour, and they can answer that when they come…you can ask Minister Wheatley because his ministry dealt with it."

Premier Fahie continued: "I never even dealt with even half an application, not even a quarter.”

The programme was launched in July 2019 by Premier Fahie. It was to grant persons who lived in the British Virgin Islands for 15 years instead of 20 years, belongership.

During that initiative, there were 1,321 new applications for belongerhsip, along with 320 applications that were there previously and considered to be backlogged.

A total of 1,273 persons were successful in their application for belongerhsip.