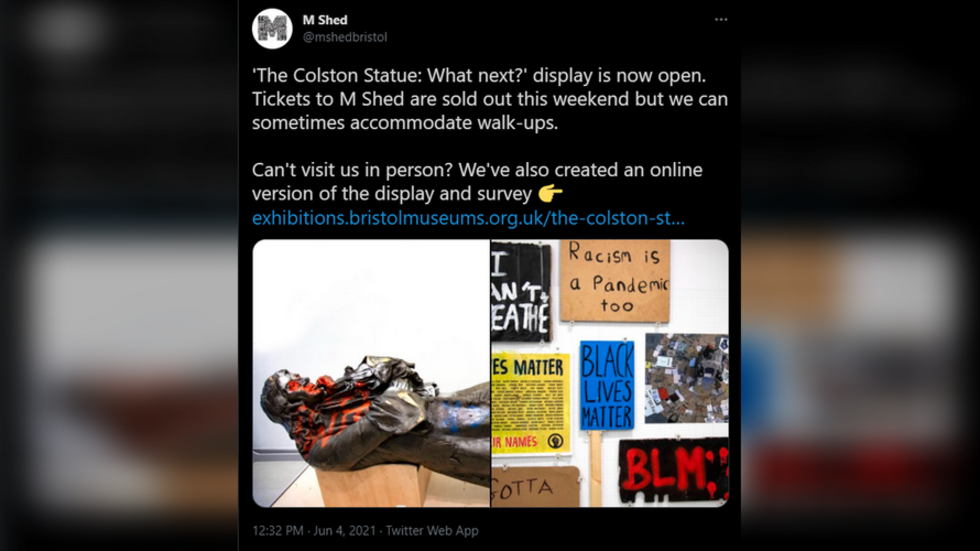 Toppled Edward Colston statue, complete with ‘preserved graffiti’, is on display in a Bristol museum... alongside BLM signs

Bristol’s statue of slave trader Edward Colston, pulled down by Black Lives Matter (BLM) activists last year, has re-emerged as a local museum exhibit, with visitors asked to share what they think should become of the sculpture.

The statue was targeted by protesters during a large demonstration in the city on June 7, 2020. After being toppled, it was graffitied and then thrown into a nearby harbour. It was pulled out of the water several days later by Bristol City Council and put into storage. The brazen act of vandalism made headlines amid worldwide protests sparked by the death of George Floyd at the hands of the Minneapolis Police Department.

Colston left money to various charitable causes after his death in 1721, but his involvement in the transatlantic slave trade has prompted activists to demand that Bristol be scrubbed of both his name and his likeness.

After months of preservation work (while being careful not to wash away the graffiti), the statue is finally being reintroduced to the public – as a museum exhibit. Bristol’s M Shed museum will display the sculpture alongside a curated selection of placards from the protest that led to its demise. Due to damage it sustained, the statue is unable to stand upright, and, instead, is being showcased lying on its back. Orange graffiti reading “BLM” is still visible on the statue’s face, while its leg is tagged in blue paint with “Prick.”

The museum has also preserved numerous signs with slogans such as “Racism is a pandemic too” and “I can’t breathe.”

The exhibition, titled ‘The Colston Statue: What next?’, invites members of the public to fill out a survey to help determine the future of the statue. Possible options include completely removing it from public view, including it in an exhibition about the transatlantic slave trade, or restoring it to its original state.

The initiative was spearheaded by the We Are Bristol History Commission, which was established in response to the Colston incident. The temporary display is designed to be the “start of a conversation,” the museum explained.

The statue was just one of numerous monuments that were targeted by BLM protesters in cities across the world during months of anti-racism demonstrations, many of which descended into violence. The vandalism sparked fierce debate in the UK and abroad about whether removing statues of “problematic” figures from the past was an attack on shared culture and history.