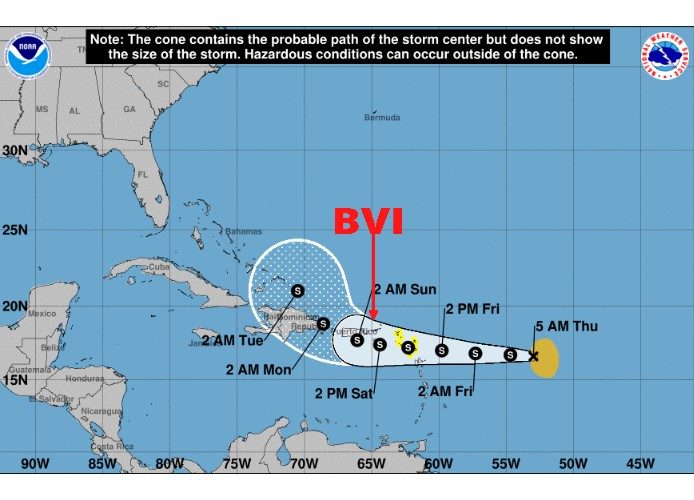 Tropical Storm Fiona forecast to pass over the BVI this weekend

Residents are being advised to monitor and brace for the effects of Tropical Storm Fiona, which is forecast to pass over to the British Virgin Islands this weekend.
According to a weather bulletin from the Department of Disaster Management (DDM), the centre of Tropical Storm Fiona was located near latitude 16.6 degrees North, longitude 53.0 degrees West at 5 o’clock Thursday morning.

Fiona is said to be moving toward the west near 13 miles per hour (20 km/h), and this general motion is expected to continue for the next several days. On the forecast track, the centre of Fiona is forecast to move through the Leeward Islands late Friday and Friday night, and move near the Virgin Islands and Puerto Rico this weekend,” the DDM said.

Fiona’s maximum sustained winds are near 50 miles per hour with higher gusts and little change in strength is forecast during the next few days.

Tropical-storm-force winds extend outward up to 140 miles east of the centre, and the estimated minimum central pressure is 1002 millibars.

“Fiona is expected to produce total rainfall accumulations of three to six inches with isolated higher amounts across the northern Leeward Islands, the British and US Virgin Islands, Puerto Rico and eastern Hispaniola. These rains may produce flash and urban flooding, along with isolated mudslides in areas of higher terrain,” the DDM warned.

“[Surf] swells generated by Fiona are expected to begin affecting the northern Leeward Islands by early Friday. These swells could cause life-threatening surf and rip current conditions. Please consult products from your local weather office,” it added.

The DDM said there are no watches or warnings in effect at this time. However, residents are urged to monitor this weather system closely and be prepared to implement their hurricane plans, if called upon to do so.
#the Virgin Islands