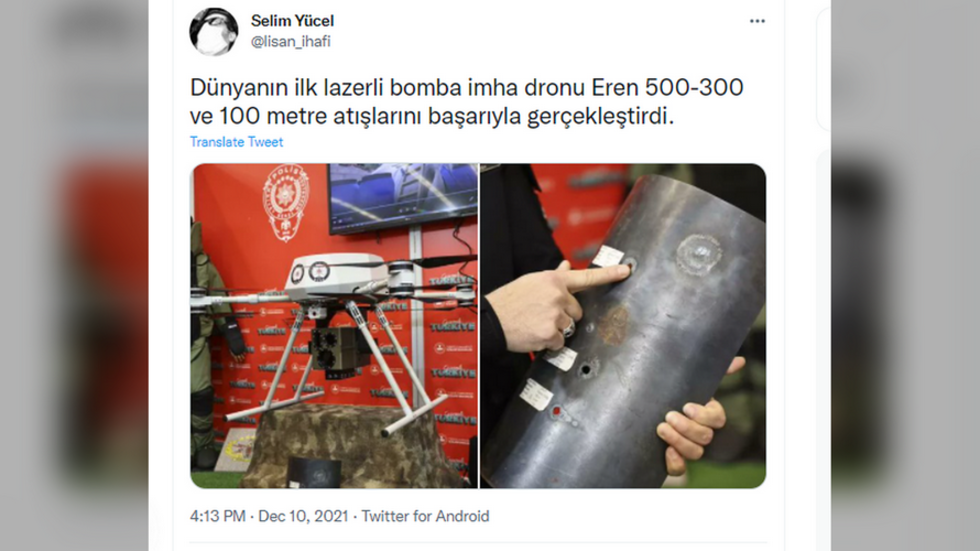 Turkey makes drone that can destroy bombs with laser beam

Tukey has developed a bomb disposal drone equipped with a laser beam that can burn through carbon steel. The aircraft will be used by the military after all tests are completed.

The aircraft will be used by the military after all tests are completed.The Eren drone is designed to destroy bombs and other munitions while hovering up to 3,000 meters (9,850ft) above the ground, Anadolu news agency reported.

The aircraft can “neutralize explosive devices without involving demining personnel” on the ground, Aykut Eroglu, a senior police official, said.

Eroglu said that during a trial, Eren’s laser beam pierced a hole in a three-millimeter carbon steel plate from a distance of 500 meters (1,640ft) in 90 seconds. He added that it took the drone just 10 seconds to do the same while hovering 100 meters from the target.

The drone was developed by TUBITAK, the country’s state defense technology agency, and Turkish company Asisguard. It was showcased at an expo in Konya in October and will be picked up by the military after all tests are completed, Anadolu said.