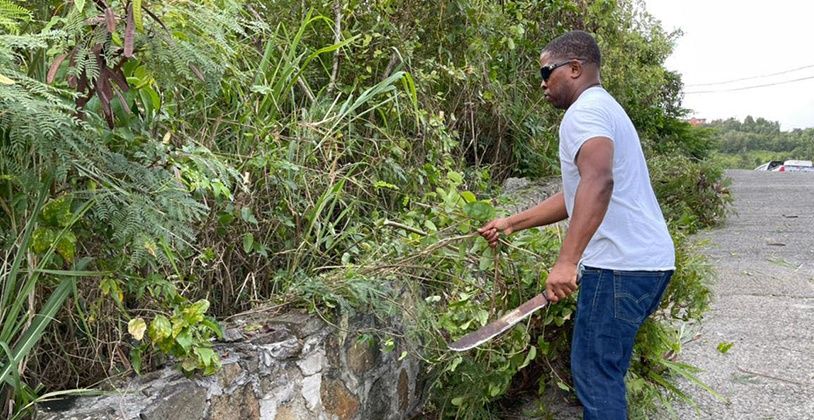 Days after his opposition colleague challenged the government to cut the overgrown bush that has now become unsightly and a hazard to road users territory-wide, Hon. Melvin ‘Mitch’ Turnbull has opted to tackle the issue in his district.
On Saturday, August 21, in a post on the Facebook page “Turnbull For Change” there was a photo collage of the Second District Representative and other residents cutting the roadside bushes.

The caption read: “No bush cutting programme? No problem. Hon. Turnbull, with some community-minded individuals are taking on the bush in the Mount Healthy, Brewers Bay areas. Happy Saturday.”

During the House of Assembly sitting on August 16, Health Minister, Hon. Carvin Malone outlined reasons why the Department of Waste Management was unable to cut the bushes. He had assured that the government has not abandoned the grass-cutting programme, but the programme has, however, experienced some challenges due to staffing issues that have not only affected this area of the department but other areas as well.

The questions were posed by Hon. Julian Fraser, Representative for the Third District.

“The challenges arose as a result of non-replacement of staff by the department who have left; members of the cutting crew submitting medical certificate excusing them from this kind of work and some members of the staff from the street cleaning crew reporting sick on a regular basis which results in the cutting crew being redeployed to carry out their duties,” he explained.

The Minister further stated that the department is in the process of addressing the issues and hope to have them resolved by the end of this summer.

“I shouldn’t have to be doing this; if you drive from west to east and you pass through Sea Cows Bay, you know what I am talking about,” a visibly upset Hon. Fraser said at that time.

During an exchange on the matter, the opposition member said, “You are going to tell me how to ask the question Mr. Minister? I think you ought to go cut the bush off the sidewalk instead of arguing with me…when my constituents are telling me that they can’t go walking in areas they have been frequenting for years before 2016…”

Hon. Fraser, who said it is unacceptable, said that both the minister and the persons responsible for cutting the bushes are seeing the condition of the sidewalks.

“I submitted my question for a sitting (House of Assembly) that was supposed to take place on May 27; I would imagine that once they saw the question, they would go and cut the grass. Now the sidewalks are completely covered. This is nothing personal this is what you signed up for; you campaigned in my district telling the people you will take care of them, they took care of you, and I expect to see those sidewalks clean," the opposition member opined.

Minister Malone said he knows that the bushes need cutting and noted that the issue is mostly in districts one and three.
#Facebook