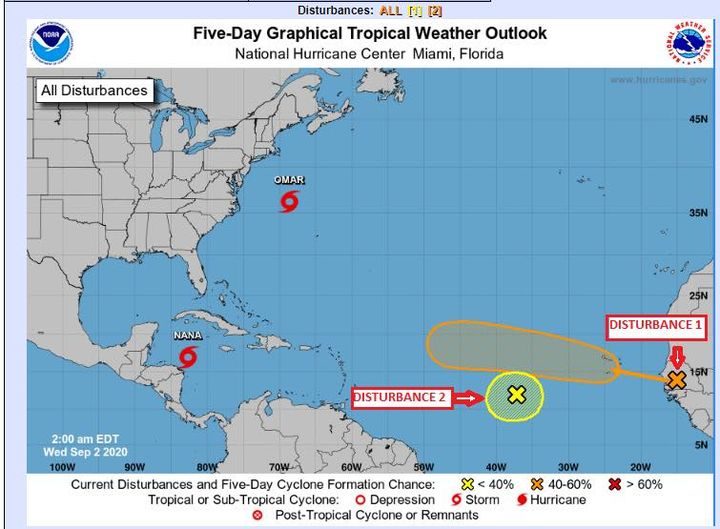 Two weather disturbances being monitored in the Atlantic

Referring to Disturbance #1, the DDM said: “An overall west to west-northwest motion is expected in the coming days. The system exhibits robust large-scale rotation and plentiful tropical moisture. Heavy thunderstorm activity is also robust though disorganized.”

It added that the atmospheric conditions are favourable and model guidance is at least moderately supportive of development.

“Therefore, forecasters think development chances are increasing. It is too early to determine if the system will track far enough south to impact the northeastern Caribbean or curve north before being able to reach the islands. The chance of development is 60 per cent in a five-day period.”

Meanwhile, Disturbance #2 has been described as a small area of low pressure located near 13 degrees north and 36 degrees west on the forecast track.

The system’s small size results in lower forecast confidence in both the track and intensity, the DDM said.

“It is possible that disturbance one could either absorb [disturbance] two or cause it to stall as [disturbance] one passes to the north in several days,” it further stated.

There are also two tropical storms, Nana and Omar, in the region. However, neither system poses a threat to the British Virgin Islands.

“Nana is just east of Belize and may impact that country as a hurricane while tropical storm Omar meanders east of the United States with no threat to land. Both tropical storms like previous have continued to break records as they have formed earlier than typically expected,” the DDM said.