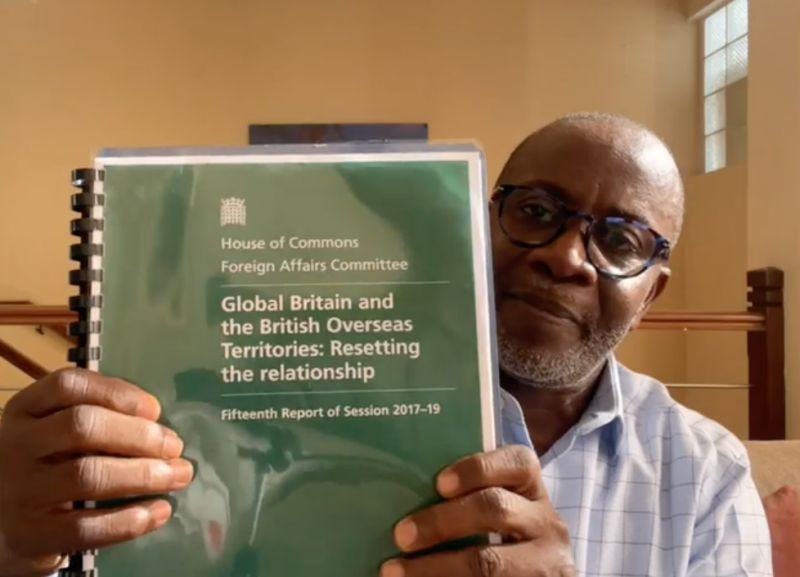 Bishop of the New Life Baptist Church Mr John I Cline has accused the United Kingdom (UK) of institutional racism, regarding its relationship with the [British] Virgin Islands (VI) and its handling of the way forward on the implementations of the Commission of Inquiry (CoI) recommendations.

“The United Kingdom has not changed its approach to us the Overseas Territory and destinations that have the population with my complexion,” the Bishop said while appearing on the June 17, 2022, episode of JTV’s The Big Story with host Cathy O. Richards.

Bishop Cline made the comments while appearing on an episode of JTV’s The Big Story with host Cathy O. Richards.

Stop being a police- Bishop Cline

“If it was the Isle of Man, if it Guernsey, if it was Jersey, if it was any one of their Crown Dependencies, the approach, I believe would be much different,” he said.

He called on UK to have a true partnership with Overseas Territories like the VI and those with a majority black population, rather than being a police.

“And we are saying to the UK, when will you change your ways and instead of just acting like a police, be a partner, be a true partner of the people of your Overseas Territories and we would want to stay.”

As part of its agreement with the UK, the Government of National Unity had submitted a final proposal to the UK government outlining clear timelines on how they will deliver the Commission of Inquiry recommendations but without the need for a temporary partial suspension of the constitution.

UK direct rule not off the table

Governor John J. Rankin, CMG however, made it clear that direct rule was not off the table, but rather held in reserve.

According to the governor, he will formally assess progress every three months before sending a quarterly update to the Foreign Secretary in the UK and this will continue throughout the full period of CoI implementation, which is estimated to be two years in total.

“If the government of National Unity Government fails to deliver any of the milestones without reasonable justification or assess that progress is being frustrated in any way the UK government and I will take action to protect the interests of people here," Mr Rankin has said.

The UK also put in place “a continuing option” of temporary suspension of the House of Assembly, Ministerial Government and replaced with a temporary governor-led interim administration assisted by an Advisory Council, should the Unity Government fail to implement reform.

According to Bishop Cline; however, that approach may not have been the best in the spirit of partnership between the UK and VI.

“You are not demonstrating mutual respect when you want to come with the threat of dissolving our democratically elected government... suspend our constitution, take our Belongership and give it to all your UK citizens, who are you really rooting for?” Bishop Cline questioned.

It should be noted that the current Prime Minister of the UK, Alexander Boris de Pfeffel Johnson has openly stated in the past that colonialism in Africa should not have ended. His statement has been interpreted by many to be racist.