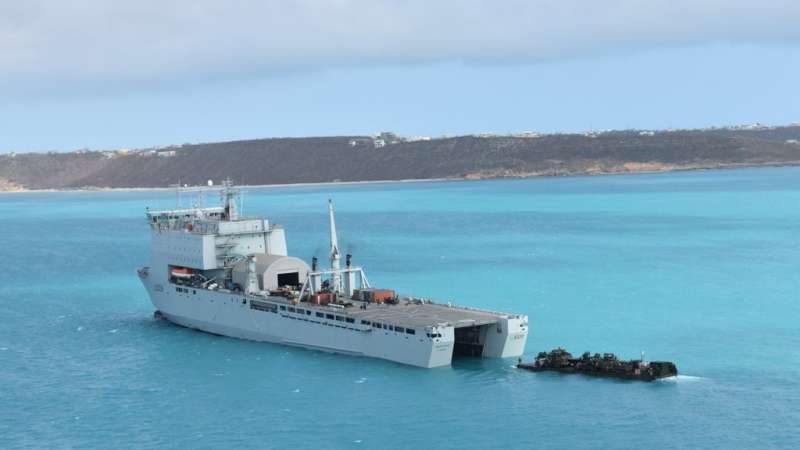 The British Virgin Islands is next in line for the United Kingdom ships –– the RFA Argus and HMS Medway – to conduct hurricane response exercises in the territory.

A government-commissioned release stated that the training exercise would be conducted on Norman Island this coming Sunday and Monday.

The release said similar exercises have been conducted on the Turks & Caicos Islands, Montserrat, and the Cayman Islands in recent times as the peak of the hurricane season draws closer.

“This exercise will ensure that if the territory requires extra help after a storm, the crew onboard RFA Argus and HMS Medway can effectively respond in a way that protects public health and meets our greatest needs. As always, the safety and security of the people of the British Virgin Islands is a top priority,” Deputy to the Governor, David Archer, Jr said.

Meanwhile, Royal Navy Commander Kate Muir and the Head of the UK Task Group, said the ships are well-positioned and prepared to offer support to BVI in the aftermath of a hurricane, if it is needed.

“As with any activity, we become more effective each time we practice, which is why I am grateful to the Governor and the Premier to have this chance to exercise on Norman Island,” Commander Muir said.

Among the scheduled exercises, the task groups will practice their response to any damage that a hurricane could cause, which includes delivering humanitarian aid and disaster relief by landing people and essential supplies ashore in order to support the people of the territory.

Additionally, the ships will be carrying emergency aid from the UK’s Department for International Development including food, water, sanitation products and medical supplies, and equipment, the release added.

Tests to be conducted

Importantly, tests will be conducted on persons who are leaving the ship for COVID-19 by the Task Force’s medical team.

Their samples will then be flown via helicopter to Tortola for testing on Thursday when they are scheduled to enter the territorial waters.

“Once the BVI Health Service Authority has confirmed that all tests are negative for COVID-19 will the team be able to depart the ship. Strict safety measures are in place for the exercise, and the crew has been working closely with the Governor’s Office, the Premier’s Office and the Ministry of Health to ensure full compliance with the Territory’s COVID-19 measures,” it said.

It continued: “During the exercise on Norman Island, the team will be located away from the Bight and areas likely to have visitors and will maintain a strict isolation on the ship and follow social distancing and hygiene practices while on board. The team’s landing on Norman Island will have been isolated at sea for 12 days. On return to the ship, they will conduct a clean down process called Op Dry Out to cleanse each individual, and they will then be monitored for any symptoms in the days following the exercise.”

In April this year, the UK teams conducted surveys to the topography of the territory with a view of being able to deliver relief to the most remote communities, the release added.