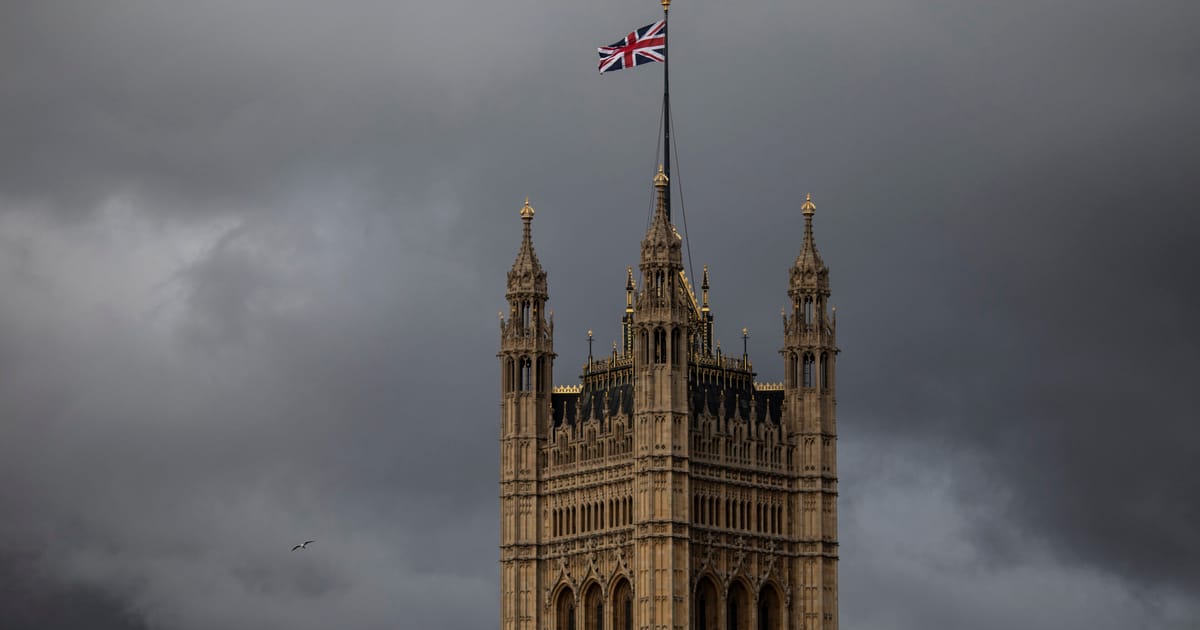 Rishi Sunak promised integrity in politics but some in his party think an electoral loss is needed to clear out unpleasant MPs.
The bad behavior never seems to stop with a ninth U.K. MP now under investigation as Westminster struggles to deal with a wave of abuse claims.

Knight lost the whip after a complaint was made to the Metropolitan Police, a Conservative Party spokeswoman said, while declining to comment on the nature of the allegation. Knight, who has chaired the influential culture select committee since 2020, tweeted that the decision was “wrong and unjustified” and claimed he had been “subject to a campaign of rumor and innuendo.” He has “recused” himself from parliament, and is expected to be replaced as committee chair while the matter is investigated.

McGinn, who has held several roles on Labour’s front bench, said he has not been told of the details of the allegation but was “confident that it is entirely unfounded.”

The ongoing scandal adds to the political pressure on Britain’s latest prime minister, Rishi Sunak. On the campaign trail this summer, Sunak vowed to prioritize integrity but has since been forced to confront a series of misconduct allegations against members of his own party. His own deputy PM, Dominic Raab, is currently under investigation following complaints of bullying, which he denies.

The string of cases is also affecting morale within the party. One female Tory parliamentary candidate said: “We’re all increasingly annoyed that it keeps happening.” She added that there “are quite a few younger Tories — male and female — who think a big loss [at the next election] could actually be the making of the party in terms of getting rid of dead wood, especially the more unpleasant elements.”

The latest suspensions bring the total number of British MPs currently under investigation over their conduct — by the police, party bosses or the parliamentary complaints scheme — to nine, while seven more MPs continue to sit as independents indefinitely after being suspended from their parties.

Knight is the fourth Conservative to be kicked out of the party this year, including former Health Secretary Matt Hancock, who lost the whip after announcing he would take part in the reality TV show “I’m A Celebrity … Get Me Out of Here.”

Former Chief Whip Chris Pincher, who oversaw party discipline, was suspended from the Conservative Party over the summer following allegations of sexual harassment and remains under investigation, as does backbencher David Warburton. An unnamed Conservative MP has been under arrest since May on suspicion of rape and other offenses, but retains the party whip.

Senior Tory MPs have warned the current system is not dealing properly with MPs accused of sexual harassment or assault.

Andrea Leadsom, a former Cabinet minister, said: “It’s concerning to female colleagues that a male colleague could be accused of these things, and it just goes into the ether.”

When she was Commons leader, Leadsom helped set up parliament’s independent complaints system through which staff can report bullying and harassment.

She told POLITICO the scheme was failing because the original plan to set up an HR service alongside it was never fully implemented, meaning the complaints system is “clogged” with lower-level workplace grievances, so victims are reluctant to pursue more serious accusations because it takes so long.

A protocol set up by the Independent Complaints and Grievance Scheme (ICGS), which allows potential criminal behavior to be referred to the police, may never have been used, Leadsom suggested.

She said some female colleagues were “pretty miserable” with the general state of political life, and in particular, the slowness to deal with problems that damage the reputation of all MPs.

Rachel Maclean, Conservative Party vice-chair, insisted procedures for making complaints about MPs had improved in recent years. She told GB News “we have made a lot of progress” and that it was vital to maintain “due process and justice” in ongoing allegations.

A House of Commons spokesperson said they did not accept the ICGS as “failing” and pointed out there is an established HR support service for MPs’ staff.

They added that a range of services are available to staff, including a free and confidential helpline for advice on personal and work-related issues, and that complaints are referred to other bodies where appropriate.
#Dominic Raab  #Raab