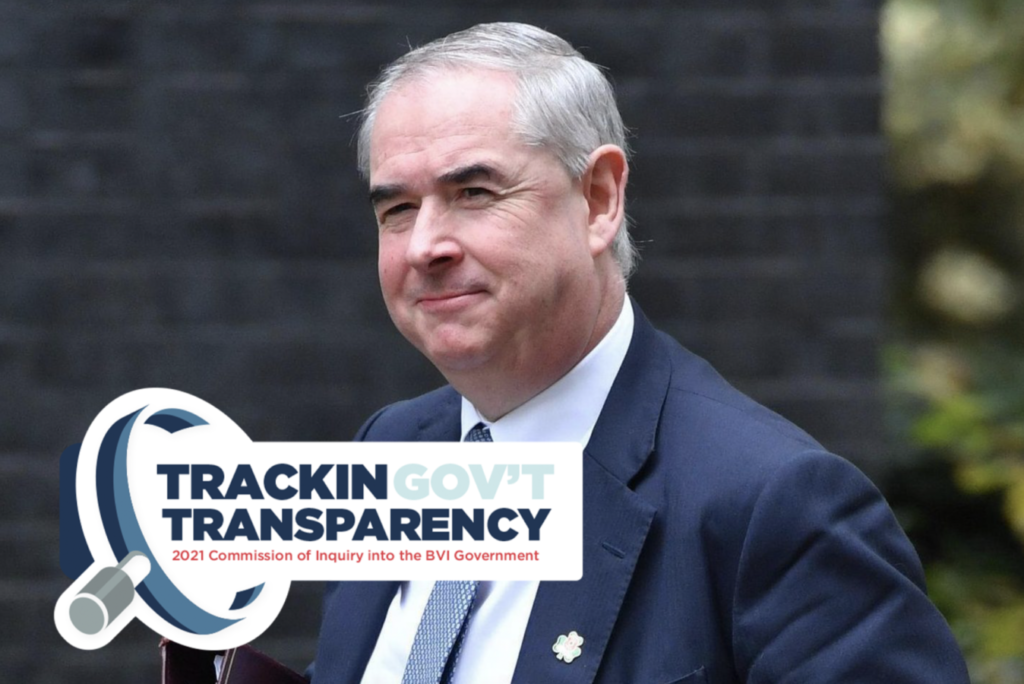 UK should’ve helped BVI with its ‘stillborn’ Register of Interests

Inadequate support from the United Kingdom (UK), a former governor who acted outside of the law, and a ‘misguided’ Registrar are among some of the reasons the government said legislators have been delinquent for years in declaring their interests.

Under the law, all members of the House of Assembly (HOA) are required annually to declare their private businesses and relevant assets into the Register of Interests, which is a record kept of any private interests that could potentially conflict with a members’ public duties.

The government’s arguments about why there has been serial delinquency in making declarations were delivered on Monday (June 21) during submissions from Sir Geoffrey Cox, QC, who is representing them in the ongoing Commission of Inquiry (COI).

While stating that the former Registrar Victoreen Romney-Varlack was diligent in her attempts to chase after legislators for their negligent behaviour, Sir Geoffrey said she appears not to have been given the appropriate advice to enforce the Register of Interests Act (ROIA) and its provisions.

He suggested that the Registrar should have instead sought advice from the Attorney General on how to approach the issue of delinquent members and have it resolved.

He said if the Registrar had submitted a report of their delinquency as she should have, then it would have triggered the oversight committee — run by HOA members — to convene within a period of 21 days.

Had she been given that advice, he said, it would have been judicially enforced for the members to comply with their obligations.

Another claim put forward by Sir Geoffrey was that there appeared to be no preparatory programme in place to educate and train legislators on the importance of an ROIA, and to achieve the cultural change necessary for the Act to be successful.

He argued that the UK had a duty to offer practical and real support to the BVI, including the presence of Commonwealth parliamentary officials whom he felt would have been able to help rectify the flawed legislation.

He said this would have helped to bring about a mindset of compliance on the HOA and the understanding of its need.

“This [House of] Assembly, this territory, this jurisdiction deserved better from the United Kingdom … Of course they (the BVI) are in need of advice and expertise. They have excellent advocates and lawyers but these are matters which this jurisdiction is unfamiliar with. And we (the UK) have a responsibility. That Act (the ROIA) was stillborn,” Sir Geoffrey argued.

According to Sir Geoffrey, the Register of Interests Act (ROIA) adopted a fundamentally flawed design to achieve its purpose, rendering the register – even if it were maintained perfectly and kept fully up to date – practically useless.

He argued that a register that was not a useful tool for democratic purposes, was not likely to be regarded as being a high priority; something he described as a matter of ‘human nature’.

Sir Geoffrey further said statutory obligations are ignored all over the world every day – from speed limits on the road to the submission of tax returns – even though this doesn’t excuse the behaviour.

Sir Geoffrey further pointed out that no member had even ever asked to see the register even though it could only be accessed through one of three methods — payment by an HOA member, a court order, or a criminal investigation. The Act was amended this year to allow for a COI to be given access to the register.

Register of Interests Act stillborn in its design

Since a register can only work or justify its existence if it were an effective democratic tool, and given the fact that the register was not kept up to date, Sir Geoffrey described the Act’s design as being “stillborn”.

Sir Geoffrey also argued that the UK endured a two-decade struggle to perfect its own Register of Interests Act established in 1975.

“For 20 years, that [UK] register was treated with disrespect and disdain in successive parliaments,” said Sir Geoffrey who further stated that the UK legislature didn’t regulate their register till 1995.

“Now if it took 20 years, for the United Kingdom parliament, for the mother of parliaments, to recognise and internalise the need for transparent registration of interests – not because those inside it were dishonourable – but because they found it hard to acclimatise themselves to the new need for transparency and for reassuring the public as to the central principle,” Sir Geoffrey argued.

He surmised that it was unsurprising that it had taken the BVI 13 years to come to terms thus far with its own struggles, even without any form of training, induction or resources invested into the necessary culture change.

The attorney repeatedly made it clear that his arguments are not intended be an excuse for the HOA’s delinquency over the years.