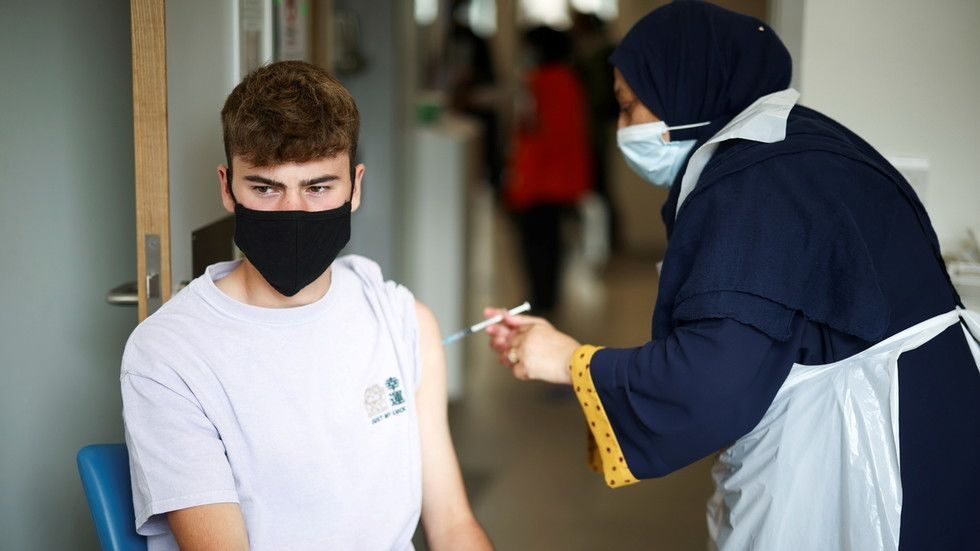 Downing Street will enlist TikTok stars to push teens to get vaccinated, even as critics note that the committee behind the decision to expand the inoculation drive has admitted it had sparse evidence for doing so.

The Joint Committee on Vaccination and Immunisation (JCVI) announced on Thursday that the first dose of the Pfizer Covid vaccine will be offered to all 16- and 17-year-olds without needing the consent of their parents, reversing its own recommendation from just two weeks ago.

The independent panel of experts, which advises the UK government on immunisation, had earlier said that the jab should not be given to minors unless they were over 12 and suffered from medical conditions that would make them vulnerable to Covid-19, or lived with someone deemed high-risk. JCVI said it will issue a recommendation about when the second dose should be administered at a later date.

The NHS is now gearing up to give the shot to about 1.4 million children. To help with the effort, the government plans to assemble an army of Instagram and TikTok stars, as well as a fleet of ‘vaccine buses’ to drum up enthusiasm for the jab and make it easy for teens to get, iNews reported.

The kid-friendly approach to promoting the Pfizer jab comes after social media observers highlighted the fact that JCVI chair Wei Shen Lim sent mixed signals about how the decision to offer the jab to teens was made.

During a press briefing on Thursday announcing the policy, Lim said his committee decided to reverse its recommendation after “carefully considering the latest data.”

But he appeared to back-pedal after a journalist asked if the committee would be publishing “the evidence” used in making its decision to allow 16- and 17-year olds to get the shot, in order to help reassure parents. Lim responded by stating that there was currently no evidence available to share with the public.

"The intention is for all the evidence to be published. The evidence isn’t necessarily in the hands of JCVI. We have spoken to academic partners and to other people in other countries as well. So wherever possible we encourage that the evidence is published, but the timing is not in our hands."

The committee’s attempt to explain its decision led to head-scratching from the media. Sarah Knapton, the Science Editor at The Daily Telegraph, said that after sitting through two press briefings, “I'm none the wiser about why JCVI has changed their advice. Not convinced they know either.”

Others pointed to what appears to be a rather straightforward conflict of interest. While the JCVI claims to be an independent body, Professor Wei Shen Lim is part of a department at the British Thoracic Society that received more than £25,000 ($34,760) in funding from Pfizer. Lim declared the “departmental interests” in a 2021 audit, which stated that he had “direct responsibility” over the Pfizer-gifted funds. The British Thoracic Society is a charity that aims to improve treatments for respiratory and associated disorders.

Governments around the world have urged people of all ages to get vaccinated, claiming that the more transmissible Delta variant may pose a greater risk. However, the disease has had a negligible effect on mortality among children. In the first 12 months of the pandemic, NHS data shows only 25 under-18s died from the illness.