Ukraine war: Zelenskyy admits it's 'impossible' to completely force Russia out of country - amid fears of Korea-style split

In its latest intelligence update, the MoD said local counterattacks have hampered Russian attempts to reorganise its forces, amid fears Chernihiv could become the next Mariupol.

President Volodymyr Zelenskyy has admitted it would be "impossible" to completely force Russian forces out of Ukraine, amid fears Vladimir Putin is seeking a Korea-style split.

The head of military intelligence in Kyiv said the Kremlin wanted to split the country like "North and South Korea", securing itself a region controlled from Moscow after failing in its bid for a complete takeover.

Speaking hours later, Mr Zelenskyy appeared to acknowledge his government would have to concede territory.

He said attempting to completely force Russia out "would lead to a Third World War".

Mr Zelenskyy said he was seeking a "compromise" with Moscow over Donbas, the region which has been partly controlled by Russian-backed separatist groups since 2014.

It's been suggested that the Kremlin wants to hold "referendums" in such areas to determine whether the people living there want to be part of Russia.

But Mr Zelenskyy wants Russian troops out of parts of the country they've occupied since last month's full invasion, saying a deal is "only possible" if they are withdrawn. 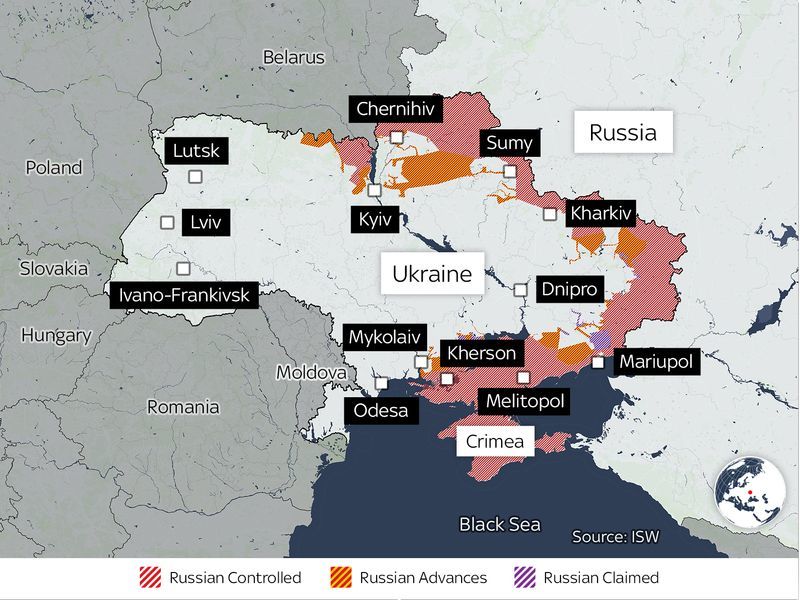 Despite reports of continued shelling, Russia's advance appears to have stalled

Elsewhere, Emmanuel Macron has distanced himself from Joe Biden after the US president said Vladimir Putin "cannot remain in power".

In a powerful speech in Poland on Saturday evening, Mr Biden said stopping the war in Ukraine is "the task of our time" as he appeared to call for his Russian counterpart to be replaced.

The White House later denied he was calling for regime change, and a Kremlin spokesman responded by saying "that's not for Biden to decide".

Speaking on France-3 television on Sunday, Mr Macron said: "I wouldn't use those terms, because I continue to speak to President Putin, because what we want to do collectively is that we want to stop the war Russia launched in Ukraine, without waging war and without an escalation."

The French president also stressed that the US remains an important ally, but added: "We share many common values, but those who live next to Russia are the Europeans."

'Guerrilla warfare' to be launched against Russian forces

In remarks released by the Defense Ministry, he said Putin realised "he can't swallow the entire country" and would likely try to split the country under "the Korean scenario".

Mr Budanov added: "The occupiers will try to pull the occupied territories into a single quasi-state structure and pit it against independent Ukraine."

He cited Russian attempts to set up parallel governments in occupied cities and attempts to bar people from using the Ukrainian currency, the hryvnia.

A separatist leader in eastern Ukraine said his region wants to hold a vote on joining Russia.

Leonid Pasechnik, the head of the self-proclaimed Luhansk People's Republic, said it could hold a referendum "in the nearest time" asking voters whether they support making the region a part of Russia.

Russia has supported separatist rebels in the region, and nearby Donetsk, since an insurgency erupted there in 2014 following the annexation of Crimea.

A spokesperson for the Ukraine foreign ministry said all "fake" referendums held by Russia in occupied territories will have no legal basis.

It follows the latest intelligence update from the UK's Ministry of Defence which said the battlefield in northern Ukraine remains "largely static" but Russian troops are concentrating efforts on the "encirclement" of Ukrainian forces in the east.

The MoD said local counterattacks have hampered Russian attempts to reorganise its forces.

There are fears Chernihiv, in the north, could become the next Mariupol, with 44 severely wounded people - including three children - unable to be evacuated for treatment, the city's mayor has said.

The city has been cut off by Russian forces.

Lviv, in the west, has also come under fire, with Putin's forces striking a fuel depot with high-precision cruise missiles.

Meanwhile, two humanitarian corridors have been agreed for Sunday, according to Ukraine's deputy prime minister.

Minister Iryna Vereshchuk said the corridors, used to evacuate civilians from frontline areas, will run from the Luhansk and Donetsk regions and include people leaving Mariupol in private cars.

Sanctions could be lifted if invasion ends

The foreign secretary has said sanctions against oligarchs, banks and businesses could be lifted if Russia ends its invasion of Ukraine.

Speaking to the Sunday Telegraph, Liz Truss said "snapback sanctions" would be retained if the Russian president did attack again.

Ms Truss said a "negotiations unit" had been established in the Foreign Office to aid possible peace talks.

As Kremlin troops continue to struggle, her comments could be seen as an incentive for Vladimir Putin to cut his losses and agree a deal with Ukraine.

Her comments mirror those made by US secretary of state Antony Blinken, who said travel bans and asset freezes are "not designed to be permanent".

Nadhim Zahawi told Sophy Ridge on Sunday the "Russian military has miscalculated" its invasion of Ukraine.

"The Ukrainians have fought like lions," he said. "They've defended their country. They believe in their freedom."