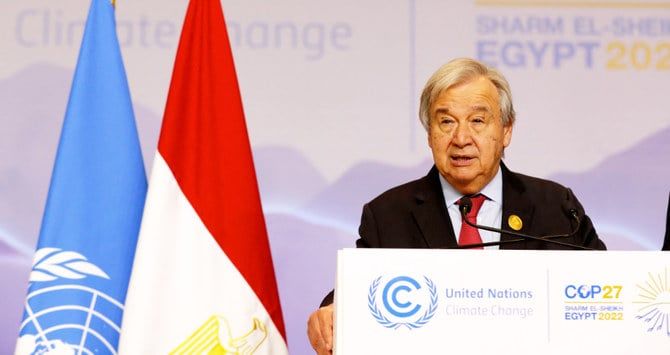 UN chief Antonio Guterres urged rich and developing nations to stop the “finger pointing” at deadlocked climate talks on Thursday and reach a deal on covering the losses suffered by vulnerable countries battered by weather disasters.
With the two-week COP27 conference in Egypt officially due to wrap up on Friday, negotiators faced a long night as they scrambled to find a compromise over the contentious issue of “loss and damage” and prevent the talks from collapsing.

Guterres said there was “clearly a breakdown in trust” between developed and emerging economies, adding that the most effective way to build confidence would be to find an “ambitious and credible agreement” on loss and damage and financial support for vulnerable countries.

“This is no time for finger pointing. The blame game is a recipe for mutually assured destruction,” he said, after flying back to Egypt from Bali where he had attended a G20 leaders meeting.

“The time for talking on loss and damage finance is over — we need action.”

Developing nations least responsible for global emissions are pushing rich polluters to agree at COP27 on the creation of a fund to compensate countries facing huge losses from climate impacts.

After dragging their feet over loss and damage over concerns it would leave rich nations legally exposed to open-ended demands for compensation, the
United States and European Union somewhat softened their position by agreeing to discuss the issue at COP27.

Hours after Guterres’s intervention, Sameh Shoukry, the COP27 president, urged delegates to approach the last hours of talks with “urgency.”

“We are not where we need to be in order to close this conference with tangible and robust outcomes,” he said at a session late Thursday.

European Commission Vice President Frans Timmermans proposed the establishment of a “loss and damage response fund for the most vulnerable countries” as a compromise.

But he also said that the funding should come from a “broad donor base” — code for China, the world’s top polluter and second biggest economy, to participate.

An earlier proposal from China and some 130 developing nations — known as G77+China — limits the donor base to a list of two-dozen rich nations drawn up in 1992.

Timmermans has said that countries such as China, which were poorer 30 years ago, should not be left “off the hook” now that they have grown wealthier.

The G77+China proposal also says the fund would be used to assist “developing nations” in broader terms than the EU’s proposal.

“For us, the success of COP27 depends on what we get on loss and damage,” G77+China lead negotiator Nabeel Munir of Pakistan said after Timmermans spoke.

The United States, the world’s second biggest carbon emitter, did not address the open meeting while a Chinese representative did not directly mention loss and damage in his intervention.

A draft text published later on the COP27 website included some of the language in both proposals, without going into details into who would have to pay into the fund.

Earlier, Ralph Regenvanu, minister of climate change for the Pacific island of Vanuatu, warned that walking out of the talks “was discussed as an option” if developing nations come away empty handed.

Protests held within the conference compound have sought to keep up the pressure on delegates, with small but vocal crowds of demonstrators chanting:

“What do we want? Climate justice!“

The deadlock on loss and damage is holding up agreement on a broad range of issues that nations are hoping to address at COP27.

Developed countries want countries to reaffirm their commitment to meeting the aspirational goal of limiting global warming to 1.5 degrees Celsius — a tough target as CO2 emissions are expected to hit an all-time high this year.

Timmermans said that for the EU, the 1.5C target and loss and damage “are two sides of the same coin.”

“We sincerely hope that by this offer that we are making tonight, we can bring parties closer together because we believe it is urgent that we show to all our constituents that we want this COP to succeed,” he said.

Developing nations have also sought assurances at COP27 that rich countries will finally fulfil promises to provide $100 billion a year to help them green their economies and adapt to future impacts.

“The parties at COP27 have a chance to make a difference — here and now. I urge them to act — and act quickly.”