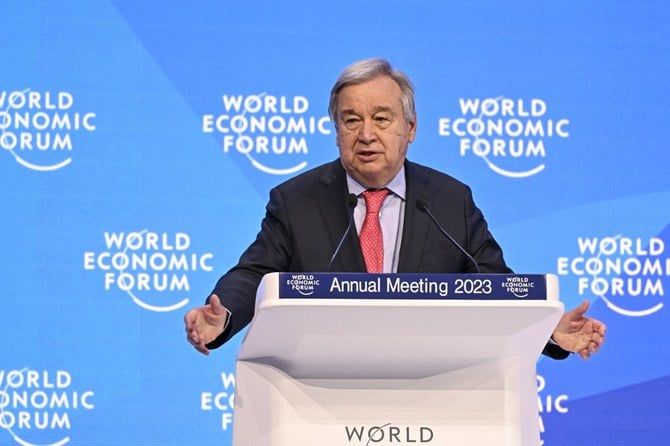 The UN Secretary General has said the planet is in a “sorry state” with problems “piling up like cars in a chain-reaction crash” as he cast a gloomy picture at the World Economic Forum in Davos.
Antonio Guterres said the parlous state was a result of interlinked problems such as the Russia-Ukraine war and a global economic slowdown that had no easy solutions.

He singled out climate change as an “existential challenge,” and said a global commitment to limit the Earth’s temperature rise to 1.5 degrees Celsius was “nearly going up in smoke.”

And he accused oil firms of peddling a “big lie,” pointing to what he described as their role in global warming and he demanded they be held accountable.

“We learned last week that certain fossil fuel producers were fully aware in the 1970s that their core product was baking our planet,” Guterres said.

He was referring to a study published in the journal Science which showed that ExxonMobil scientists had modeled and predicted global warming “with shocking accuracy” decades ago. The company did not act on the study.

Guterres said that in 1998, US states won a landmark settlement against tobacco companies worth $246 billion aimed at recovering the costs of health treatment for smokers.

The world is “plagued” with widening inequality, a cost-of-living crisis sparked by soaring inflation, high interest rates and an energy crunch, lingering effects of the COVID-19 pandemic, supply-chain disruptions and more.

He said that the US and China needed to work more closely on climate, trade, technology and human rights to prevent confrontation.

“We risk what I have called a great fracture, the decoupling of the world’s two largest economies,” he said, adding: “This is the last thing we need.”

Guterres also said the world had failed to learn the lessons from COVID-19. “We are nowhere near ready for pandemics to come,” he said.
#COVID-19  #Covid