Hon Malone was a guest on the August 11, 2022, episode of ‘The Narrative’ talk show with host Calistra Farrier on the VI and other current matters in the territory.

When asked about the state of politics in the VI, Hon Malone said, “Right now it's been clouded with this Commission of Inquiry because, at the end of the day, you will recall that after the events of April 28 within a five day [period], whether it's questionable or not, we were able to… form a coup, for lack of a better word.”

As such, he said the VI moved from a “Change of government elected by the people” to one selected, which resulted in a coalition government that came without the people ever going to the polls. 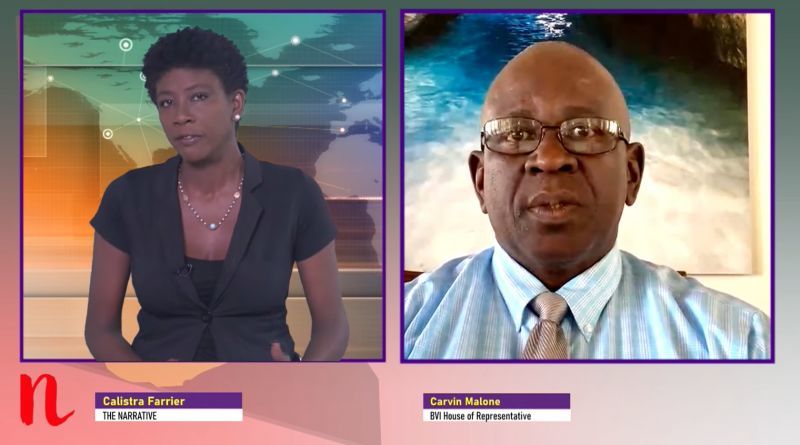 Hon Malone was the guest on the August 11, 2022, episode of ‘The Narrative’ talkshow with host Calistra Farrier on the BVI and other current matters in the territory.

Other members include the previous Opposition Leader as the new Minister for Health and Social Development in the person of Hon Marlon A. Penn (R8); Minister for Natural Resources and Labour, Hon Melvin M. Turnbull (R2) and Junior Minister for Trade and Economic Development, Hon Shereen D. Flax-Charles (AL).

Dr Wheatley has said the elected political party members met and agreed to propose a national unity government to Governor John J. Rankin and said that different political parties would be represented in Cabinet as this would give the best political representation as a government that will be working closely with the governor and the United Kingdom on reforms.

Virgin Islands News Online (VINO) has reached out to Premier Dr Wheatley for his response to the formation of his Government of National Unity being described as a coup by Hon Malone; however, no response was received up to publication time.

The former Opposition Leader Hon Penn; however, has said the National Unity Government was only expected to last for 10 to 12 months ahead of the 2023 constitutionally due elections.