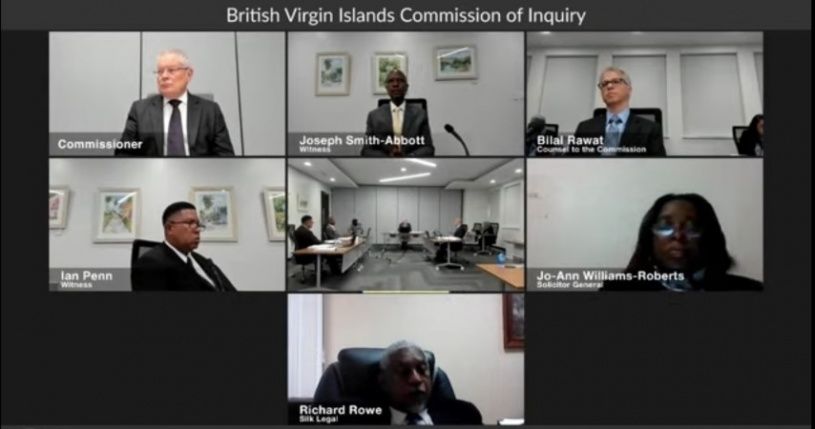 Commissioner of the Commission of Inquiry (CoI) Sir Gary Hickinbottom has described as unfortunate and unlawful that the Government of the Virgin Islands has an unpublished policy regarding belongerhship that is contrary to the legislation.
Commissioner Hickinbottom made his displeasure known earlier today, September 28, during the live streaming of the CoI’s proceedings where Permanent Secretary in the Ministry of Natural Resources, Labour and Immigration Mr. Joseph Smith-Abbott and Chief Immigration Officer Mr. Ian Penn were giving testimony.

He said: “In terms of policy outside the [ Immigration & Passport] Act, one policy that is until the 20th anniversary of arriving in the territory, residents in the territory, their application won’t actually be considered. That’s the only policy outside the Act. I’ve received some legal submissions on whether that policy is unlawful; we didn’t go into that, but it is extremely unfortunate, isn’t it that the only policy was not publicized and therefore applicants who would have put in their applications after 10 years didn’t know that they would be put on a shelf for 10 years. That seem to me to be very unfortunate…it’s not ideal.”

Mr. Smith-Abbott said he agreed that it was an unfortunate situation.

“Yes I think the potential unlawfulness consideration, this is in the context of consideration whether there is an expectation that after 10 years at least I can reasonably be considered for belongership and yes I am aware of that submission. So, to the extent to which it is unfortunate as you characterized it, it is unfortunate that a much longer period has been imposed for consideration and necessarily grant, which is totally separate and distinct. It is unfortunate," the PS stated.

Commissioner Hickinbottom further said: “Generally speaking as a proposition of public law, if the state or the government has a policy which they apply, which is not published, that’s unlawful, and here there is a policy, it appears is arguable that is contrary to the statue, but it is an unpublished policy. Certainly strongly arguable that it is unlawful, but it just seem to me to be very unfortunate because people been making applications after 10 years.”

Hearing the exchange, Counsel to the CoI Mr. Bilal Rawat, asked whether any of the witnesses believed that this policy has contributed to a backlog at the Immigration Department.

Chief Immigration Officer Penn said this was not the case and attempted to defend the government’s decision to have the policy unpublished.

“No I don’t think so, but what I would like to say here is that even if the Act would state seven or 10 years, and the guidance talks about 20 [years], although it wasn’t published, we are a small community and persons would get a hold of what is happening in the Immigration [department] because a number of persons would probably inquire and the word or the message would spread in the community.”

He added: “So at this stage, the population knows that when submitting applications they have to submit it at the 20th anniversary. Not saying that it is correct; you talk about it being published, we have no record of it being published, however, we have been carrying out this policy in that light, and I can say for now we do not have such a backlog per se.”
#Commission of Inquiry  #the Virgin Islands  #Hickinbottom  #CoI