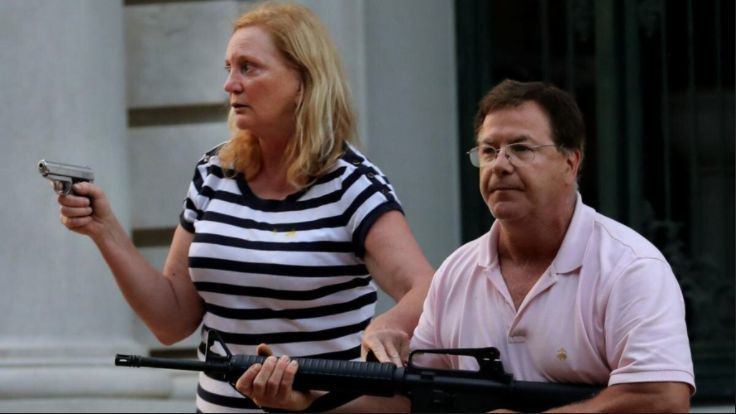 A US couple who gained nationwide notoriety after they pointed guns at Black Lives Matter protesters last year have been pardoned.
Mark and Patricia McCloskey were filmed holding weapons outside their home in St Louis, Missouri.

They were fined after pleading guilty to misdemeanour charges this year.

But Missouri's Republican Governor Mike Parson has now pardoned them, something he had promised after US conservatives began to support the couple.

The pair, both lawyers, appeared briefly at last year's Republican National Convention, and Mr McCloskey has announced plans to run for a US Senate seat in Missouri.

"When the angry mob came to destroy my house and kill my family, I took a stand against them," he reportedly said in a recent campaign video. "I will never back down."

The incident took place on 28 June 2020 amid nationwide demonstrations following the murder of George Floyd. Police officer Derek Chauvin knelt on his neck for nine minutes, and has been sentenced to over 22 years in prison.

The two became a symbol of US divisions over the protests, with Democrats harshly criticising them and Republicans praising the lawyers.

The pair were quickly charged. A complaint issued by St Louis Circuit Attorney Kim Gardner said both had displayed their semi-automatic weapons "readily capable of lethal use, in an angry or threatening manner".

But at the start of their legal case Governor Parson had vowed to pardon them if convicted. On Tuesday his office issued a press release confirming he had stuck to his promise.