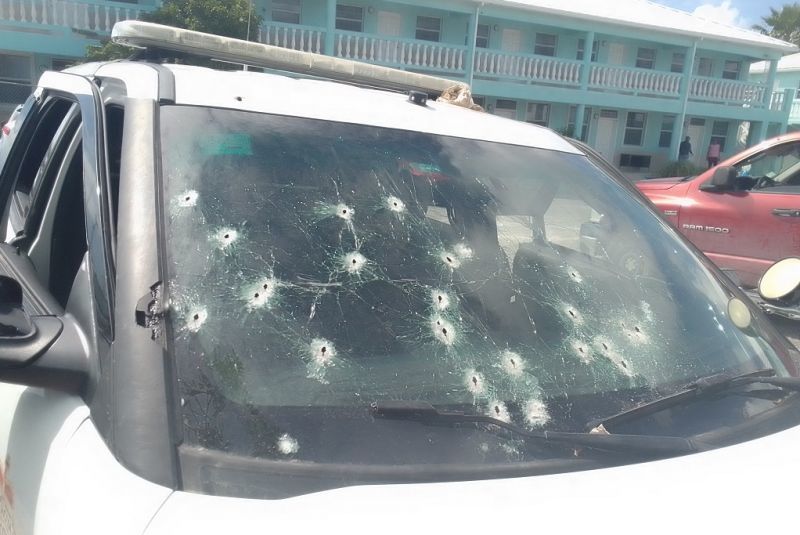 He said around 6 pm on Sunday the first targeted attack occurred on a vehicle containing staff of a local business and two tourists being transported back to their accommodation after an excursion on Long Bay road - committed by armed criminals in a vehicle.

The criminals indiscriminately shot into the vehicle transporting the employees and the tourists. As a result of this attack two persons were murdered, one from the local business and the other a tourist from the United States.

Three other persons were injured including the other visitor to the Turks and Caicos.

The next incident involved a police patrol car of the Royal Turks and Caicos Tactical Unit which intercepted a vehicle used by the criminals in the first attack.

Based on information received from the Command Centre the suspected vehicle was followed and tried to evade law enforcement. The criminals started shooting in the direction of the police officers with automatic weapons.

Commissioner Botting said despite being under fire from automatic weapons, two officers returned fire to protect themselves and their colleagues.

One officer received a serious injury from a gunshot wound. The Commissioner of Police expressed pride in the officers for standing their ground.

Based on injuries sustained throughout the shooting, and the condition of the police vehicle, the vehicle containing the criminals escaped and the officers immediately sought medical help for their seriously injured colleague.

The third incident saw a man representing himself at the hospital with a head injury. It is believed he was struck by shots discharged by the criminals in their confrontation with the police officers.

A fourth incident is being actively investigated. A report of an unidentified male body in Dockyard. The Police Commissioner said while subject to confirmation, police believe him to be one of the armed attackers who shot at police officers during the attack on the police vehicle.

Police Commissioner Trevor Botting condemned the explosion of violence on Sunday evening which he said was perpetrated by reckless armed criminals.

He believes the original attack was targeted and carried out by armed gang members who acted without conscious, who had no regard for life and were hell-bent on causing indiscriminate harm and misery across the Turks and Caicos Islands.

The Top Cop reported the violence is linked to drug supply and issued by revenge, turf wars and retribution.

He said gangs must not be allowed to destabilise the Turks and Caicos Islands.

Botting said the police force knows people are frightened by the levels of violence on the TCI over the past few months, however, he said police officers are not cowed by the violence or violent criminals.

The Royal Turks and Caicos Islands Police Force expect substantial support to be arriving in the TCI from across the region and the UK.

Botting said support will be in the shape of armed officers and investigators to assist the Royal Turks and Caicos Islands Police Force deal with the current threats.

The Police Commissioner added that he is grateful to the TCI and UK governments for their support and the government and Commissioner of Police of the Royal Bahamas Police Force for their solidarity and support.