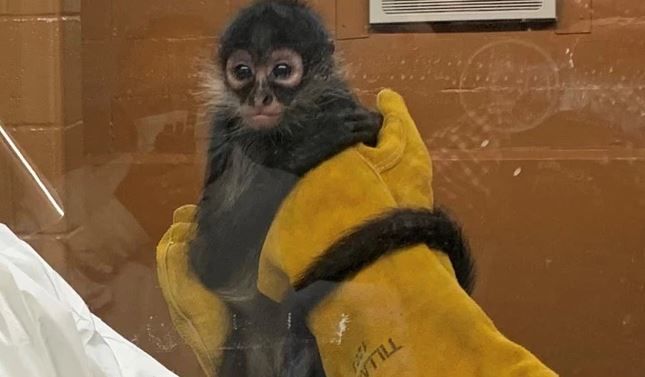 The woman while entering the borders told the police officials that the wooden box in her car was filled with beer she had bought from Mexico.
A woman from Texas was arrested for illegally smuggling an endangered spider monkey into the United States. The 20-year-old woman attempted to enter US from Mexico through the Gateway International Bridge in Brownsville, Texas, on March 21. Savannah Nicole Valdez pleaded guilty to smuggling wildlife into the United States without first declaring and invoicing it and fleeing an immigration checkpoint, according to a news release from US Immigration and Customs Enforcement.

The woman while entering the borders told the police officials that the wooden box in her car was filled with beer she had bought from Mexico, but it was the spider monkey that she was planning to sell. The official opened the box and found a live spider monkey, she was later referred to secondary inspection. The woman, however, refused to comply with their instructions and instead sped off, running a traffic light and nearly colliding with officers and other vehicles. Later that day, agents found multiple online postings advertising the sale of the spider monkey in the Katy and Houston areas with Valdez's phone number listed in the advertisements, the release said.

On March 28, the woman turned herself in. The release says that the woman admitted to knowingly importing the monkey despite not declaring it and intentionally fleeing from law enforcement.

The endangered spider monkey was recovered and sent to an animal shelter in Central Florida.

The 20-year-old woman will be sentenced on January 25,2023, according to the release. "Smuggling in endangered species for commercial gain is a tragic crime against nature's precious resources," said Craig Larrabee, Acting Special Agent in Charge, HSI San Antonio in the release. "HSI takes every opportunity to join our federal, private sector and international partners to share our knowledge, experience and investigative techniques designed to protect and preserve threatened and endangered species."