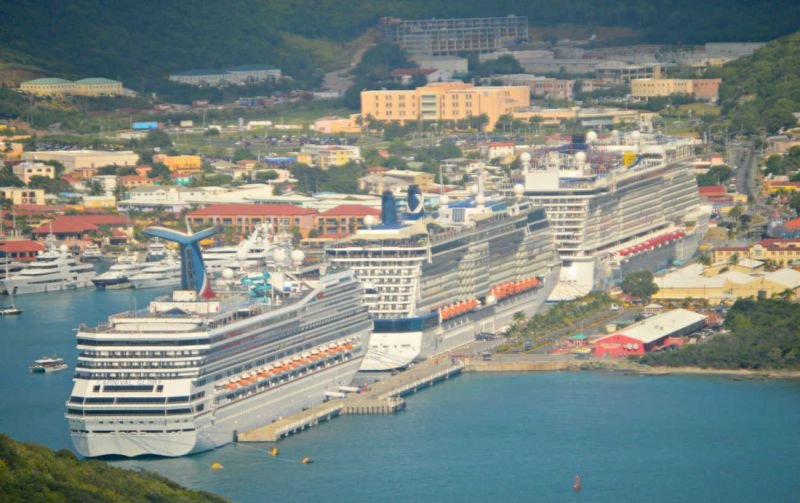 St Thomas, USVI- US Virgin Islands (USVI) residents, especially those in St Thomas, may soon see cruise ships at ports of call again, as the once bustling cruise tourism operation that sustained many livelihoods on the island see some revival in the next few months.

During a West Indian Company Board of Directors meeting held Thursday, October 15, 2020, Interim President and CEO, and Director of Property Management Anthony Ottley told those in attendance that the Virgin Islands could see the return of cruise ships to WICO as early as January 2021.

The cruise industry came to a standstill early this year after countries started issuing no-sail orders as a result of the Covid-19 pandemic. This has not only led to the over 300 cruise ships around the world be docked indefinitely; but also created an unstable environment since timelines for the resumption of services remain fluid.

No cruise ships expected for remainder of year

The Center for Disease Control and Prevention last month extended its no-sail order to October 31, 2020, but none of the major cruise lines have committed to sailing on November 1, 2020. Norwegian Cruise Line and Royal Caribbean extended their self-imposed no-sail policy through the end of November, with no commitment to resume sailing in December.

However, Carnival Cruise Line — the world's largest cruise company — has submitted its sailing schedule, which covers the period from January 2020 to April 30, 2022. To that end, WICO has been making preparations to reopen and is seeking confirmation from other cruise lines relative to their resumption schedule and policy.

"Conversations have been moving pretty rapidly over the past couple of weeks with the cruise lines, at least from my position in tourism," said WICO Board Chairman Joseph Boschulte, who also serves as the commissioner of the Dept. of Tourism.

Mr Ottley said, "In reviewing the request on schedule submitted, all show intent to start sailing in January 2021. Our final consolidated schedule has 150 WICO calls for the period starting from January 2 to September 23, 2021. However, WICO has not received any commitment for sailing to the territory from any cruise line before January 2021."

Mr Ottley told the board that in preparation to welcome ships back into the territory, WICO's marine staff has been conducting maintenance on the overall marine infrastructure, anticorrosion chipping, and the painting of steel components on hardware.

WICO board member Edward Thomas called for a motion to officially reopen the port that would supersede a March motion that instituted the port's closure. Mr Boschulte agreed the new resolution was a good idea, however he sought confirmation on protocols WICO had in place that would keep both tourists and residents safe.

In response, Mr Ottley said, "Particularly at WICO we have ordered PPE safety devices and masks, along with face shields, and we are looking at retrofitting the gates and booths so that we can have plexiglass up so that when the ships come back, we will have the least amount of physical engagement with them at the gates as possible." Mr Ottley also informed board members of a meeting scheduled for Friday between himself and V.I. Port Authority Executive Director Carlton Dowe, to discuss port reopening matters. VIPA manages the Crown Bay Port in St Thomas and the Ann E. Abramson Marine Facility in Frederiksted.

It must be noted that both WICO and the [US] VI Port Authority will need approval from the [US]VI Department of Health before being cleared to accept cruise ships.

Protocols to be finalised

WICO has provided the Department of Health with preliminary protocols which were presented by Norwegian and Royal Caribbean as a starting point to have discussions on the expectations of the cruise lines when they do come to the port. Mr Ottley said those protocols had not been finalised as official.

When questioned by board member Enrique Rodriguez on whether WICO has its own protocols for reopening the port, Mr Ottley confirmed that preliminary protocols were indeed in place pending any additional measures the ships may require.

"We are pretty much ready for the ships to return, but as I mentioned, we don't anticipate any ships coming for November, and it's still a bit up in the air for December. But we do feel confident that we should be seeing some sort of action in January," said Mr Ottely.

Mr Edward's motion to officially reopen WICO's port effective December 1, 2020, with all the appropriate protocols in place, was favorably voted on pending final reports from WICO's meeting with Mr Dowe and the Department of Health.