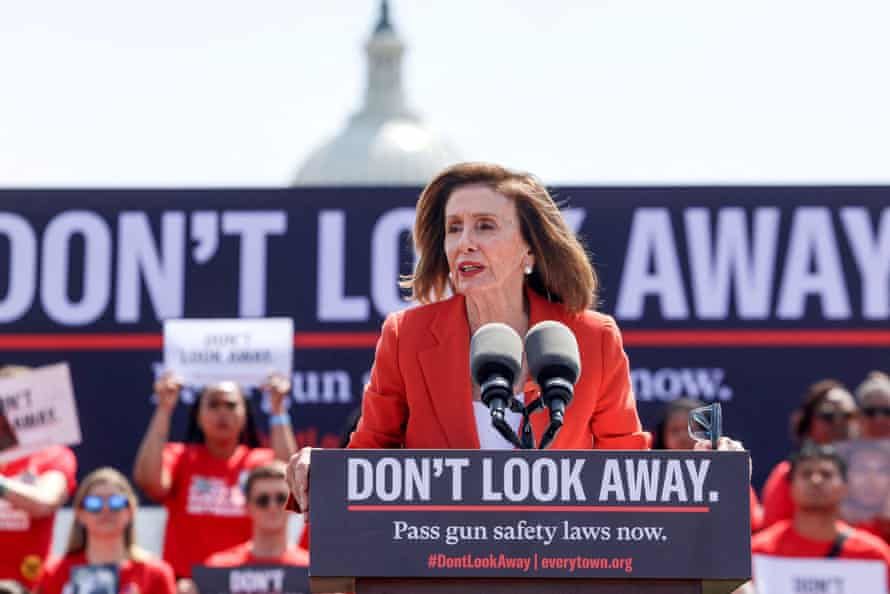 The US House of Representatives has voted through a series of measures regulating the sale of guns, but which are destined to fail in the Senate.

The new measures would bar sales of semiautomatic weapons to people under 21 and ban large-capacity magazines.

But Republican opposition in the Senate means the bill has little chance of entering law, despite a renewed focus on gun control in the wake of a series of mass shootings in the US.

Hours before the vote, survivors of the Uvalde school shooting gave emotional testimony to lawmakers which reduced some to tears.

The primary school shooting in the Texan city claimed the lives of 21 people, including 19 young children.

One 11-year-old girl told the hearing - in pre-recorded testimony - that she had smeared her classmate's blood on herself to play dead, and graphically described the moment the gunman shot her teacher in the head.

The Uvalde attack and other recent mass killings have sparked a new round of bipartisan talks on gun control in the US Senate, but Democrats need at least 10 Republicans on board to pass any new laws.

Conservatives want to protect the constitutional right to bear arms and object to limiting sales of the assault-style rifles used in the Uvalde shooting.

And while a group of Republican and Democratic senators are trying to find common ground, correspondents say that whatever they come up with is very unlikely to involve any sweeping reforms.

On Thursday, more than 220 CEOs of major companies - including Levi Strauss & Co, Lululemon and Lyft - called on the Senate "take immediate action" to reduce gun violence following the recent spate of shooting deaths.

"Taken together, the gun violence epidemic represents a public health crisis that continues to devastate communities - especially Black and Brown communities - and harm our national economy," the business leaders wrote.

Adding further pressure to lawmakers, major Republican donors joined other conservative Texans in signing an open letter pushing for gun control. The letter is expected to run as a full-page ad in the Dallas Morning News on Sunday and will support expanding background checks and raising the age to purchase a gun to 21.

In the House of Representatives, Wednesday's wide-ranging package of legislation, called the "Protecting Our Kids Act" by lawmakers, passed by 223-204 votes with just five Republicans joining Democrats in supporting the bill.

In addition to tighter controls around the sale of guns, it would also introduce a scheme allowing local government to compensate individuals who surrender high capacity magazine and strengthen existing regulations on bump stocks and untraceable ghost guns.

However the measures cannot pass into law without approval in the Senate.

But House Republicans claimed the bill was an attack on citizens' constitutional rights to own a firearm.

"The speaker started by saying this bill is about protecting our kids," Ohio Republican Jim Jordan said. "But this bill doesn't do it. What this bill does is take away second amendment rights, God-given rights, protected by our Constitution from law-abiding American citizens."

Bipartisan negotiations are ongoing in the Senate on more moderate measures that could gain the support of enough Republicans to pass the 60-vote threshold required in the chamber. Senate Majority Leader Chuck Schumer said on Thursday that the talks were making progress.

But one senior Republican, Texas Senator John Cornyn, warned on Wednesday that there are "sticking points everywhere".

Only a handful of the 50 Republican senators appear open to new gun legislation, with Democrats seeking narrower measures as a compromise. Senators are expected to reach a final agreement by the end of the week.

Proposals with the greatest public support include a "red flag" law that would prevent individuals with mental illness or a criminal history from purchasing firearms, and expanded background checks on gun purchasers that would include private gun sales.

'I don't want it to happen again' - Uvalde survivor
Matthew McConaughey: 'This should be a nonpartisan issue'