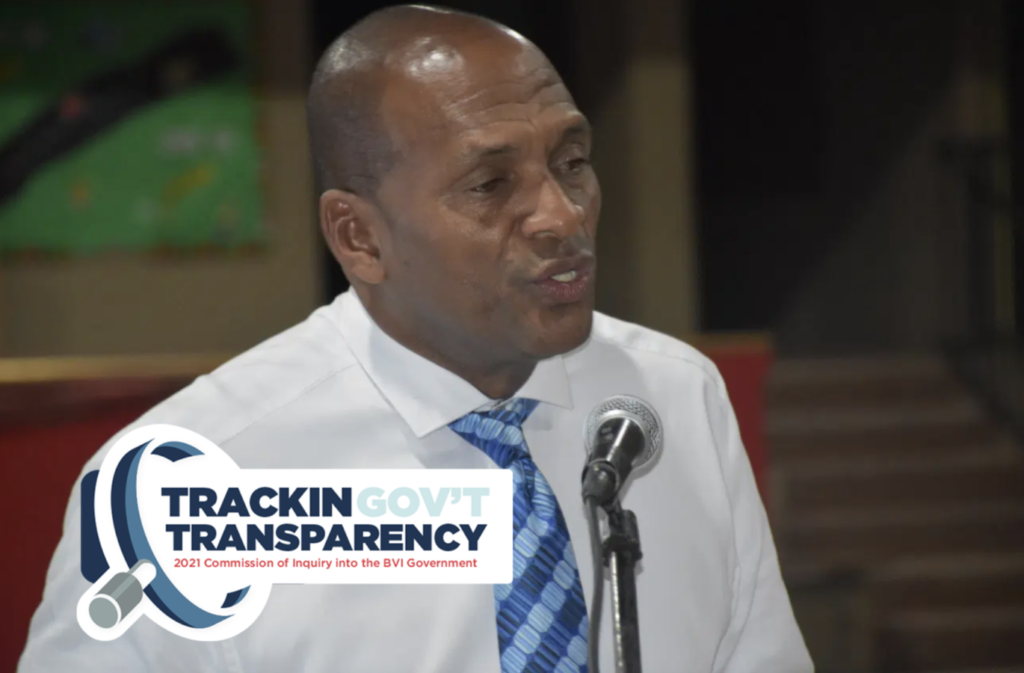 Fourth District Representative and former minister in the previous NDP administration, Mark Vanterpool did not file any declarations of interest for up to six years during a period while he was in government.

All member of the House of Assembly (HOA) are required annually to declare their private business, properties, and relevant assets into the Register of Interests, which is essentially a record kept of any private interests that may conflict or may be perceived to conflict with their public duties.

Vanterpool confirmed his more than half-decade-long delinquency to make declarations when he appeared before the ongoing Commission of Inquiry (COI) last Friday.

The legislator who served in the House of Assembly (HOA) at the time the Register of Interest Act came into force in 2008, also served previously as the first head of the Standing Select Committee (SSC) responsible for oversight of the register of interests in HOA in 2016.

The committee reportedly only met once in 2017 after its establishment and during Vanterpool’s tenure as the head.

Vanterpool acknowledged that a conflict of interest could be seen in his chairmanship of the SSC and his habitual non-compliance with his obligations regarding the Register of Interests Act.

A section at the end of a report that former Registrar, Victoreen Romney-Varlack prepared for the former Governor, Augustus Jaspert, said: “The Honourable Mark Vanterpool did not file a single declaration for the period 2011-2018.

Vanterpool corrected the record to show that he did indeed file a declaration for 2017 and the legislator was only late in making declarations after 2016. Further to this, he volunteered to tell the COI he inadvertently neglected to declare two of the businesses he owned during the times he actually made declarations.

The legislator also confirmed that he received reminder letters from the former Registrar to file his declarations on time.

Leading up to his hearing on Friday, the COI had asked Vanterpool through a questionnaire whether he ever failed at any time to comply with his obligations in making declarations of interest. The document also asked for a full explanation of why he did not make a declaration if that was the case.

However, it was brought to his attention on Friday that those questions went entirely unanswered in the document with the responses he submitted to the COI.

Vanterpool instead chose to enclose copies of previous submissions he filed with the Registrar as his response to the questions.

“Why didn’t you disclose that for six years, you had not even filed a single declaration?” COI attorney Bilal Rawat asked the Opposition legislator.

Vanterpool, in response said: “Commissioner, I would not try to defend anything or try to make an excuse. It was not done. It was negligent on my part and I have learnt my lesson from that and that something of such importance, I would suggest — especially for the purpose of the future, persons involved — that it need not be negligent on important matters like this and I don’t have any specific reasons I can give you to make an excuse to that.”

After confirming that the filing of declarations was an important task, Vanterpool was asked why he found it to be such an onerous obligation.

He declined to accept that characterisation and instead stuck to his earlier statement that he was simply negligent and offered that he would not add or subtract from that description.

“That is the best explanation I can give,” Vanterpool stated.