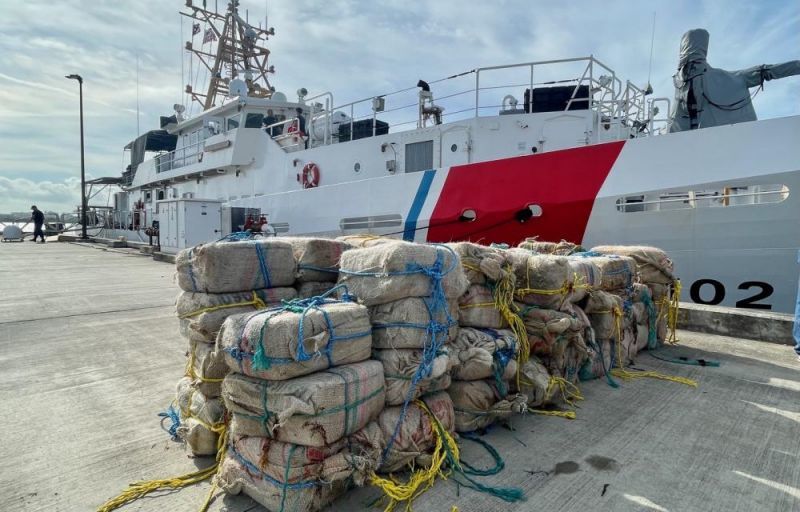 The US Coast Guard has announced that the Coast Guard Cutter Richard Etheridge crew offloaded approximately 1,700 kilograms of seized cocaine at Coast Guard Base San Juan Friday, September 3, 2021, following the disruption of a go-fast vessel smuggling attempt by Coast Guard and [British] Virgin Islands authorities near Anegada a few days prior.

This disruption and seizure is the result of multi-agency efforts involving the Caribbean Border Interagency Group and the Caribbean Corridor Strike Force, the Coast Guard said. The seized cocaine has an estimated wholesale value of approximately $51 million dollars.

“Despite the challenging sea state conditions and thanks to the close collaboration and coordination with our Royal Virgin Islands Police partners, our crews did an outstanding job in disrupting a major shipment of cocaine and keeping it from ever reaching the streets,” said Captain Gregory H. Magee, Sector San Juan commander.

“Our strong partnerships, as in the case of the British Virgin Islands and island nations throughout our area of responsibility, are key to achieving safe and secure maritime borders from drug trafficking and other smuggling threats in the Eastern Caribbean.”

“This is a great example of the close working relationship between the US and the UK overseas territories,” said Detective Inspector Mike Jones, Head of Intelligence for the Royal Virgin Islands Police.

“The excellent work of the US Coast Guard forced the crew of the go-fast vessel to jettison their cargo. We will continue to work closely with all agencies and partners in order to disrupt and detect the movement of narcotics, illegal money and people trafficking," Jones added.