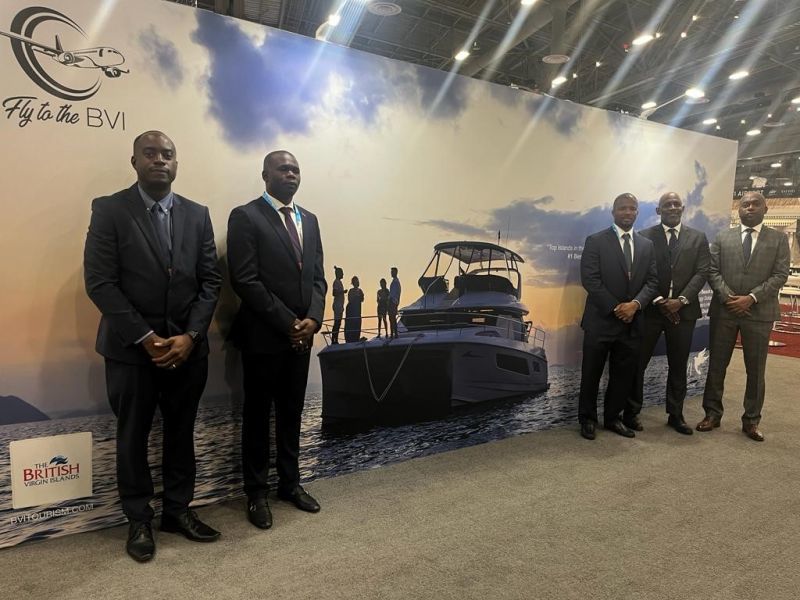 The Virgin Islands’ delegation led by Minister for Communication and Works Honourable Kye M. Rymer (R5) to the recently concluded Routes World 2022 forum in Las Vegas, USA is said to have scored some very promising leads for increasing airlift to the Territory.

According to Minister Rymer, most of the airlines were very intrigued by what the VI has to offer as a travel destination and several expressed interest in having further discussions for route development.

“We received multiple requests to supply further technical information for airlines to review their position on flying to the BVI and requests for follow-up conversations,” the minister said.

Honourable Rymer added, “We also received interest from one airline with respect to charter options to the mainland USA, which is a possibility with the support of some of our industry partners. Another popular airline is very interested in considering a codeshare with a ferry service to the BVI from St Thomas. We also discussed with certain airlines how they can factor into our route development plans to make it easier for persons in more US states to connect with flights to come to the BVI.”

Minister Rymer said while the current runway length at Beef Island was a prohibitive factor, airlines indicated they would be anxious to come to the VI as soon as the runway is extended.

“They told us they are seeing that a significant number of their passengers have the VI as their final destination. So, they know our potential once it becomes possible for them to land and take off. They have no doubt about the viability of our destination. This kind of interest and information will be very handy as we continue working on our plans for extending the runway.”

While seeking direct flights between the VI and the US Mainland was a high priority, the delegation’s aims also included increasing overall aviation connectivity to the Territory and the overall volume of flights and passengers coming through its airports, as well as promoting the VI as a top quality and high-value tourist destination and attracting more visitors.

The delegation met with executives from eight airlines including American Airlines, JetBlue, Air Canada, Spirit, Frontier Airlines and United Airlines, among others; officials of two Airports Authorities; one tourism body; and one airport management company.

The annual Routes World event is the premier global forum for the commercial aviation industry. It brings together the global route development community with over 2,500 major service providers in all aspects of the industry from around the world under one roof. The event is attended by senior executives of airport authorities, airlines, destinations, and other stakeholders who use Routes to make introductions, establish and build networks, promote destinations and services, host extensive meeting opportunities and provide exclusive industry insight on airlift and destination. This year’s event was held from October 16 to 18.

Among the opportunities for route development and increasing airlift to the VI generated in the talks was the potential for further cooperation with the Airports Authorities of Sint Maarten and Guadeloupe. Additionally, emerging from the discussions, officials from Sint Maarten and Puerto Rico indicated that improvements can be expected to their facilities which would enhance the experience for passengers travelling through their airports to get to and from the Virgin Islands.