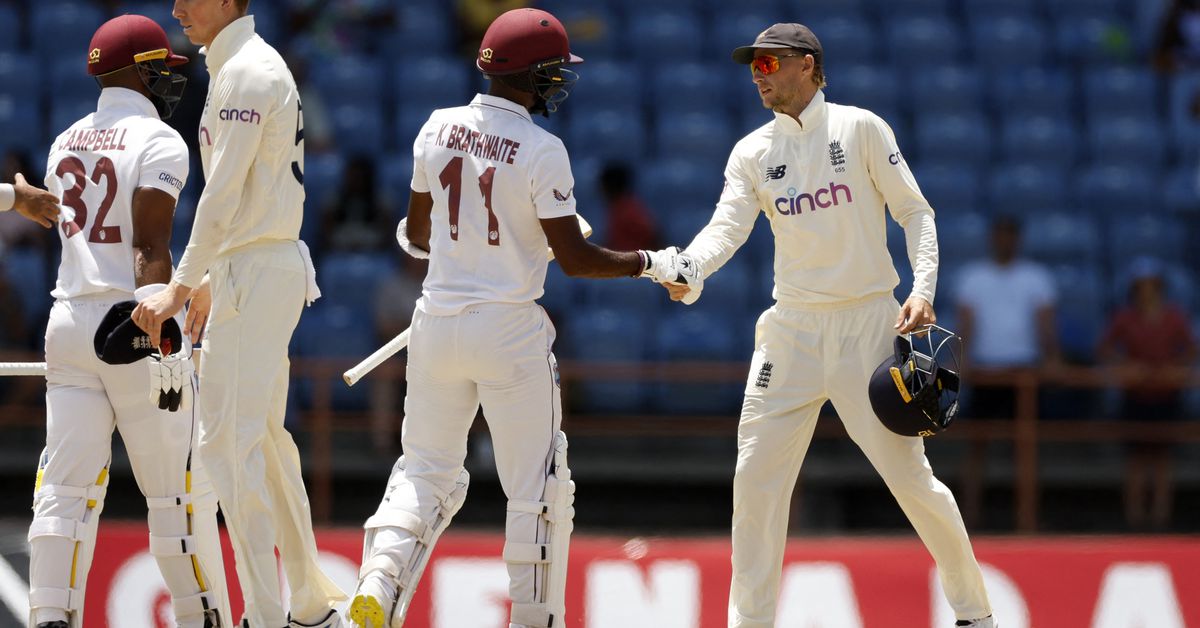 West Indies clinched the Botham-Richards Trophy with an emphatic 10-wicket victory over England in the deciding test on Sunday, a result that few saw coming after the hosts' mediocre performances in the first two tests.
After gratefully escaping with draws in Antigua and Barbados, brilliant solo performances by Joshua Da Silva with the bat and Kyle Mayers with the ball were largely the difference between the two teams in the deciding Grenada test.

An unbeaten first-innings century by wicketkeeper Da Silva gave West Indies a handy lead on Saturday, before Mayers rammed home the advantage by taking 5-18 in the second innings with his seemingly innocuous-looking medium pace.

Chasing a token target of 28 in their second innings, West Indies reached it without loss, captain Kraigg Brathwaite fittingly hitting the winning runs to seal a 1-0 series triumph and end another barren England trip to the Caribbean.

Brathwaite was named Player of the Series on the back of his batting in the second test, where he saved West Indies with a marathon first innings of 160 followed by an unbeaten 56.

With the ecstatic home fans dancing in the stands, and the Barmy Army unusually if understandably quiet, Brathwaite acknowledged that the series could have gone either way.

"Yesterday was a really remarkable day for us, to show the fight and attitude we had from the get-go, it's key to carry that forward," he said.

"We can't take it for granted. It's easy to be happy with a series win and relax but I don't think we can relax. We've got to stay hungry."

Even before the England team trudged off the field in dismay, commentators were calling for Joe Root to step down as captain, though the man himself indicated a desire to continue in the job.

Although one of the world's best batters, with a test average of nearly 50, Root has rarely looked a natural leader and has earned a reputation as an unimaginative captain.

"For his own sanity he needs to have a long think about what he does with his future," said former England bowler Steve Harmison.

A tour that was meant to be a "red ball reset" after a 4-0 Ashes away loss to Australia only raised more questions than it answered about the immediate future of English test cricket.

Without James Anderson and Stuart Broad, both controversially omitted for the series, the bowling attack lacked a cutting edge, though the solid debut of Saqib Mahmood was a bright spot.

Similarly too the batting was inconsistent, not withstanding two centuries by Root, while opener Alex Lees also impressed with his decision-making and discipline in the final two tests after a poor debut in Antigua.

England resumedon Sunday with a lead of only 10 runs and two wickets in hand, and stout resistance by Jack Leach was merely a stay of execution as Kemar Roach picked up both wickets.

He broke a stubborn partnership with his first ball of the morning, having Chris Woakes caught brilliantly one-handed by Jason Holder at leg-slip for 19.

Leach was caught behind from a thin edge for four, off 55 balls, though it needed a review after the umpire gave a not out decision, leaving England all out for 120.