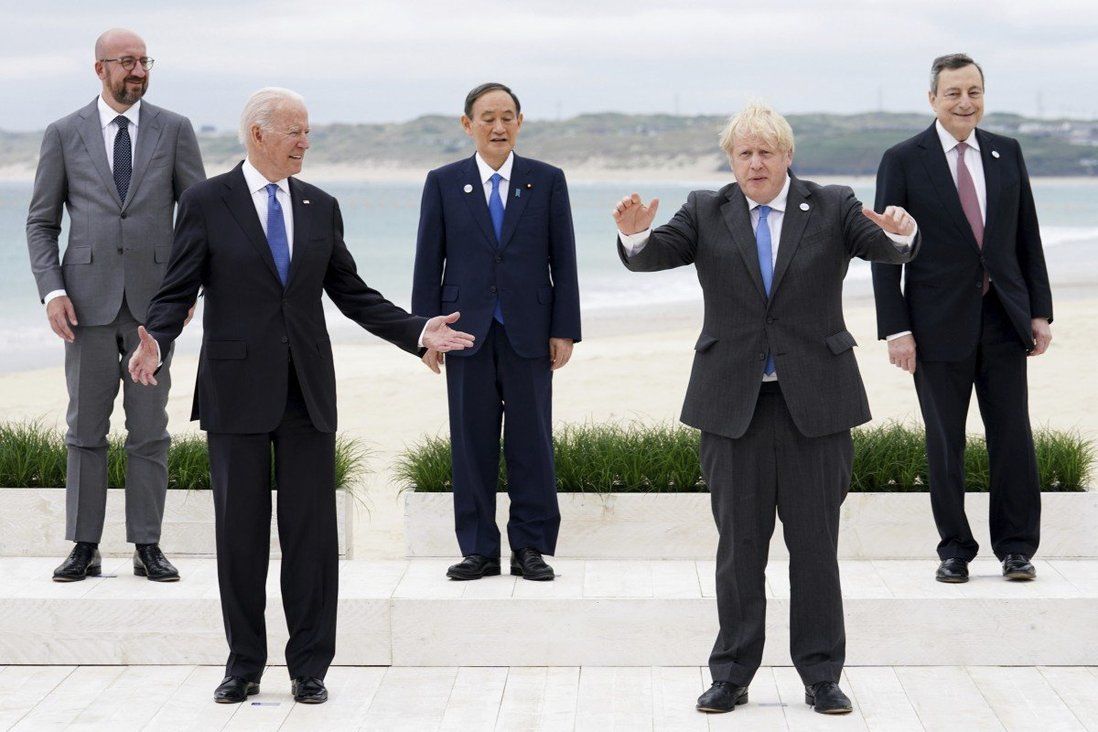 What is a global minimum tax, and how will it work?

The global minimum tax rate proposed by the Group of 7 (G7) aims to clamp down on tax evasion and prevent countries from competing by offering lower taxes to attract multinationals.

Group of 7 (G7) leaders agreed in early June to set a minimum global corporate tax rate of at least 15 per cent.

Years in the making, the deal means global businesses such as Google, Apple and Amazon will pay more tax in the markets they sell goods and services, and prevent multinationals shifting profits to jurisdictions where they pay little or no tax.

But before it can be implemented, there are still a number of hurdles to clear, including getting the 139 nations under the aegis of the Organisation for Economic Co-Operation and Development (OECD) on board.

The deal between the United States and its G7 partners Britain, France, Japan, Italy, Germany and Canada will go to finance ministers from the Group of 20 (G20) nations, including China, for support in July. Ahead of the meeting, here are some of the issues concerning the global tax and its application.

How would a global minimum tax work?

The global minimum corporate tax rate aims to clamp down on tax evasion and prevent what US Treasury Secretary Janet Yellen called a “race to the bottom on corporate taxes”.

The G7 proposal contains “two pillars”. Firstly, the world’s most profitable multinationals will be required to pay tax in all countries where they operate – not just where they have their headquarters.

Large firms with at least a 10 per cent profit margin would see 20 per cent of any profit above the margin reallocated and then taxed in each country they operate in.

Once implemented, pillar one could pave the way for the removal of unilateral digital services taxes that some countries currently use to tax the world’s internet giants.

Under the second pillar, companies will pay a global minimum tax of “at least” 15 per cent on a country-by-country basis, ensuring governments cannot try to outdo each other by creating a low tax environment to attract multinationals.

Who stands to lose from the tax reform?

After the G7 announcement, Yellen hailed the corporate tax floor of 15 per cent “a significant, unprecedented commitment” to level the playing field for businesses and encourage countries to compete on a positive basis.

France wants a minimum rate to be as high as possible, potentially above the level agreed by the G7, and implemented in as many sectors as possible, the country’s finance minister Bruno Le Maire has said.

There has been a positive response outside the rich G7 nations, too. Finance ministers from some G20 nations, including Australia, Indonesia, Mexico and South Africa, have already expressed support for the plan. But it still requires endorsement from Argentina, Brazil, India, South Korea, Russia, Saudi Arabia, Turkey and China, whose statutory tax rates are higher than the proposed floor.

International Monetary Fund managing director Kristalina Georgieva, who attended the G7 meeting, said in early May a global tax minimum was “urgently needed to avoid, down the road, the risk of spiralling into a chaotic tax or trade war where everyone loses.”

But the proposal is likely to find resistance from tax havens, as well as several European nations. British overseas territories like Bermuda, the British Virgin Islands and the Cayman Islands – which together account for 18.1 per cent of the world’s corporate tax abuse risks, according to the Tax Justice Network – stand to lose most from the reform.

Low tax European jurisdictions like the Netherlands, Switzerland, Luxembourg and Ireland are also at risk.

Irish Minister for Finance Paschal Donohoe, for example, has warned the country could lose between €2 billion to €2.4 billion (US$2.86 billion) a year, equivalent to a fifth of the state’s annual corporate tax revenue, under the proposal, according to The Irish Times. The country is still advocating for its current 12.5 per cent corporate tax rate.

Even if the legislation is adopted, tax havens around the world may try to offset its impact with other tax perk.

What is the potential effect on mainland China and Hong Kong?

China, which has a nominal corporate tax rate of 25 per cent and grants a 15 per cent rate to some hi-tech companies, has not released an official position on the reform.

Rich nations are concerned that Beijing may seek exemptions for certain sectors as the negotiations go into the next phase, but Chinese analysts say the initiative has few potential risks for the country because it is already a magnet for global investors.

Some policy advisers believe Beijing’s involvement with the US-led global tax proposal could be used as a bargaining chip to reduce US tariffs on Chinese imports.

The median tax burden of foreign-funded companies in China between 2008-17 was 26.84 per cent, and 26.13 per cent in 2017, according to a Renmin University report released in July 2019, which was calculated using financial data from thousands of companies registered in the country.

Over the study period, the median corporate income tax rate was 19.7 per cent, slightly lower than 19.94 per cent for state-owned owned enterprises, but higher than 17.79 per cent for private Chinese companies. The rate was 17.27 per cent in 2017.

The global minimum tax has more potential risks for Hong Kong – the seventh-largest tax haven in the world and the largest in Asia, according to the Tax Justice Network – through which some 70 per cent of foreign investment from the Chinese mainland is now channelled.

One of the key advantages for a business to establish itself in Hong Kong and source its mainland-generated revenue is its low tax burden, so forcing Hong Kong to raise its corporate taxes could reduce its appeal as a business location. The city’s de facto tax rate is often lower than the statutory 16.5 per cent.

After the G7 agreement was announced, Hong Kong Financial Secretary Paul Chan said the proposed changes to the global tax regime might affect some of the tax concessions the government offers to various industries.