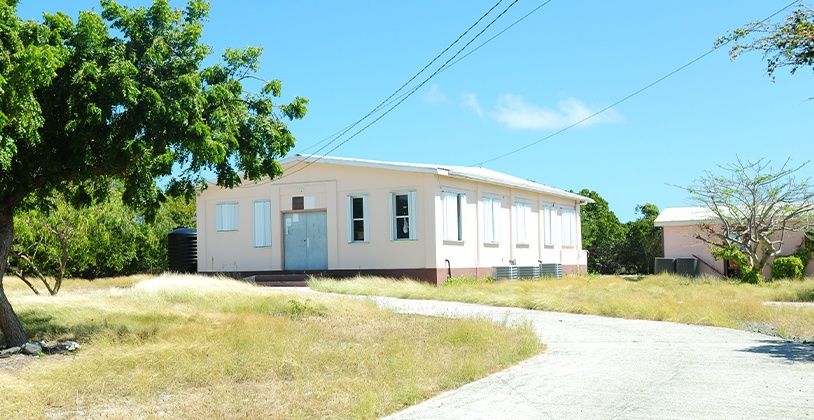 Lawrence Wheatley Construction was awarded the contract to repair the Emile E. Dunlop Community Centre on Anegada which serves as a primary emergency shelter for residents on the island.
Pan American Health Organization (PAHO) Representative for Barbados and Eastern Caribbean Countries, Dr. Yitades Gebre, said works on this facility will focus mainly on non-structural elements such as replacement or strengthening of the roofs, upgrade of windows and doors; flooding, energy efficient light and water fixtures; and improvements in functionality and ensuring that they are in full compliance with international shelter standards as well as smart standards. Attention will also be paid to improving drainage and security around the perimeter of the buildings.

In a government press release, Premier and Minister of Finance, Hon. Andrew Fahie said he was pleased that a resident contractor had won the bid and that this demonstrates the level of capacity that now exists on island to undertake works that meet standards set by PAHO.

“I am so pleased that Lawrence Wheatley Construction, a local contractor on the island of Anegada, has won this bid. The extensive capacity building initiatives that have been implemented over the past few years has allowed for this company to put its bid forward, to meet the international procurement standards set by organizations such as PAHO and to have the technical and administrative skills to undertake the works," he stated.

Premier Fahie said he is grateful to PAHO for offering opportunities for the local contractors to be part of this important project, to offer them an opportunity to further enhance their skills and to support the economic activity in the Virgin Islands.

He said, “I am very pleased that so far three of our local contractors have won bids to undertake construction works at emergency shelters throughout the Territory. Quality Construction, who completed the works at the West End Community Centre; Tarris Hill Associates Ltd at the Valarie O. Thomas Community Centre; and now Lawrence Wheatley Construction at the Emile E. Dunlop Community Centre."
Premier Fahie continued: "We are well on our way to ensuring that the

knowledge and skills are available among our contractors to rebuild this Territory in a safe, healthy and green way to meet the SMART standards promoted by PAHO and the EU.”

The designs for the facilities were also done by PAHO’s technical experts, located in the Virgin Islands, who partnered with regulators to ensure that the plans were approved through the local planning and building authorities and that the costs estimates were in line with the current local rates.

This resilience building project will see the retrofitting on four emergency shelters and the provision of appliances and equipment for ten is being financed by the European Union (EU) through a formal agreement with PAHO. PAHO is providing technical oversight for the implementation of the project aimed at improving national emergency response and increasing community preparedness. The four community shelters to include the West End Community Centre, the Valarie O. Thomas Community Centre in Sea Cow’s Bay, the Emile E. Dunlop Community Centre on Anegada and the Gertrude and Christiana Warner Community Centre in Purcell Estate
#the Virgin Islands  #Fahie